Indisputably, Tajikistan lives up to its appellation as ‘The Roof of the World’. This is a land of altitude and the staggering scenery that accompanies it: 90% of the country is mountainous and the majority of Tajiks are rural dwellers, whose hospitality and generosity are at the heart of any experience travelling here.

To explore this region is to walk with the famous and infamous who have gone before.

The nation formed a natural barrier between the great empires of China, British India and Russia and before that was fought over by Alexander the Great and Genghis Khan. The resulting multitude of historical sites is only paralleled by the drama of the scenery and its invigorating sense of isolation and discovery.

Our remarkable group tour and tailor made trips lead you along time-trodden paths, where traders on the Silk Road converged and where empires have risen, clashed and fallen. Your exploration of this rugged land will lead you eastwards and upwards from the capital Dushanbe, with its imposing nearby fortress ruins at Hissar.

The ultimate in Asian road journeys, the Pamir Highway wends its dizzying way through the highest mountain pass and highest lake in Central Asia, and past extraordinary evidence of ancient civilisations is the sequestered Pamir Mountains landscape – the Saka graves from 5,000-3,000 BC and 8,000 year old Neolithic rock art.

Everything very well organised both in the UK and in Tajikistan. Johma (driver) was exceptional, understanding our interests and accommodating them. Always helpful and a good, safe driver.

Places to visit in Tajikistan and on our Silk Road tours 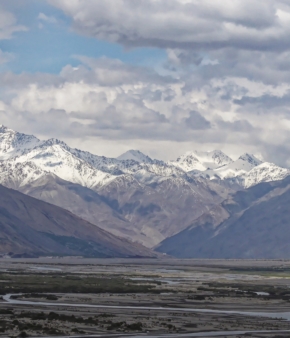 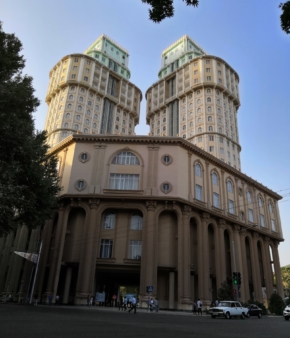 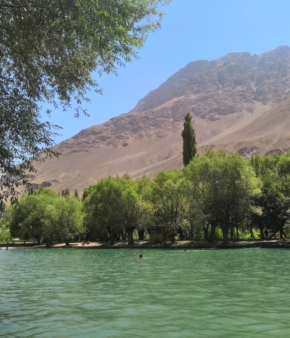 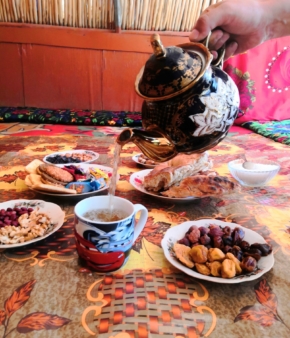 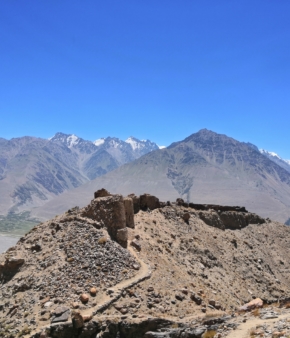 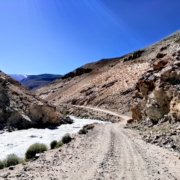 In such a wild and far-spreading country, a mere 7 and a half million people make up the Tajikistani nation; this sense of space, sky and high altitude magnificence pervades everywhere. Rising from the verdant Vakhsh and Kofanikhon river valleys of the south-west, soaring mountains greet your every move. Amidst the eastern altiplano of the imperious Pamir Mountains, this feels like true exploration: extraordinary and ancient archaeology alongside homestay with local people makes for an immersion in Tajikistan’s culture which will long and enthralling endure in the memory.

Tajikistan is a land of a thrilling concoctions and contrasts: the dominant landscape of mountain valleys and scattered populations has developed into complex arrangements of vying clans, sundry languages and confusing origins. The dominant language is Persian, though the dizzying high lands of the Pamir plateau boasts a multitude of ancient tribal tongues which speak of millennia of influences.

At a crossroads on the network of silk roads, the consequent wealth has brought on its heels invaders and explorers: by the 5th century B.C. Scythian culture was dominant and this developed into a series of successful Persian-influenced empires – the Sogdians in the west being subjugated Alexander the Great in 327 B.C.. Huge cultural diversity followed, exemplified by ruins that tell of Kushan, Graeco-Bactrians, Sasamid and Tukic civilisations.  By the 8th century A.D. Arab invaders from Mecca’s Umayyad Empire brought an entirely different ethos to the region and the defeat of the Chinese, whose vast empire lay to the north-east, at Talas in 751 cemented their lasting dominance: Islam became the central religion and Persian the main language.

The conquering powerhouse that was Genghis Khan swept across the Tajik people’s territories in 1219 and this led to a series of ever more stable khanates which perpetuated until the arrival of the Russians in the 19th century. In the intervening period, Marco Polo’s great expedition achieved the seemingly impossible: making a Silk Road link between Europe and India, the route which travellers now tread along the extraordinary Pamir Highway. This is true wilderness, where rarities dwell, such as the Marco Polo sheep – the world’s heaviest breed, sporting horns of imperial grandeur – grey wolf packs, brown bear and, the jewel in the country’s wildlife crown, the highly elusive snow leopard.

The Russians who first ‘explored’ and then sought to set up vassal states tried to penetrate the eastern massif in order to threaten the British Indian Empire in what was termed ‘The Great Game’. The inaccessibility of the Pamir region meant that it became a buffer zone, almost fabled in its reputation, with credible accounts of yeti told by returning soldiers! Tajikistan subsequently fell under the yoke of the USSR and its modern borders were formally drawn up in 1927, eventually leading to a brutally won independence after the civil war of the 1990s.

Today its inhabitants welcome once forbidden outsiders with instinctive warmth, opening their homes and yurts to share with visitors so that immersion in Tajikistan’s culture is an inescapable and unforgettable part of its charm.

Read more about Tajikistan and our other Silk Road tours.