Bolivia
To the High Andes Tour

Bolivia is South America’s highest and most remote country, bordered by Peru, Brazil, Argentina, Chile and Paraguay, with no access to the ocean. It’s also a country characterised by indigenous people, who make up almost two-thirds of the population, more than any other South American state. Bolivia today is a rich country; it has the continent’s second largest natural gas reserves.

However, the exploitation of this gas by foreign enterprises is highly contentious, and the distribution of the country’s wealth remains starkly iniquitous. A 2019 a constitutional crisis and widespread protests saw the resignation of the country’s first indigenous president, Left-leaning, Evo Morales, after a disputed election. Currently Morales is in exile in Mexico and his political supporters, a majority in the Bolivian parliament, refuse to recognise the self-declared interim president, Jeanine Áñez. Interesting times indeed.

This tour explores Bolivia’s lowlands and Andean highlands, visiting many of its major natural sights, and also its cultural sights, from pre-history, through Inca civilisation, European colonisation, to the present day. If you’re looking for microcosm of South America, be it on country-size scale, Bolivia fits the brief very well.

Often overlooked in favour of its more famous neighbour Peru, Bolivia offers the adventurous traveller just about all you could want from a trip to South America, without the numbers of tourists found in other areas.

On this two week trip we journey through a variety of landscapes from the steamy jungles of the Amazon to the desolate and foreboding salt flats of Uyuni, nestled up against the border with Chile. We visit the lovely Jesuit churches and pretty villages of the Chiquitania, region and the colonial cities of Sucre and Potosi with their amazing architecture, which transports us back to the days of the conquistadors.

We also take time to delve into ancient cultures at Tiwanaku, and embark on an adventure through the mountains of the High Andes, where the barren landscapes have to be seen to be believed.

Bolivia is a hotbed of nature, adventure and culture that should be high on the list for any prospective visit to South America.

Arrive in the atmospheric city of Santa Cruz de la Sierra and transfer to hotel accommodation. In the afternoon there’s walking tour of the city, taking in the busy main square of 24 de Septiembre, the church of San Lorenzo, the History Museum and the handicrafts market of Recova Vieja. Overnight at Hotel Americana or similar.

After breakfast we explore the Chiquitania region of eastern Bolivia, known for its picturesque hamlets and unique Jesuit churches. At San Javier the village is home several historic churches and a number of traditional ‘ateliers’ skilled in the manufacture musical instruments. Later we continue village of Concepcion and visit workshops involved in restoration efforts. Overnight Hotel Chiquitos or similar. (BLD)

This morning we take the opportunity to admire the eye-catching Cathedral of Concepcion before returning to San Javier for lunch. Afterwards we return to Santa Cruz de la Sierra where the rest of the day will be free to relax or explore independently. Overnight Hotel Americana or similar. (BL)

This morning we head to the airport and board a short flight south to ‘The White City’ of Sucre. On arrival we drive to the Recoleta viewpoint for panoramic vistas across the city. Afterwards we visit Museo Asur to learn something of the development of the region’s textile industry. Later we continue on foot to see the city’s colonial buildings and churches, stopping at the Convent of Santa Clara and the church of San Felipe Neri where an ascent of the bell tower offers great views across. Overnight Hotel Monasterio or similar. (B)

Today we gain an insight into the history of Bolivia by visiting the museum of Casa de la Libertad, the site of Bolivia’s declaration of independence. Afterwards a short drive leads to the impressive paleontological site of Cal Orck’o where the rock face preserves thousands of dinosaur tracks. Later we return to Sucre for lunch. After some free time to relax we head into town and visit a busy market, then take a stroll through Bolivar Park to see its bizarre smaller replica of the Eiffel Tower. Overnight Hotel Monasterio or similar. (B)

This morning is free to relax or explore independently. Later we depart for Potosi City, driving through beautiful countryside and stopping at Lajasmayu to examine ancient Neolithic rock paintings. We should arrive in Potosi by early evening. Overnight Hostal Colonial or similar (B)

Today we travel by bus to visit the mines of Potosi. After donning appropriate clothing, including a helmet and torch, we take a short ride to the Cerro Rico (Rich Mountain). Every day miners celebrate the pre-Christian ritual of the Challa, with offerings to Tio, the demon said to own underground mineral riches. In the afternoon we visit the Money Museum where artefacts of a bygone age, including machinery, utensils and coinage are displayed. Overnight Hotel Santa Teresa or similar. (B)

Today the morning is free to relax or explore the city independently. After lunch we drive to the town of Uyuni. Overnight Hotel Tambo Aymara Hotel or similar. (B)

This morning we take a short journey to visit the ‘graveyard of trains’, a collection of historic steam locomotives and railcars dating back over a hundred years. Afterwards we continue to the village of Colchani and witness how natural salt is processed using simple ovens and basic tools. Colchani lies at the entrance to the famous Uyuni salt flat. We travel across the featureless salt for three hours, guided only by wheel tracks in the surface crust. At Incawasi Island we stop to explore an area of giant volcanic rocks and hundreds of giant cacti. The journey across this remote area is undoubtedly one of the highlights of the trip. Later we leave the salt flat and head towards the hamlet of Quemes. Overnight Tayka Hotel de Piedra or similar. (BLD)

Today we pass the lava flows of Ollague and the colourful lakes of Chiguana, Hedionda and Honda, home to great concentrations of Andean birds. The approach to Ojo de Perdíz is marked by huge rock formations sculpted by the wind, before shrubby vegetation disappears completely and gives way to dunes. In the middle of the desert, at 4,600m, we arrive at a country hotel. Overnight Tayka Hotel del Desierto or similar. (BLD)

After breakfast we drive to Laguna Colorada, resplendent in a burnt orange hue as a result of algae in the water. Mineral deposits line the shores, along with large populations of flamingos. Afterwards we continue to the extreme southwest of Bolivia, passing by the geysers of Sol de Mañana at 4,950m, and arriving at the hot springs of Chalviri for a late breakfast, and some time for bathing. Later, we pass through the Salvador Dali desert en route to Laguna Verde, stopping at the lake for lunch before returning to Ojo de Perdíz for a second night. Overnight Tayka Hotel del Desierto or similar. (BLD)

Today we return to Uyuni following a more direct route, passing by the Canyons of Mallu, the Valley of Rocks and the Negra Lagoon. We arrive by mid-afternoon, in time for a late lunch, leaving the rest of the day free to relax. Overnight Hotel Tambo Aymara or similar. (BL)

This morning we catch a flight to La Paz and head to Tiwanaku to explore the archaeological site’s pre-Inca temples and palaces. We return to La Paz in the late afternoon. Overnight Hostal Naira or similar. (B)

Today we explore the sights of La Paz, including the main square Plaza Murillo, its surrounding streets and 16th century colonial architecture. Afterwards we visit the Museum of Magic Instruments, the Indian market, and also the Witches Market, known for mysterious potions and magical amulets. Later we drive to the Mi Teleférico cable car station for a journey across the city, from north to south, and then head to Moon Valley, a maze of canyons and pinnacles formed by wind and water erosion. Overnight Hostal Naira or similar. (B)

At your convenience we transfer to the airport for your onward flight. (B)

Return flights from London into Santa Cruz and return from La Paz start at £1000. Contact us for a quotation.

Kindly note that we can also tailor a similar or totally different itinerary to meet your requirements. Please get in touch with Linda so that I can tailor your perfect tour of Bolivia.

Did you know you can do our Argentina and Chile Puna & Atacama Experience tour directly before our Bolivia tour? 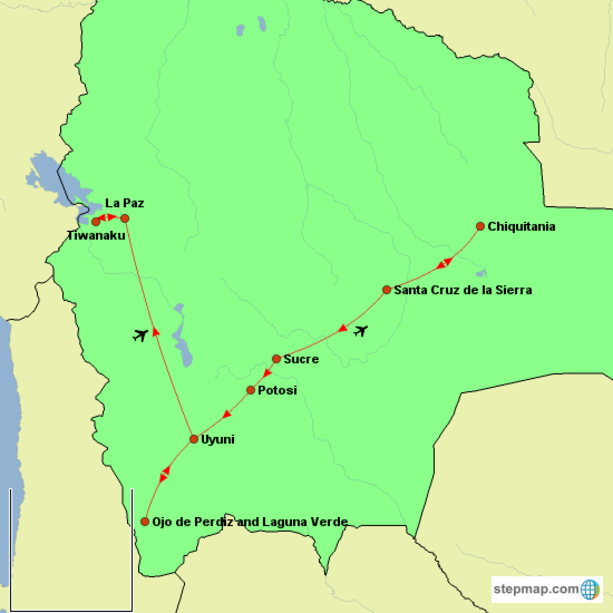