Aled Evans from Undiscovered Destinations had heard of the Azerbaijan Formula 1 race but not much else before his visit. On this small group tour of the couintry, he discovered that there is a great deal more to see.

I knew all about the Azerbaijan Formula 1 race but what else was there to see and do in this little visited corner of the world? 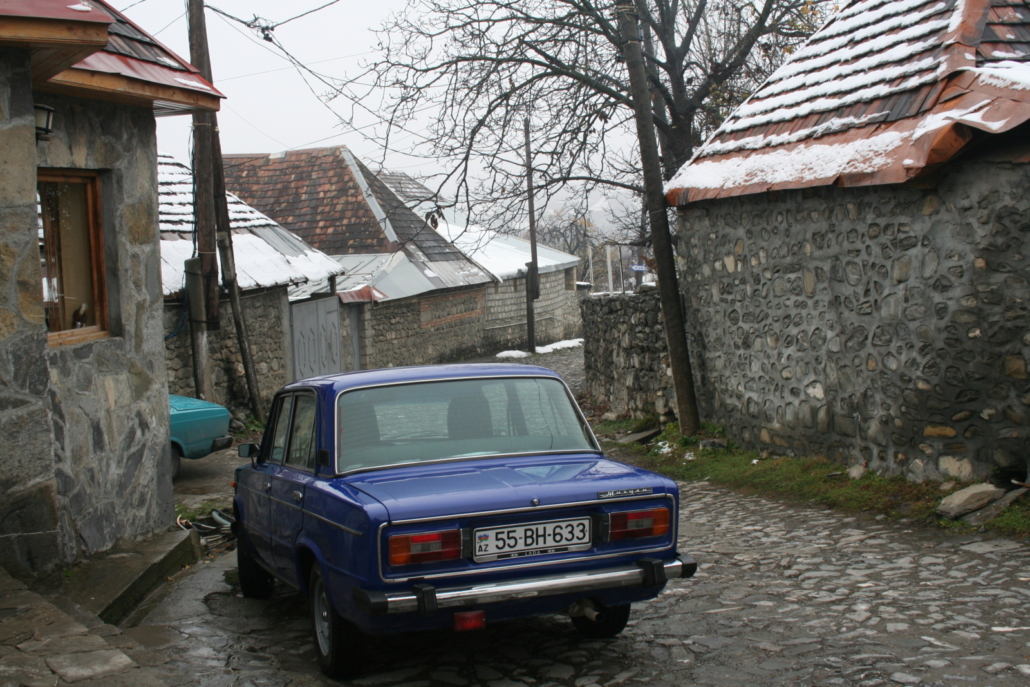 My arrival in to Azerbaijan and Baku at 5am in the morning was a pleasant surprise. A small queue at the immigration desks and my slight concern about the visa on arrival was soon quashed.

The stern looking immigration official burst in to laughter when I explained the picture on the visa showed me with a beard but that my wife had insisted I have a shave before leaving. ‘Good decision’ he said in perfect English as he stamped my passport with an entry visa.

Having collected my bags and clearing customs in just 10 minutes, I was greeted by a smiling couple holding a board with my name on. This was my driver, Petr and guide Anna and they would be with me for the next few days as I explored Azerbaijan.

I have to say that Baku is a stunning city and one of the nicest I have ever visited. It is a mix of old European boulevards that reminded me of Paris, coupled with an old city to rival any in the middle east and new modern developments that rival new super cities such as Dubai.

Baku is most famous these days for the Azerbaijan Formula 1 race that takes place every year. These high powered racing cars hurtling through the narrow Old town parts of Baku is a stunning sight.

All the Azerbaijanis that I spoke to are extremely proud of the development of the city and are constantly comparing Baku to Dubai.

The high number of designer shops, Italian sports car retailers and top end hotels and restaurants certainly gave the impression that this was a city on the up. Don’t let that bravado and showmanship put you off though, as Baku has managed to retain a unique character that I found charming.

A fascinating tour of the city, both old and new was a great introduction to Baku and the history of the country.

The chill from the wind was particularly biting at the peak over-looking Baku but well worth enduring for the views and the spectacular sight of what was once the world’s largest flag and flagpole flying in the breeze. We continued on to our next stop which was the Absheron Peninsula.

The mile upon mile of nodding donkeys that we drove past gave a clue as to the wealth that is driving the development of Baku and the burning hillside of Yanardag was another example of the rich natural resources the country is blessed with. From beneath the earth flammable gases seep through the porous sandstone, erupting into flames that can reach 10 metres in height.

These flames have never been extinguished having been lit accidentally in 1958. Following from this, a visit to the ‘fire-worshippers’ temple of Ateshgah was a fascinating insight in to how these natural resources have drawn people to the country for centuries.

The next day we set off for, what for me was one of the highlights of my visit to Azerbaijan. Gobustan is a UNESCO World Heritage Site, rich in archaeological monuments with over 6000 rock engravings dating back as much as 40,000 years.

The petroglyphs depict ceremonial dances, battles, warriors, boats and many other scenes, as well as more recent Roman ‘graffiti’ from the 1st century, all expertly explained and pointed out to me by Anna.

The museum at Gobustan is especially good with interactive displays showing how the surrounding area would have looked over the millennia.

We continued on to the delightful town of Sheki. Once an important centre on the Trans-Caucasian trade routes, it was an independent khanate up until the 1820s and evidence of its former grandeur is not hard to spot. The splendid Khan’s Palace which was built in 1762 is a work of art to rival any in Europe.

I was lucky enough to meet one of the craftmen who are still creating the stunning windows and panelling elaborately decorated with ornate patterns.

The highly skilled craftsmen use no nails or glue, putting together the panels like a giant jigsaw puzzle. A tour of their workshop and a chance to meet some of the young apprentices keeping this traditional skill alive was a wonderful way to finish off the day.

My journey continued with a drive through the mountains and to Ganja, Azerbaijan’s second city. Ganja was a complete contrast to Baku, feeling and looking like a city from a 1950’s soviet spy film. This impression was enhanced by the sight of an army General walking down the street in full uniform and the streets full of old Lada’s.

The house made of bottles, located on a corner of a bustling street has a story that pulls at your heart strings and is a real work of art. Due to my time constraints we had to leave Ganja and begin the long drive to Baku. Stopping off at road side cafes and taking in the national pastime of drinking tea, the journey passed quickly.

We arrived to see Baku lit up in all its glory, impressive during the day, this city is even more impressive at night, with the Flame Towers (the tallest skyscraper in Baku) shimmering and changing colour as we approached.

I spent my last night of my Azerbaijan tour in a local restaurant, sampling the delightful local food and the surprisingly good Azerbaijani wine, while reminiscing about a journey that surprised, enthralled and delighted in equal measures. Although still best known for the Azerbaijan Formula 1 race, there is so much more to this country.

GO TO BLOG
Expectations exceeded on a visit to Romania

Authenticity on this tour of Bangladesh
Scroll to top