Forget the war-torn clichés and stark monochrome images seared into our visions of Vietnam: this is a country as alive and vividly vibrant as any corner of the globe.

Blessed with a fascinating modern history encapsulating the vicissitudes of world politics and wonderful relics of the distant past, tourist hotspots like Hanoi contain imperial gems that beg exploration. Yet the less-trodden ways of the delightful rural extremities hide an even greater treasure trove of cultural delights.

Here are myriad picturesque villages, amidst emerald tiered rice fields, which open their homes with disarming hospitality to those enthralled by their timeless crafts, intricate agricultural skills and incredible cuisine, making for some truly mesmerising experiences.

Joining us on our group tour and tailor-made trips will take you on a journey through the hidden corners where a veritable pageant of tribal diversity dwells amidst some of the most beautiful scenery in South East Asia.

Immerse yourself in villages that have clung on to ancestral practices and skills for generations, a landscape of cascades of thatched houses and palms, buttressed by paddy field terraces, reached by circuitous dirt tracks, whilst in the higher reaches, the scenery gives way to a coolness that supports labyrinths of tea plantations.

Finally, easing out of nature’s bountiful heartlands, the towns and cities of the river valleys, offer glimpses of the tumultuous history of Vietnam’s wars and uprisings in visceral tours of colonial prisons and scenes of dramatic battles, revealing why this is a land which shocks, delights and intrigues in equal measure.

Places to visit in Vietnam and on our Vietnam tours 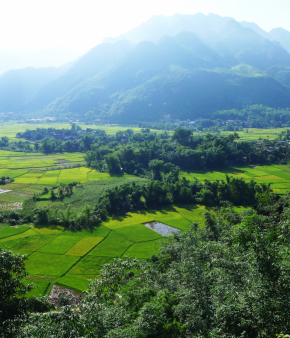 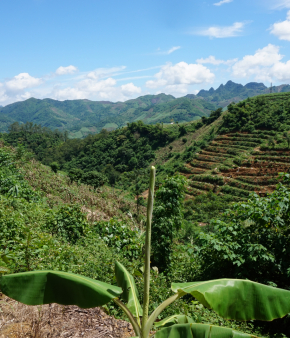 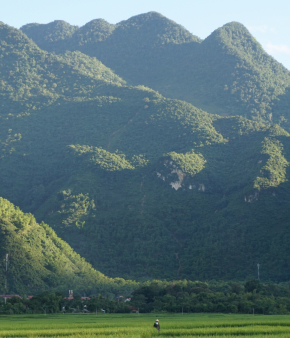 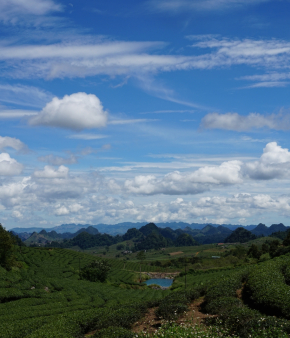 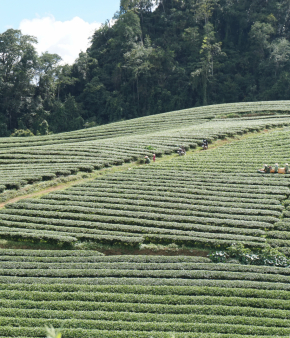 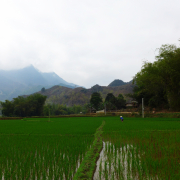 Having repeatedly shrugged off the intrusions of outside powers into the Indochina region, a few days here will reveal a nation truly on the rise, confident about its future, at peace with its past and proudly held together by the endless warmth of its people. Whether you find yourself threading through tiny paths lacing the ubiquitously delightful rural paddy-fields together, or sharing in the secrets of indigo dying with confiding Blue H’Mong village-women, or whispering in awed tones in the vaults of Son La’s cruel prison, expect to be enthralled in Vietnam.

Despite the fact that the majority of its 3,444 coastline looks eastwards, Vietnam very much has always had an eye to the north and west, simply to ensure its survival. The present day borders are largely delineated by the colossal topographical boundary of the Annamite Range that separates the country from Laos and northern Cambodia, yet the region of the Mekong Delta and the northern juxtaposition of mighty China have often shaped the destiny of this enigmatic nation. Indeed, the very name of the country was derived from a Chinese appellation for their onetime vassal state. 96.2 million people call this home, comprised of a rich spread of ethnic groups, again many of whom have their origins in China, such as the H’Mong people whose beautiful villages spread across the heavily rice-terraced north, the Thai who dwell on the borders with Laos and the Khmer whose ancestors are intertwined with the fortunes of Cambodia. This diversity is sustained by the relatively rural and inaccessible nature of the geography: still two thirds of the population live arable lives and much of the landscape is heavily forested and hilly.

The main urban populations therefore are drawn to the ancient powerhouses of Hanoi in the Red River Delta area and Ho Chi Minh City (formerly Saigon) to the south in the fertile plains of the Mekong’s lower reaches. The sense of escaping to the wilds is never far away in a hugely biodiverse region: of the 16,000 species of flora, nearly 10% are endemic and the fabulously untouched forest regions in particular contribute to the variety of avifauna – 840 species, 100 endemic – and mammals (310), reptiles (260) and amphibians (120), whilst new species are constantly being discovered here. There is very much a war waging here though between government agencies and poachers: 9 vast biospheres have been set up amidst Vietnam’s 331,212 km² and an NGO now exists to hold criminal acts against wildlife to account and to work collaboratively with local villages to support the growth of nature tourism. Equally, the vital role of foreign money from such as the US, Japan, the UK and South Korea has meant that the chemical damage done throughout the 20th century conflicts is being steadily overturned. Vietnam’s modern, reforming socialist republic is the product of a tumultuous history which now sees it as one of the most rapidly growing world economies and an outwardly looking and deeply welcoming culture.  The decline in national poverty has been remarkable and belies the vicissitudes which have so beset this area for millennia. One of the earliest scenes of human occupation, Vietnam’s farmers were working on significant scales from as early as 7,000 B.C. and the Bronze Age Dong Son culture, characterised by its metallic moko drums probably developed rice cultivation by the 3rd century BC.C. along today’s still populous Red River Delta.

The foundations for the division of the country can be seen as far back as the first century B.C., with the northern half centred around Ankor Borei’s walled city and doing widespread trade from a growing hub, whilst the Cambodian centric Hindu kingdom was very much India-leaning. This all ended with the invasion of the Chinese in the north, initially in the delta, followed by a period of annexation that lasted a full thousand years. Famous uprisings such as that by the Trung sisters in A.D. 40 came to little. By the fifth century A.D., following migration south by a technologically superior and well-administered northern Vietnamese population and the souring of diplomatic relations with the then southern Champa kingdom, China invaded and unified the region under its rule. A seminal year in the nation’s calendar came in 938 when, with the collapse of the Tong dynasty, a rebellion ended with independence. A fascinating element of the success came with the scuppering of the Chinese fleet’s attempts to regain control; lured into sailing up the Bach Dang River, they were impaled on spikes and destroyed, a feat curiously repeated almost verbatim when the hitherto irrepressible Mongol forces of Kublai Khan met the same fate in 1288. The period was one of growth, with Hanoi established as a rebuilt capital, its walls and gateways still in evidence today. The blueprint for failed invasions and occupations was set then: a re-conquest by the Chinese in the 15th century struggled in the face of support of the newly arrived Portuguese missions in 1516, leading to prolonged instability, civil war, division into the northern Trinh Kingdom and the southern Nguyen Kingdom and eventual reunification. The next assault came in the form of western colonialization under the French Indochina plan: steady encroachment and power seizing took place from 1847 to 1883 when I became a forced protectorate. Infrastructure was the greatest legacy of the foreigners, with the building of the Saigon-Hanoi railway and also the draining of the Mekong Delta marshes. As sites such as Son La’s prison indicate, intolerance of resistance was brutal and whilst the jail marks a symbol of suffering, it also acted as the spawning grounds for revolution. As elsewhere in South East Asia, the popular support for the notion of communism was on the rise and the fabled figure of Ho Chi Minh was amongst those responsible for the founding of the Vietnam Revolutionary Youth League in 1925. By the establishment of the Vichy Government and the interference by Japan during World War II which led to 2 million deaths through starvation, the independence fervour was fully behind the Viet Minh. Yet despite ousting the Japanese, international backing was for the return of the French in 1946, leading to a prolonged armed conflict that culminated in the famous defeat for the Europeans at Dien Bien Phu in 1954. The subsequent partition of Vietnam by outside powers inevitably led to the commencement of the 1959 war to ‘liberate’ the Catholic south and unite them with the communist Viet Cong led north. And so it was that the nation played host to one of the many vicarious democratic west vs communist east wars for supremacy that so characterised the 20th century. By 1965, the US had sent troops to shore up the beleaguered south and a huge bombing offensive in the north, in Cambodia and Laos, widespread napalm attacks on ‘cleared’ villages and increasing cases of massacres might well have won the day, had not the terrain and nature of the fighting favoured the Viet Cong. In 1973, under huge domestic pressure over economic and human cost, the US began withdrawing and the south fell within two years. The unified nation was not to everyone’s liking, not were the victors entirely magnanimous in the aftermath: the world’s screens portrayed the plight of the escaping ‘boat people’. Nonetheless, the progress of the socialist state has been impressive: intervention against the appalling brutality of the Khmer Rouge in neighbouring Cambodia in 1979 helped to stabilise the region and growth and progress have followed. Since the 1995 re-establishment of diplomatic relations with the USA, tourism has also started to flourish and Vietnam is now decisively on the map as a must-visit destination for lovers of intriguing history, fabulous nature and ethnic cultures that truly embrace the heart and soul of their guests.

Read more about Laos and our other tours in Asia.