It was wonderful to travel through Japan

Home > Blog > It was wonderful to travel through Japan

Linda has always wanted to travel through Japan

On her latest journey, Linda has had the pleasure of having to travel through Japan with Undiscovered Destinations. Her journey took in some of the highlights of Japan plus some lesser visited areas.

A blog as I travel through Japan

I noticed the bowing as soon as I entered the Arrivals Hall at Narita Airport.

It was an introduction to the courteous and respectful ways of the Japanese people which I enjoyed so much during my travel through Japan. 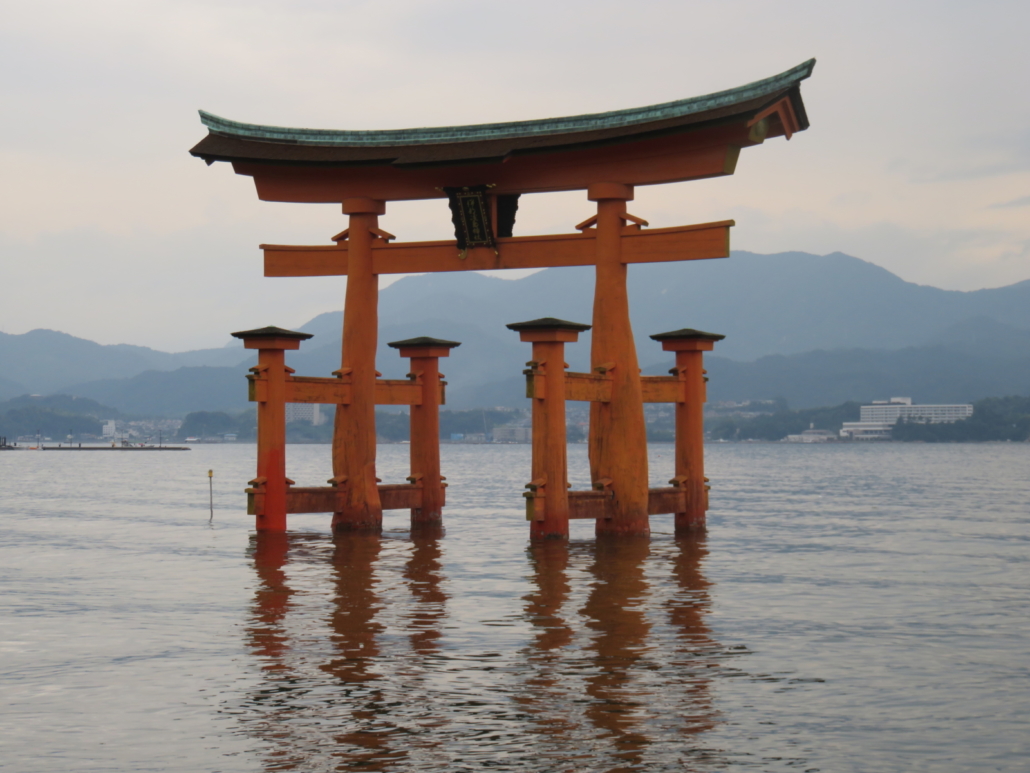 I was staying at the pleasant Park Hotel which is located from the 25th floor upwards of the Shiodome Media Tower, one of the many multi story buildings which abound in Tokyo, dwarfing everything at ground level, and offering tremendous views of the city.

On a clear day it is possible to look across to Mount Fuji from the reception area. Close by is the bizarre but quite wonderful Hayao Miyazaki Steam-Punk clock.

The next morning I tackled my first breakfast buffet of the trip- there was plenty of choice, including some dishes that I would definitely not associate with this meal; the Chilli Con Carne with avocado and pickled cucumber springs to mind.

I left the hotel for a full day of sightseeing – Tokyo is an exciting city which combines the pace and buzz of one of the world’s most developed cities with the dignity of its many centuries of history and culture. From our first stop at the garish Tokyo Tower we moved on to the splendid Meiji Shrine which is surrounded by tranquil forest; I was fortunate enough to witness a Shinto wedding procession.

There are many beautiful gardens and the first we visited was in the Imperial Palace East; this is home to the Emperor and his family with a pond of enormous carp, and ornate Bonsai trees, the peace only shattered by the clash of sticks from the Kenso training school.

The Hama-Rikyu Garden boasts a picture perfect lake with jumping fish and a traditional tea house, framed by its neighbouring high rise buildings which are reflected in the green water. The area of the impressive Asakusa Temple, and the busy streets of Nakamise are very picturesque with some intriguing shops and stalls, and many people wearing rented Geisha outfits.

Today was my introduction to the much lauded Bullet train network on my journey to Kyoto. I had been looking forward to travelling on them and was not disappointed; the train left on time to the second and we raced through the countryside at 220 kms per hour.

Arriving into the enormous Kyoto station at lunchtime, we took a much slower local train for 30 minutes to Arashiyama, a small pretty town very popular with visitors from Kyoto.

We crossed the Togetsu Bridge and then strolled to the impressive Tenryu- ji Temple with gorgeous gardens and a tranquil lake. It gives on to the Sagano Bamboo Grove with a pathway leading through the tall green plants which give off an almost phosphorous green light. We continued onto the gorgeous Jojakkoji Temple complex and climbed the steps for an overview of Kyoto.

The next morning brought an early start and I watched the countryside rush by as my train sped towards Hiroshima, a place everyone must visit when they travel through Japan. On arrival we drove the hour to the ferry port for the short boat journey to spiritual Miyajima Island with the Itsukushima shrine and its orange torii gate seeming to float on the water.

The island is beautiful and very ornate with some interesting shops, and a population of winsome but very greedy Ninja deer, which are on a perpetual hunt for food. We were very lucky and witnessed a Shinto wedding ceremony, something that not everyone will see as they travel through Japan.

On returning to Hiroshima we began an afternoon tour of the city, It is sobering to witness the many sites in the Peace Memorial Park and to walk around the Memorial Museum. I shared the train back to Kyoto with many industrious businessmen and women still bent over their laptops.

The next morning I met my guide Yoko and we headed to the station where we encountered the very unusual situation of cancelled and delayed trains. I had been aware of very heavy rainfall during the night –one month’s worth had fallen- and this had led to flooding.

Despite this we were only delayed by 30 mins and travelled to Kashihara Jingu Mae station by local train where we were met and driven to Asuka. It is a beautiful village set among lush green rice terraces with spider lilies and a joy to walk around.

We visited the enigmatic Ishibutai Kofun Burial Mound thought to have been the burial place of Soga no Umako who was responsible for introducing Buddhism to Japan, although it is now empty.

We moved on to the fabulous Oka Dera Temple which houses one of the three largest statues of Buddha in Japan; it has exquisite grounds which are lovingly maintained by four priests and is a truly lovely place.

We visited the very friendly Visitors Centre in the village where I was coaxed into wearing a traditional costume to be photographed, before heading to the homestay where we were due to spend the night, where we met our host family.

I was given a short Japanese cookery lesson before we were served a marvellous meal with many small dishes, and an equally fabulous breakfast the following morning.

By now I was becoming quite adept at negotiating the trains and the next day we took several local trains, which are very different to the bullet trains,to our destination at Miwa. We walked up to the Omiwa Shrine, one of the oldest in Japan,which offers protection to Mount Miwa on which it stands.

It is associated with the production of Sake and as the God is said to enjoy the rice wine an offering of a small bottle and a raw egg are made by each visitor.

The surrounding forest contains many Cedar trees and is again serene and beautiful. Our next stop was at a Sake brewery where a sampling had been arranged; I learned that it should be served chilled, having only drunk it warm previously, and that the better blends are smooth and delicious.

We tottered back to the station to take another local train to Nara, where the deer park is home to a large number of free roaming deer- they are very pretty but can be aggressive and their antics to get food can be hilarious to watch.

Also in Nara is the Todaiji Temple, one of the most famous in Japan, which houses the largest bronze statue of Buddha Vairocana in the world. We walked through the narrow lanes of Naramachi, the former merchant district of Nara, which is like stepping back in time.

It has retained some lovely traditional buildings housing restaurants and shops as well as peoples’ homes and is very scenic. Another local train journey and I was back in Kyoto. My final full day in Japan was to be spent enjoying the cultural delights of Kyoto.

The first visit was to the very impressive Nijo-jo Castle; guarded by stone walls and a moat, it was the residence of Shogun Tokugawa Ieyasu and bears testimony to the power and status wielded by the shoguns at the time.

Entered through the Karamon gate the Ninomaru palace is a very grand complex and quite fabulous; the interiors are beautiful, with wooden floors and surrounds and adorned with gorgeously painted screens; the layout gives a picture of the day to day routine.Although there are many temples and shrines they are all different with their own features and highlights.

Our next treat was the Kinkakuji Zen Temple, a vision of gold leaf resting on the edge of a pond, and set in lovely surrounds. The Imperial Palace, located in the delightful Kyoto Imperial Park, was the former residence of the Imperial family until it was moved to Tokyo and although it is not generally possible to enter the buildings it is well worth a visit.

The Heian Jingu Shrine with its attractive buildings and giant steel torii gate, and the spectacular Sanjusangendo Temple with its 1001 wooden statues of Kannon the goddess of mercy, were equally captivating.

The final visit was to the Kiyomizudera Temple set on a hill overlooking Kyoto- with its wooden stage, Otawa waterfall, halls and pagodas it is a busy, photogenic and energising site to visit with many trees and arresting views.

Access is through the steep streets of the bustling Higashiyama area with an interesting and wide selection of shops. My last train ride was back to Tokyo racing through the countryside accompanied by a gorgeous setting sun.

Travel through Japan and you discover a glorious and absorbing country and as most nationalities do not require a visa for visits of up to 90 days, it is very accessible. Please contact us for details about our 11 day “Shades of Japan” group tour; we also offer private and tailor made tours.

GO TO BLOG
Discover Authentic Arabia on a Tour of Oman

Where Are The Best Places To Visit in Algeria?
Scroll to top