The Hornbill Festival of Nagaland

The Hornbill Festival of Nagaland

I was travelling to experience the Hornbill Festival, an annual inter-tribal festival that promotes the cultural heritage of Nagaland. I hoped to see the local tribes as they celebrated with traditional arts, dances, folk songs, and games.

We arrived in Kolkata mid-morning and sailed through the e visa process in minutes- we knew we were on a roll when our bags appeared as we approached the belt. It should be said that others arriving late evening/early hours experienced longer waits for their visas

Stepping out into the pleasant low 20s temperature we quickly spotted our guide, Ketan, and the 40 minute journey into town went smoothly. Our hotel was the “Lytton” which enjoys a central location under an umbrella of trees, and is comfortable without being glamorous.

After the overnight flight we were in need of a nap and met in reception early afternoon for what turned out to be a lovely walking tour of part of the city. I love Calcutta- it is a vision of Bedlam but has a real buzz; a mix of horn blaring traffic, impressive colonial buildings, lots of stalls and some amazing looking street food with crowds of people enjoying it.

We made our way through the chaos until we reached the monument to Queen Victoria- it is a lovely place in an attractive park and popular with local and overseas visitors- and took a circular route back to the hotel passing the main grassland area with horses grazing and kites being flown.

I needed to change some money and found it tedious and time consuming- I also changed too little as, with hindsight, it turned out to be next to impossible to change any in Nagaland and Assam. My advice would be to change at the airport on arrival or before travelling.

In the evening we headed through the neon lit streets, to a nearby restaurant full of local people, for a very nice meal and back to the hotel.

We left the hotel after breakfast and transferred back to the airport for the flight to Dimapur to reach Kohima. This state is the epitome of “off the beaten track” and the infrastructure is evolving, but struggling to deliver the standards many tourists would expect.

The roads are largely unsurfaced so journey times are difficult to predict and it was a four hour drive.

Another major consideration is the climate; the The Hornbill Festival of Nagaland always begins on 1st December and once the sun has gone down it is COLD, so warm clothes are essential. But waking up in the morning to the bluest of blue skies and warm sunshine, with hills visible in the distance, engenders that “good to be alive” feeling.

From entering the festival site the experience is wonderful. Kohima has a very significant place in the history of the Second World War, and is thought to have changed the course of the conflict in South East Asia.

The Naga people were very loyal to the Allied troops, and there is a very informative museum which gives a moving account of how the battle transpired, and the impact on the local people. There were also local exhibitions including a photography competition with some really interesting entries. 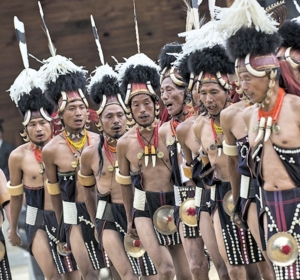 From here the road led up to the main area where each tribe has its own “morung”. These are the showcases of their costumes, decorations and culinary specialties, and there were pots bubbling away inside the huts with all manner of dishes.

Although Nagaland is a dry state there was locally produced Palm Wine and Palm Beer on offer which allegedly carries quite a kick. People milled about and there was a truly nice feel to the proceedings.

As the time of the opening ceremony approached, the tribes began to gather to rehearse their dancing and singing routines, and visitors were allowed to engage and take photos- several tribes had a wonderful choir and it was really enjoyable.

There was a fly by, courtesy of the Indian Airforce, and some rather uninspiring speeches from local politicians, but when the dancing and singing began it was amazing, and worth the journey to get there. The music went on into the night and a party atmosphere broke out. This is what I was expecting when told that I would be travelling to the Hornbill Festival of Nagaland!

Our group were staying on but I left after breakfast to head south to Jorhat and Majuli Island. We drove through very pretty rural scenery of golden fields and green tea plantations, although a lot of the road is unsurfaced.

Having arrived at Thengal Manor Hotel which is a beautiful old house set in lovely grounds, with very traditional service, I enjoyed my tea and biscuits and dinner that evening was very good. The walls were lined with evocative old sepia photos and the decoration throughout was lovely.

It was much cooler in the evening again but fan heaters can be provided in the rooms and even a hot water bottle at night.

We made an early start to reach the ferries before they became too busy; they are a number of shapes and sizes and although they take up to thirty motorbikes, most can only accommodate three or four cars and larger vehicles. It was a smooth journey down the Brahmaputra River to Majuli Island and I am convinced that I saw a pink river dolphin

The island is a rural retreat, with large areas of wetland, and a taste of Paradise for bird lovers- however, it has more to offer. We met our guide who turned out to be a Vaishnava monk, one of 350, who live in the Sattriya Nritya monastery, the largest in Assam, who showed us around with pride.

In the spirit of contrast we travelled to meet a maker of masks who exports them all across the world, and onto a tribal village. Some 200,000 people live on the island and they earn a living from growing black Dahl, rice and mustard.

There were imminent local elections and many people were in a noisy but good natured campaigning frenzy all across the island- I was to see long queues throughout the following day waiting to vote, and could not help considering the apathy in some Western democracies.

I woke today with a real sense of excitement as we were to move onto Kaziranga National Park, the other highlight of the tour, and a conservation success in terms of the One Horn Rhino.

The ferry back from Majuli was a particularly nice one and it was a pleasant journey but no dolphins this time. The anticipation grew as we entered the animal corridor of the park, and passed a couple of viewpoints with at least 6 rhino grazing with water buffalo and some deer.

On checking into the hotel I was advised that I would be told my departure time for the elephant safari the following morning, later in the evening. I received the glad tidings that I had a 4.30am start at 8pm so opted for an early night.

My wakeup call came at 4am and it was still dark, which later proved to be a bonus. We drove to the park gates and waited along with a growing number of people to pay our camera fees (200R and 1000R for video) and be given access.

This allowed the time to watch the slowly rising sun casting its pink light across the sky, and colouring the mist that swirled across the ground. The elephants were making themselves heard as we drove to the point to climb onto them, where there were some 10 of them. The babies were allowed to walk alongside their mothers, and behaved like young animals do, being a general nuisance but were incredibly cute.

The grass was long and soaked with dew which reflected the sun, and it was dreamlike swaying through it on the back of the elephant, as the sun continued to rise and the sky caught fire. We saw a number of rhino, some with babies, and wild boar came up to check us out, while shy deer grazed and gazed at us.

There were wild flowers dotted through the grass which further lit up a gorgeous scene. My elephant was a 9 year old female who allowed me to scratch her ears as a farewell, and I felt something of a pang as I returned to the jeep some 1.5 hours later.

Breakfast beckoned back at the hotel and was eaten against the background of a troupe of monkeys calling and drowning out all other sounds. I was savouring the thought of a nap, and had time before I had to be back at reception by 1 pm for my afternoon jeep safari.

This was in the western area of the park which is beautiful, opening onto the river at some points; I saw a number of rhino, water buffalo, beautiful eagles and storks, in particular a spectacular Black Necked Stork which had a turquoise head and neck with a black and white body and pink legs, standing about 3 feet tall. A sleek black otter also appeared at one point.

We drove through as the sun began to sink, and on the occasions we stopped to observe, were met with almost total silence. Kaziranga is a beautiful park and it was a magical day.

By comparison today allowed me a lie in before we left for the 5 hour drive to Shillong. It was a hill station in the time of the British and a sign on entering the city reads” the Scotland of the East”. It is pretty, busy but rather charming, and the Poinisuk Hotel has a lovely rooftop restaurant/ café with views across the rooftops. There are no sights as such but the Don Bosco Museum is highly recommended.

There is a daily flight from Shillong to Kolkata, but it leaves rather late in the day so I drove the following morning to Guwahati. some three hours, which has several, and ended up where I had begun my tour to the Hornbill Festival of Nagaland, at Kolkata Airport.

Linda Maguire travelled on the “Last Frontiers of India” tour to The Hornbill Festival of Nagaland and details can be seen on our website.

GO TO BLOG
Was I prepared to travel to Somaliland?

The Charm of the Comoros Islands
Scroll to top