The Sudan offers one of nature’s great contrasts: endless arid expanses of the greatest desert on earth, with infinite burnished dunes that barely tolerate life, pierced decisively by the greatest of world rivers, the Nile, bringer of life and abundance along its lush, irrigated length.

Along this artery of nature’s bounty, humans have not just endured, but flourished and nowhere more so than in Sudan. Here the Nubian Pharoahs ruled supreme and visitors can find more pyramids than in its more feted Egyptian neighbour.

Add to this a strongly independent culture of resolute traders, irrepressible Dervish tribesmen and idyllic Red Sea shores and it becomes clear why this country is  becoming a must-visit destination.

Our expansive group tour itineraries travel far and wide across the yawning and idiosyncratic beauty of Sudan’s deserts. Following the course of the Nile will lead you to sites of mind-boggling antiquity, from stone age scrawlings on lonely rocky outcrops to the Pharaonic era with Nubian culture’s uncelebrated dynasties which left vast swathes of pyramid capped necropolises rising majestically from the sands.

Retracing the steps of past cultures leads to Coptic Christianity’s beautiful churches, to evidence of the colonial period’s elegance in Khartoum and Port Sudan. Alongside millennia of human influence, nature throws up stunning splendour:  sun-soaked beaches and reefs on the Red Sea, languid crocodiles and chirruking pied kingfishers along the great river’s course and unforgettable star-smattered skies against the night desert.

This is a country which offers amazing adventures to those who boldly forge through its physical barriers.

Pharaohs bequeathed Sudan pyramids and archeological treasures that astonished me at every turn. All this is combined with the natural warmth of the local people, some charming lodging, and a helpful, expert guide. A winning trip.

Places to visit in Sudan and on our North Africa tours 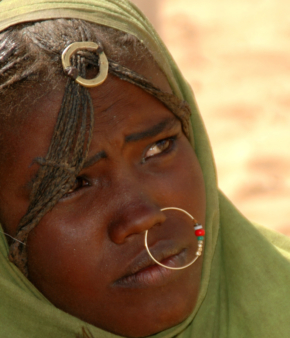 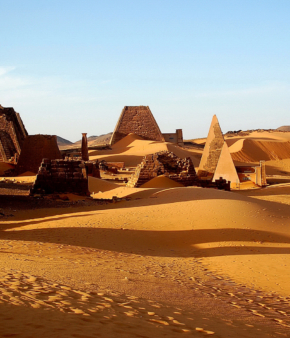 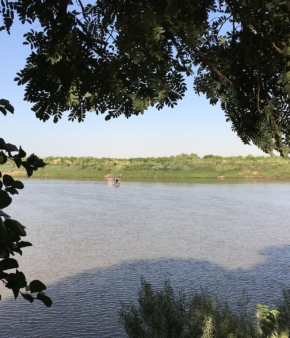 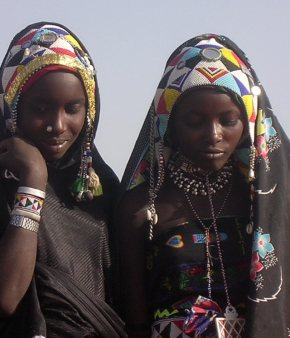 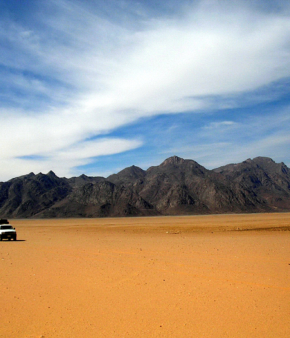 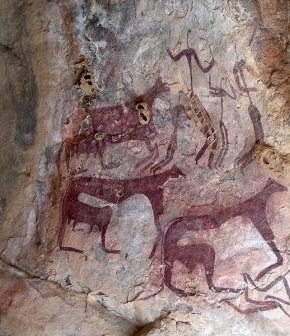 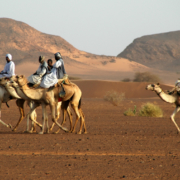 The third largest country in Africa, its whispering Saharan dunes offer a real sense of wilderness exploration. Forays into the arid expanses reward the visitor with breathless nights under skies smudged with constellations, and invigorating archaeological encounters with lost kingdoms that once ruled the civilised world. Navigating the great River Nile reveals the wealth and power it once bestowed on the Kushite and Nubian realms. Alongside the dynamism of Khartoum’s cultural celebrations and the languid beauty of the Red Sea coast, Sudan is a place that will work its timeless magic on you.

The name Sudan – literally ‘land of the black people’ – once widely used, has come to refer to the now partitioned country that straddles the upper Nile valley, centred on the confluence of the two great tributaries in the Blue and White Niles. Despite its surrounding aridity, the region has thrown up some of the world’s great civilisations and, unknown to most, astonishingly ruled over the Pharaonic kingdoms for the best part of a century. Along the great river, Neolithic cultures gave way to the Kingdom of Kush.

The capital, Kerma, was dominated by Egypt: by 1500 B.C. they had annexed Kush, bringing art, architecture, religion and language. The Pharoahs can still be admired in the dramatic red sandstone of 3 palaces and 13 temples beside the holy mountain of Jebel Barkal. By the 8th century, Kush’s independent power grew and in the 740s B.C. Upper Egypt and later the Nile delta were conquered. The period known as ‘The Kingdom of the Black Pharaohs’ with its capital at Napata saw a flowering in construction of magnificent ceremonial edifices: at Nuri the rows of 20 decaying  temples still impress the wanderer who comes upon this monument to Nubian royalty.

Perhaps Sudan’s most vivid site though is Meroe, Kushite capital from 590 B.C., where dark, steeply angled pyramids, truncated by millennia of weathering, stand elegantly atop ridges in the silky bleached sands. This final flourishing of the old civilisations built an empire that covered most of modern Sudan: tombs, stelae, palaces, irrigation systems alongside thriving cultural and mercantile exchange left wonderful sites for the intrepid to explore, such as Naqa’s rust-coloured temples. By the medieval period a new Nubian kingdom arose and by the 6th century A.D. Nubia embraced Christianity and, almost uniquely, repelled the Arab invaders to herald in a Golden Age of Coptic Christianity until the 1200s. Churches, adorned with splendid frescoes are still to be viewed in Dongala.

The kingdom waned and collapsed under successive waves of Bedouin and then Ottoman invasions, leading to the Funj state. British-Egyptian imperialism in the late 1800s was temporarily checked in Khartoum by the rise of the ‘Mahdi’ and the massacre of General Gordon’s forces, but Kitchener’s forces reasserted control and led to the British-Egyptian condominium of 1899 which endured until independence in 1956. A period of civil wars and coups d’etat ensued and peace finally was established via the partition treaty of 2011 when South Sudan formed a separate state. To today’s visitor, the country is a network of ancient sites and unheralded lost civilisations.

To walk these places is to immerse yourself into a world of stark enduring natural beauty and a sense of grand social transience.

Read more about tours in Sudan and our North Africa tours.