Uzbekistan and its neighbours have to be one of the most enigmatic parts of the world, tucked away between regional superpowers and fiercely contested over the years. Its position on the great Silk Road which once linked China to Europe has meant that it has been subject to a vast array of different influences, from Buddhist kingdoms to the armies of Alexander the Great, Genghis Khan and Tamerlane, all of which have left their mark. Linda Maguire recently joined Undiscovered Destinations Silk Road Group Tour. 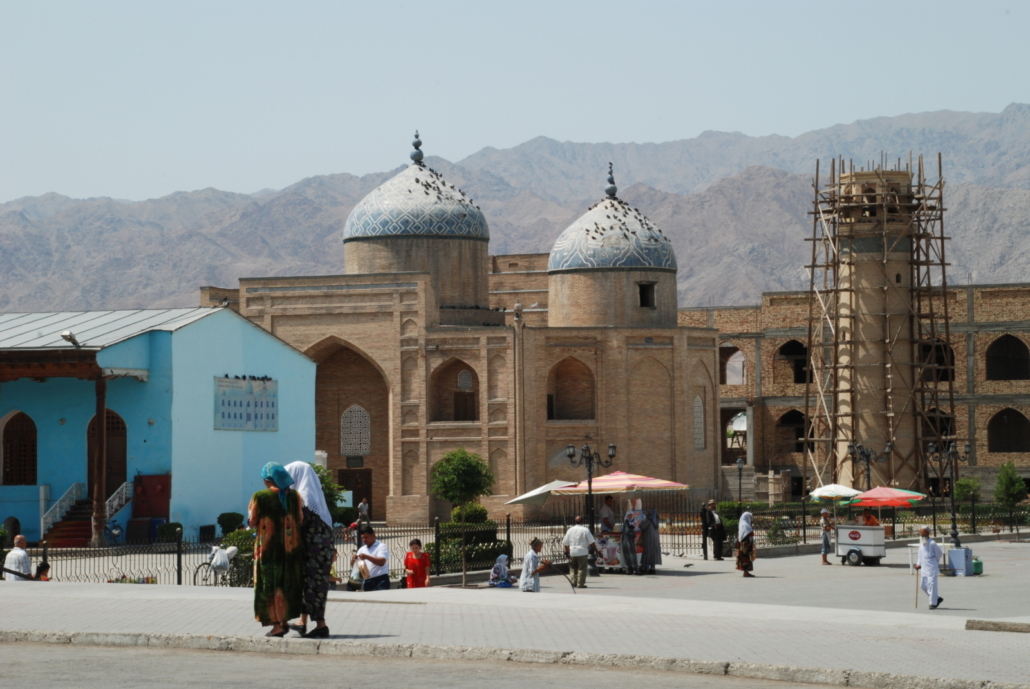 Having been drawn, over a number of years, by the romance of The Silk Road, it was with keen anticipation that I joined our Heart of the Silk Road group tour on 19th April.

The surprises began when, having settled into our hotel, we embarked on a city tour of Tashkent.

Generally considered as a mere arrival and departure point, we instead discovered the Museum of Applied Arts with its intricate tapestries and carpets, visited the Hazrat Imam Complex with the Mauji Muborak Library sheltering the world’s oldest Qu’ran, took a ride on the impressive metro system and finished with an assault of the senses at the blue domed Chorsu Bazaar.

The following day saw our arrival at the marvel that is Khiva, and this awe inspiring walled city began our introduction to a seemingly endless array of breath-taking monuments, decorated with tiles of achingly lovely colours and with domes of intricate design soaring high above, that grace the key cities along the route.

When looking at whether a Silk Road group tour fulfils the fantasy and romance of my imagination, this is what I had in mind.

To enter the “Museum City” through the city gates provides a genuine thrill, and with an atmosphere all of their own, the streets are a joy to explore.

Among the many highlights are the Islam Khoja Minaret whose stripes rise to an impressive 60 metres in height, the Pahlavan Mahmud Mausoleum and my personal favourite, the Friday Mosque-the gloom of the hall is relieved by two pools of daylight from above, revealing 215 engraved wooden pillars stretching across the room and creating a true impression of otherworldliness.

The “Holy City” of Bukhara felt very different, being more of a living city but was compact and easy to walk around, with a relaxed atmosphere. It is again hard to select highlights but aside from The Ark, which is impossible to ignore, I would opt for the Poi Kalyon Square with its mosque and minaret and my favourite, the simple but perfectly proportioned Ismail Samani Mausoleum.

From the first approach to the city Samarkand is beautiful, surrounded as it is by green hills. A busy city in its own right it has a wealth of monuments, each more arresting than the last, and capped by the Observatory of Ulug Beg on the outskirts of the city. The Shah-i-Zinda was the star attraction for me, a beautiful street of splendid tombs stretching up the hill to the graveyard at the top.

It is easy to lose yourself in wonder at the incredible mosques and medressas, elaborately decorated in blue tiles and traditional Islamic art.

The real surprise of all the cities on this Silk Road group tour was Ashgabat. It has hugely impressive monuments, parks, fountains, long wide avenues and the most luxurious bus shelters I have ever seen but no people. Away from the downtown area there was hardly anyone to be seen and the group agreed it had a post-apocalyptic feel- nevertheless we would have liked more time to try to see a bit below the surface.

Away from these cities are the important sites of Konye- Urgench and Merv (where it rained on the day of our visit), which provide important pieces to the jigsaw of the Silk Road from their desert locations, and which are very evocative.

But aside from the splendours and history of the cities it was fun! The people are friendly and curious and we were afforded a taste of VIP treatment with constant requests for photos, especially one member of the group who sported a distinguished grey beard.

I travelled with a great group of people and the high expectations I took to the trip were more than exceeded.

GO TO BLOG
On a tour to Haiti, there are many positives