Portugal clung onto this colony until as late as 1975 and after a short while in the twin archipelagos it’s hard not to see why: volcanic nuclei clad in mist forest give way to upland primary rainforest that harbours wonderful wildlife, much of it endemic, before the lower slopes emerge, spread with historic plantations of coffee, cocoa and succulent tropical fruits, all surrounded by paradise beaches and balmy azure waters.

And yet tourism is very much in its infancy here.

The locals, especially their enchanting children, still view outsiders as a wonderful curiosity and will relish the opportunity to show you the cultural heart and soul of their wonderful islands.

Our group tour and tailor-made trips head out across the southern Bay of Guinea to experience the delights of these tropical jewels, as well as island hopping to the tiny isle of Rolas, an idyllic volcanic cone that sits astride the equator.

You will immerse yourself into the plantation culture of the archipelago, seeing up-close the complex production and savouring the delights of the finished coffee and cocoa products, meeting locals who have practised the arts of growing, roasting and blending for generations.

Your explorations of the islands will lead you through lush tropical forests, abundant with flamboyant birdlife, and along shores and through crystal clear waters to imbibe the languid splendour of palm-fringed white sands and thriving reefs.

Most of all, the easy-going people of the islands, their artists, community projects and delectable cuisine, will embrace you in their inimitable warmth.

An African paradise! São Tomé & Príncipe was exactly as I hoped it would be. Laid back, lush and plenty of interesting places to explore. 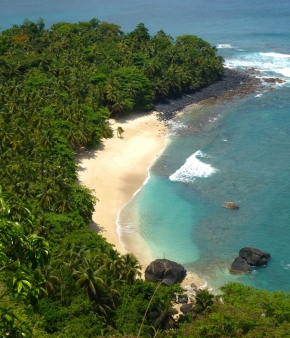 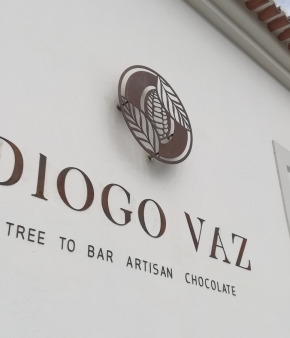 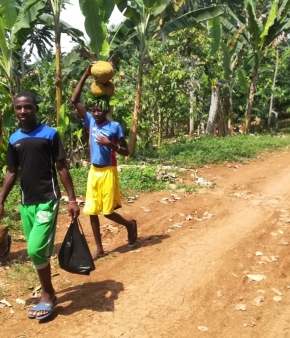 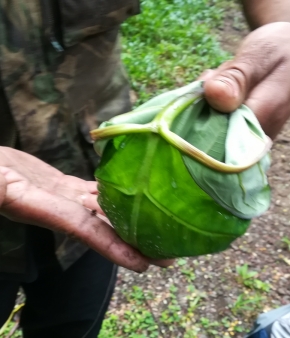 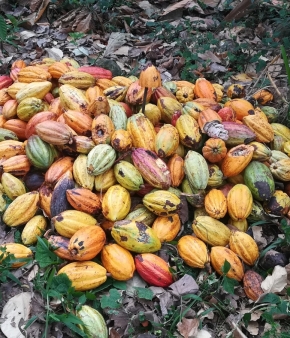 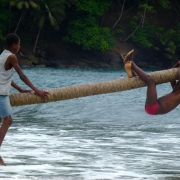 The second smallest nation in Africa remains largely unexplored, from its dramatic colonial past to its fascinating hidden corners where local community projects and idiosyncratic artistic endeavours lie waiting to be discovered. Indeed, naturalist expeditions to this beautiful UNESCO biosphere reserve constantly unearth new species in a land where humans only arrived a mere 450 years ago. From snorkelling in its rich waters to tasting arguably the world’s finest chocolate after wandering amidst the lush terraced plantations to the symphonic chorus of endemic birds, this feels like a world of true escapes.

Set over 225km off the Gabon coast, São Tomé & Príncipe are comprised of two archipelagos of peerless beauty. The population of 211,000 occupies an area of around 1,000 km² and much of this remains relatively untouched.

Rising dramatically from the Atlantic, these extinct volcanic cones, an extension of the Cameroon volcanic line, have subsided under the forces of millions of years of weathering and their fertile soils have given scope to a cornucopia of species. 90% of the islands remain forested, and at the centre montane and cloud forests thrive, surrounded by upland primary rainforest.

The result is a country which boasts the highest density of endemism on the planet: few mammals exist here – the São Tomé shrews and bats being notable exceptions – but 28 endemic bird species draw ornithologists to delve into the lush greenery and bountiful plantations in search of such as São Tomé’s ibis, the smallest example in the world, and the Giant sunbird, conversely earth’s largest specimen.

As the slopes of the mountains recede, vestiges of the igneous origins of the islands remain, most notably in the naked rocky digits of volcanic plugs like Pico Cão Grande and in the crater at the heart of Rolas Island. The bountiful ground, tropical climate and virgin landscape were the perfect combination for first sugar cane and then coffee and cocoa production and so, after the arrival of the first humans on board Escobar and de Santarém’s ship in 1470, the Portuguese were quick to establish plantations – on São Tomé by 1485 and on Príncipe by 1500. African labour was brought in slaves from Angola and other areas, many of whom escaped and set up ‘maroon’-style free colonies in the south of São Tomé and, known as ‘Angolares’, still dominate the fishing villages there.

Phases of freeing of slaves and ethnic intermarriages between Africans and Europeans set the tone for the current make-up of the islanders, dominated by the ‘Mesticos’ or mixed-race peoples. The third, and proudly adhered to group are the ‘Forros’ – slaves freed as early as 1515 by the Portuguese king, a trend which was to quickly founder when the Dutch conquered the region, transferred sugar production to Brazil and established the hugely successful coffee and cocoa planting, the first of its kind in the continent, in 1787.

For several years the islands led the world in cocoa production, all built on the back of fresh waves of slave trading, bolstered by convicts who could not refuse the offer to live in the then malarial climate which had deterred free Europeans from taking up the offer. As you tread in the footsteps of the labourers on the huge and complex plantations it is easy to see how self-sufficient these became, with narrow-gauge railways often connecting them.

Today, cocoa in particular remains a staple of a weak export economy, but planters like the Italian Corallo have begun to focus on organic and fair-trade markets in an effort to carve out a new niche of extremely high quality products. The seemingly endless number of Roça strewn around the landscape male for intriguing visits where coffee and cocoa, often core spices in the delicious cuisine of the islands, can be tasted in all its glory.

Antique strains and processes speak of grimmer times when slavery and then pseudo-slavery with indentured workers unable to escape was the norm. Indeed, until the 1975 declaration of independence, workers here were treated with little humanity, meaning that land reform and establishment of co-operatives was welcomed with open arms. Much of known São Tomé & Príncipe’s future seems invested in speculative oil exploration, and yet the more obvious resource of tourism is yet to truly catch on.

This is somewhat baffling, since the combination of flora, fauna and food is a compelling draw. The landowners are certainly open to visitors and relish the opportunity to proudly display their production methods and allow you to sample their wares from chocolate to coconuts, whilst small-scale village projects such as the Neves school program and Praia Burra women’s community jewel workshop are delighted to engage those who find their way to their sequestered settings.

Add into the mix the pristine waters that draw such as hawksbill turtles, sand sharks and even the inimitable mudskipper, the world’s only fish to ‘walk’ on fins onto dry land, and the sensitive blend of luxurious hotels and Eco lodges that nestle up against a wildlife lover’s heaven, and you can begin to believe that you may have arrived here in the nick of time!

Read more about São Tomé & Príncipe and our other African tours.