Cast adrift in the Atlantic, some 250km off the coast of Gabon, the island nation of Sao Tome & Principe is Africa’s second smallest country, and the world’s smallest Portuguese-speaking state. Uninhabited till the 15th century, fertile volcanic soils and an equatorial climate lent themselves to sugar, coffee and cocoa cultivation.

A series of bloody slave revolts against brutal Portuguese authorities characterised later history. Exploitation of African labour existed even until the mid-20th century. However, independence came in 1975 and since then Sao Tome & Principe has been one of Africa’s most stable states and has led the continent in political reforms. UNESCO declared the island of Principe, and its surrounding islets a World Biosphere Reserve in 2012 for its important ecosystem. The country now attracts the attention of a steady trickle of tourists, those interested in hiking, marine wildlife, great cuisine and fantastic coffee and chocolate.

Welcome to São Tomé and Príncipe, a remote archipelago off the coast of central Africa that few people have even heard of, let alone been to.

On our tour we explore the colonial heritage of the islands by staying in restored plantation houses, walk through unspoiled forests in the interior and relax on pristine beaches. Explore a truly undiscovered destination.

Arrive in São Tomé and transfer to hotel accommodation, with the rest of the evening free to relax. Overnight Emoyeni Gardens Hotel. (D)

Please Note: A compulsory hotel tax of EUR€3 per person per night is levied by all hotels and must be paid in person upon check out. 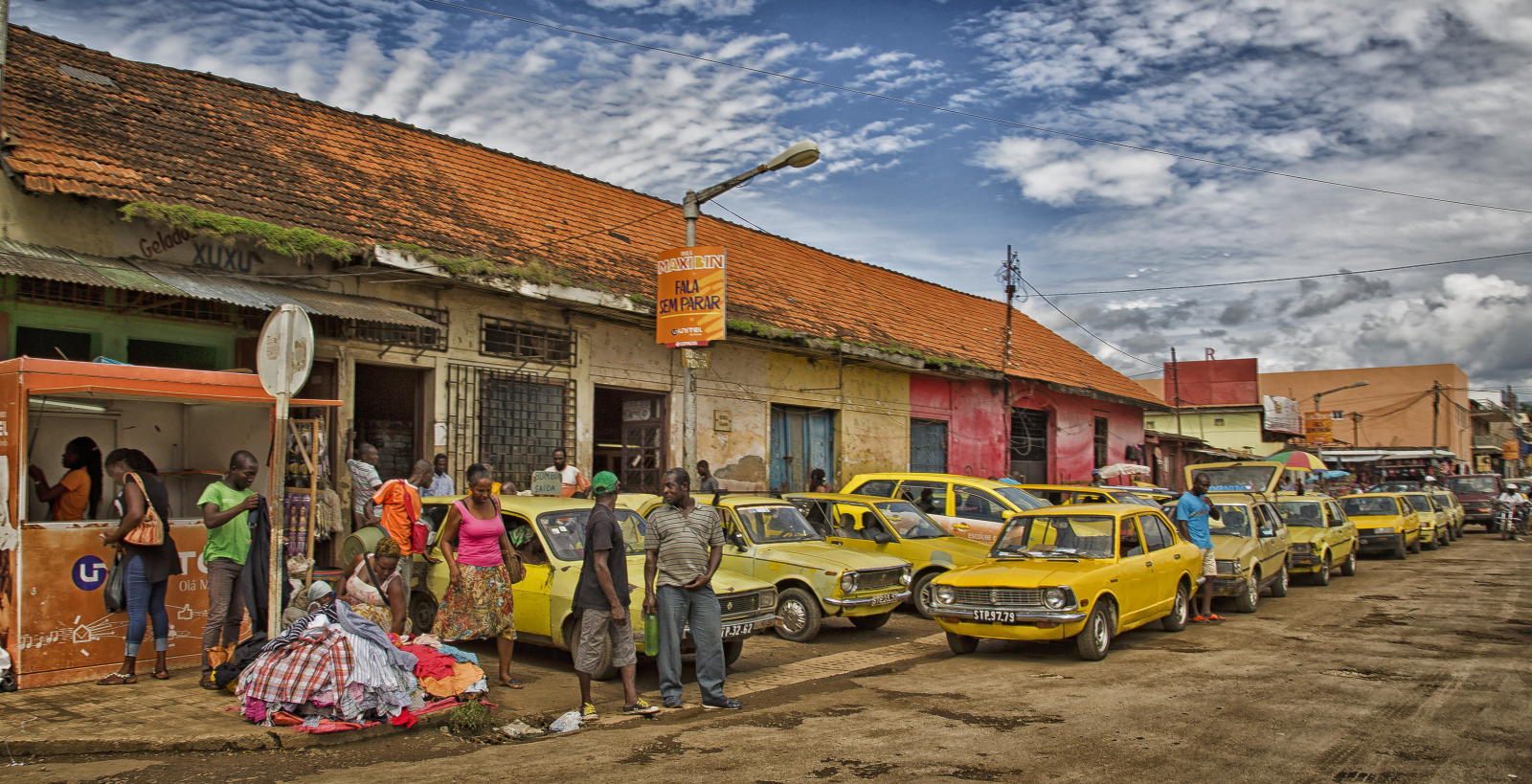 Today after a welcome briefing we explore São Tomé town on foot. We visit the Post Office and the Tourist Office to pick up postcards and beautiful stamps, and a map. We also visit Independence Square, the National Museum and the bustling market. Lunch is a light bite at the surprisingly urban C.A.C.A.U art & museum space. This afternoon we visit the Corallo Chocolate Factory for a chocolate presentation and tasting. Overnight Emoyeni Gardens Hotel (BLD) 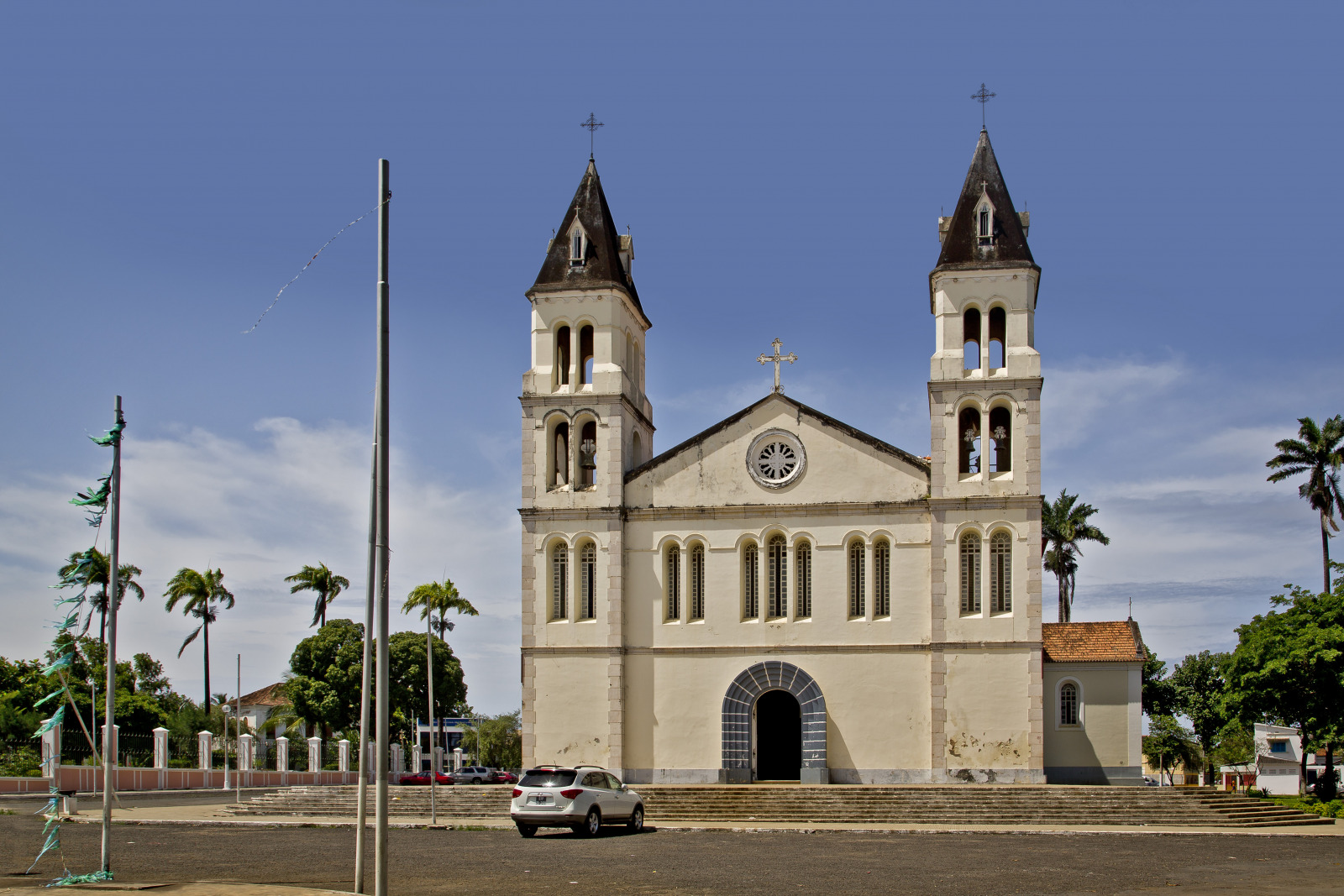 This morning we visit the Valúdo coconut factory near Tridade, to try the products and meet with the owner. We continue up to Nova Moka where we meet Luis Mário, the executive director of a coffee cooperative, who will guide us through his yard/orchard and along coffee plantation paths on to Monte Café. We then walk a brief way to Roça Saudade for a gourmet lunch in a rainforest setting before returning to our hotel.  This evening, around 17:00, transfer to a sand cards workshop with local artist and musician Guilherme Carvalho. The rest of the evening is at leisure. The tour leader can point out local restaurants for you to explore. Overnight Emoyeni Gardens Hotel (BL) 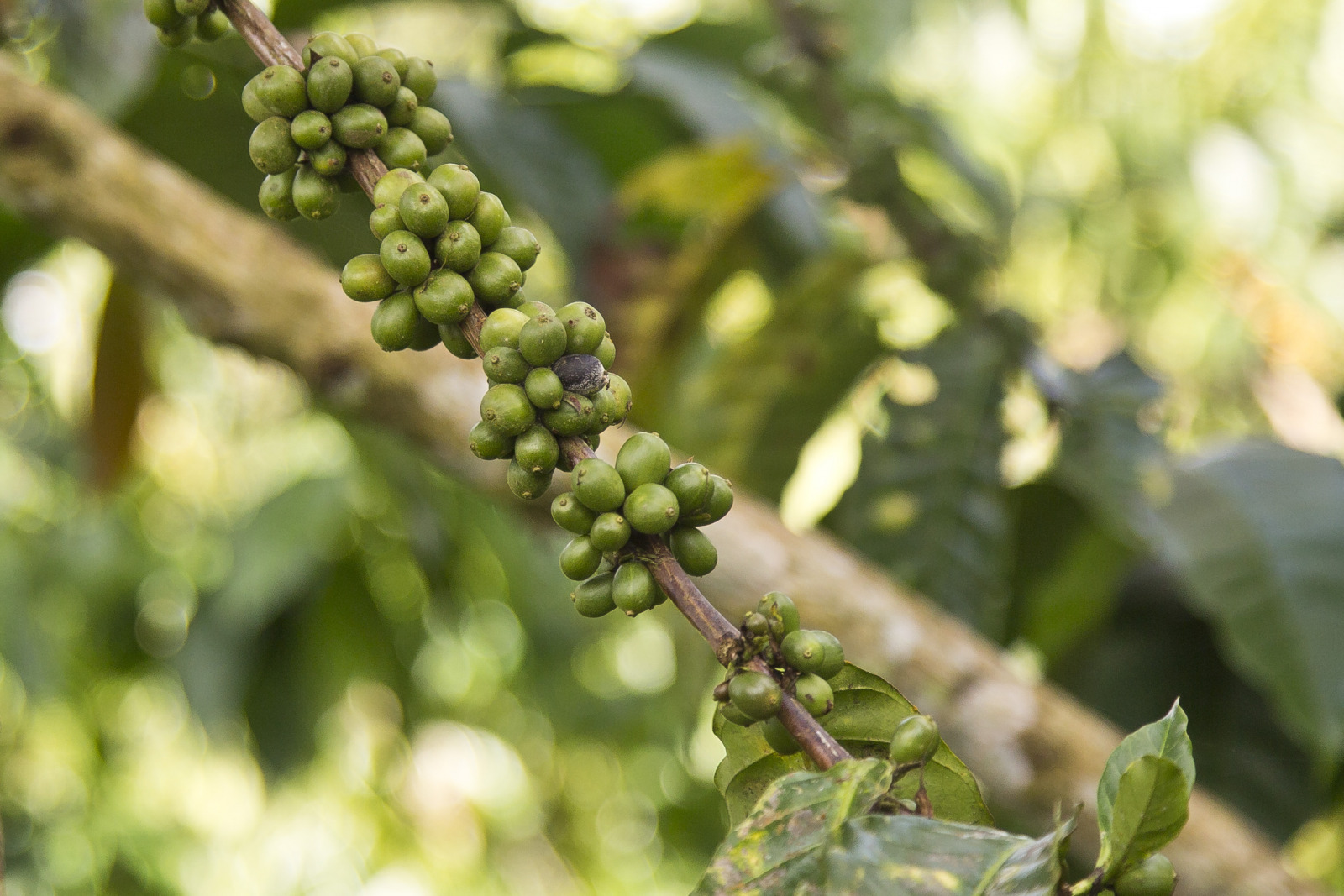 After an early breakfast we transfer to the airport for our short flight to Príncipe. On arrival we explore Santo António, the capital of Príncipe, and meet Henry Cronje, HBD’s recycling manager, a Zimbabwe-born, long-term resident of the island. After lunch we drive to Roça Sundy for a 3-night stay. Later this afternoon before dinner we take a tour of Roça Sundy, where a hundred years ago, Einstein’s theory of gravity was proven by a British scientist, and a new chocolate factory has sprung up. Overnight Roça Sundy (BLD)

After a leisurely breakfast we explore the island by jeep: visit Roça Paciência to explore the orchard where all fresh produce for the HBD hotels comes from – if possible encounter with the head of product development; tasting, opportunity for shopping for exclusive treats. On to visit another restored plantation Belomonte with a fabulous new museum on STP’s wildlife and opportunity for swimming on famous Banana Beach, a 20-min downhill walk beach picnic. Free time on beach with opportunity for kayaking (Belomonte) or walking along the nearby beaches to the Praia Burra community, the site of a new women-run jewellery project. Overnight Roça Sunday (BLD)

Before breakfast this morning there is an option for birdwatching on the plantation. After breakfast transfer to Bom Bom resort to enjoy its facilities, with many options for relaxing or exploring. For example, take a 3-hour circular hike to Ribeira Izé, the former capital of Príncipe with a connection to the famous slave trader Maria Correia, kayak around Bom Bom Islet, snorkelling, and others. Return to Roça Sundy for dinner and overnight. (BD)

Transfer to the airport for the short flight back to São Tomé and transfer to São João along the east coast, with the opportunity to stop by the post office, pharmacy/supermarket en route. We have a brief stop at Voice of America and visit the dramatic Boca do Inferno (Hells Mouth) rock formation, reminiscent of the Giant’s Causeway. There is also the chance for a dip in the ocean at mystical 7 Ondas Beach. Continue on to São João where you can take a walk on the plantation before dinner. Overnight Roça São João (BLD) 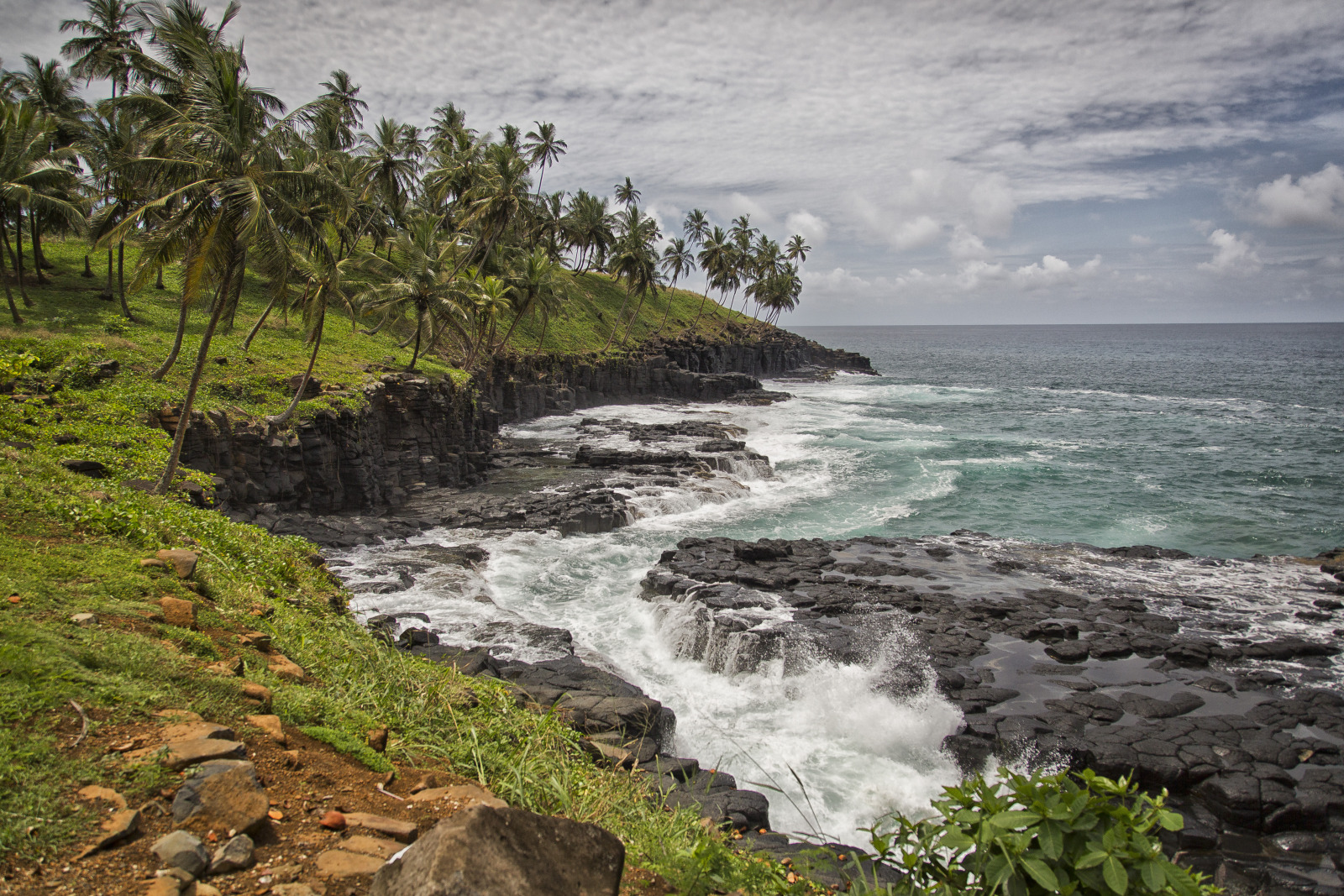 After a relaxing breakfast we drive to the southern tip of São Tomé Island and transfer by boat from Ponta Baleia to Rolas Island, straddling the equator. We take a 1-hour hike via the real equator to the equator mark viewpoint and have a beach lunch at beautiful Praia Café with the opportunity for a dip. Those who don’t want to hike can join us at the beach (approx. 20m walk on flat ground) This afternoon we take a boat trip up the west coast (approx. 2.5 hours) to Neves where we transfer to nearby Mucumbli Lodge for a 2-night stay (BLD) 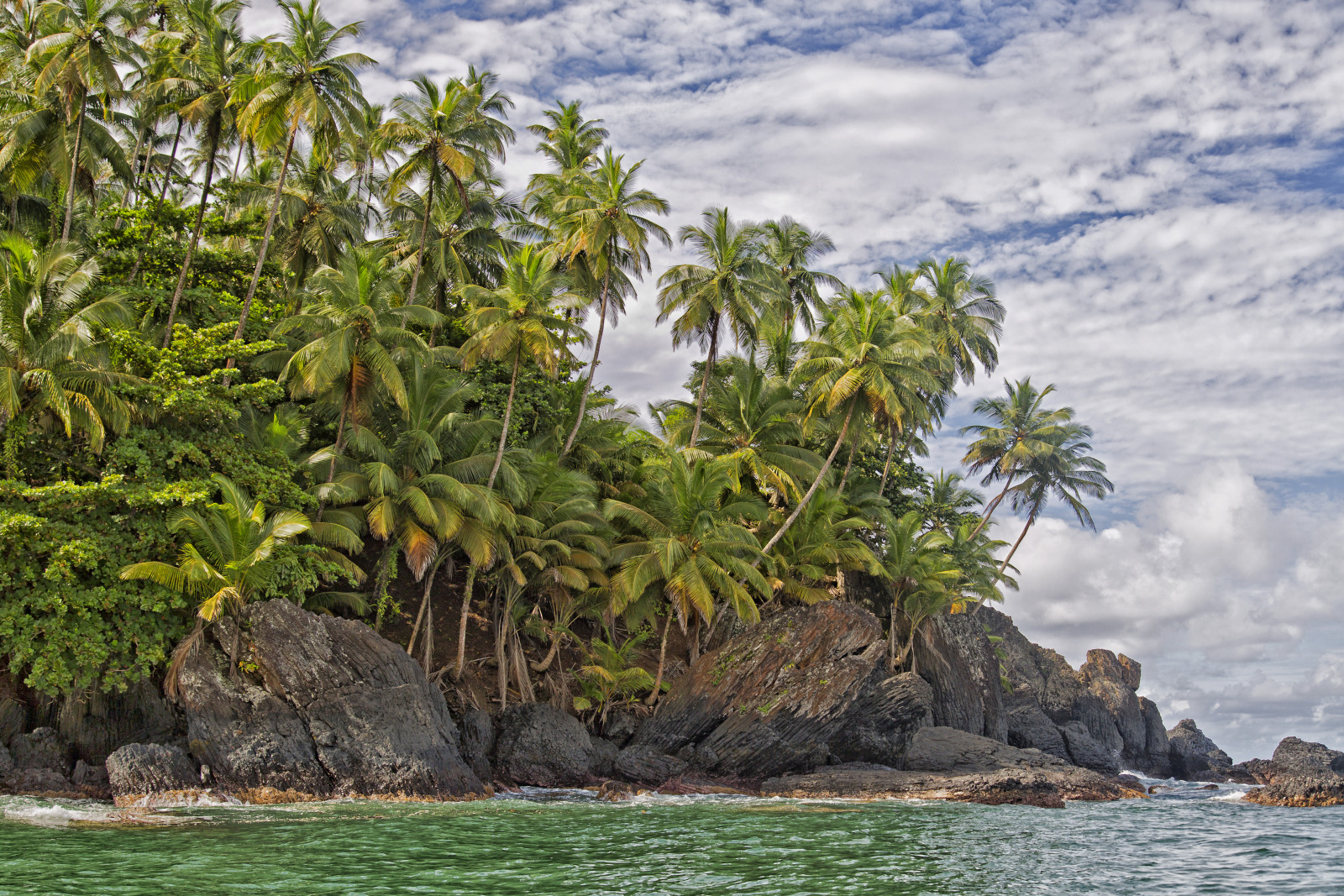 This morning we visit Diogo Vaz cocoa plantation. This can be done by cycling (approx. 8km) or by a short transfer by car. We take a couple of hours exploring the plantation on easy trails before a simple lunch at the plantation’s cabin restaurant. After lunch we visit the fermentation/drying complex, located on the other side of the road before returning to Mucumbli for a relaxing afternoon. You may wish to visit the beach or take a botanical walk around the grounds. Those who chose to cycle can continue along the scenic coast road towards Sta Catarina, with the opportunity for visiting a new women’s embroidery project. Overnight Mucumbli Lodge (BL) 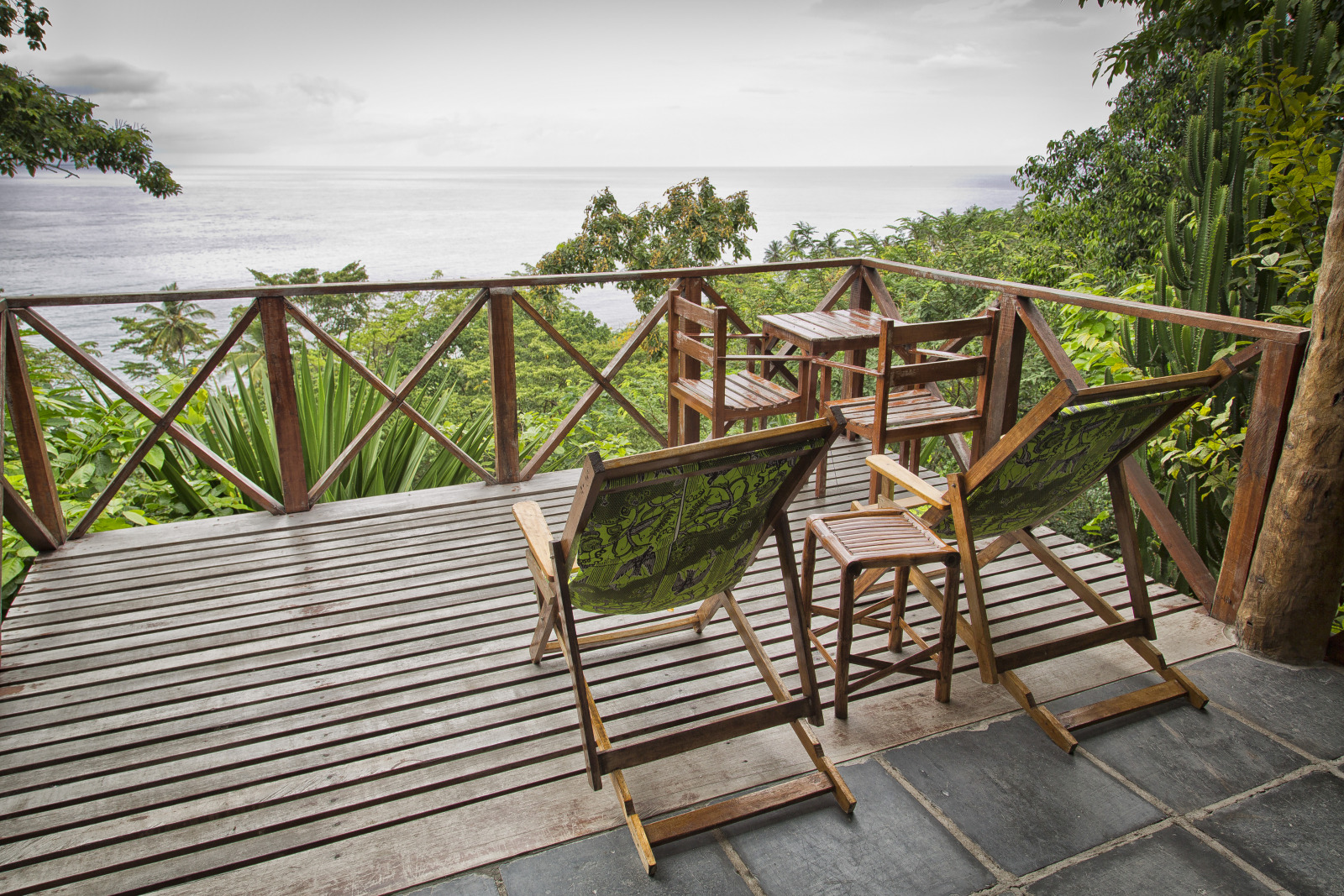 Spend the morning at leisure. You may wish to visit an interesting social/school project in Neves (30min walk from Mucumbli, your tour leader can accompany you). This afternoon, around 14:00hrs, we leave for the capital (approx. 1-hour drive) with a stop for shopping in town en route, and visit the Diogo Vaz Chocolateria for a chocolate tasting and patisserie stop before being transferred to the airport for your departure flight (B) 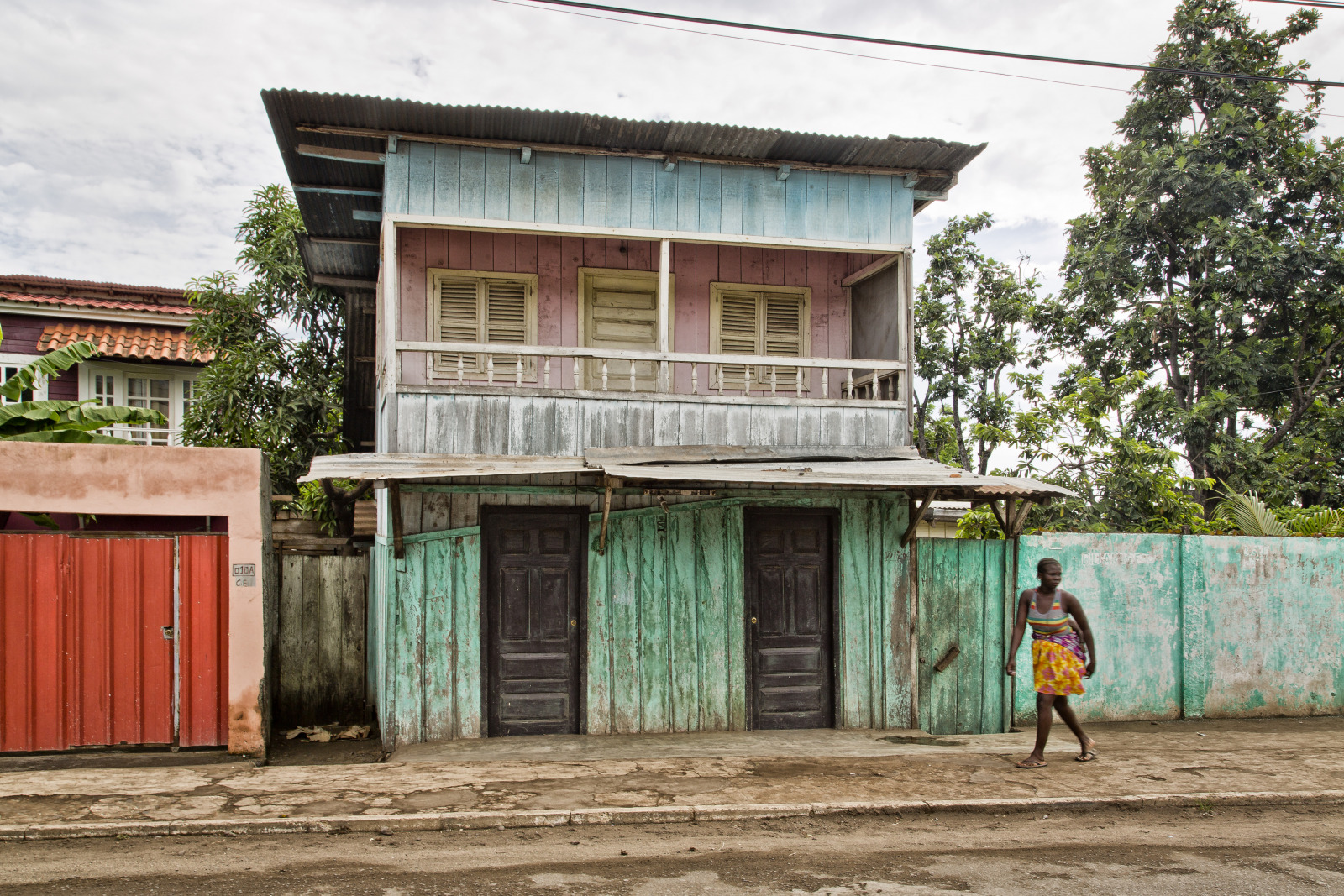 Return flights from London to São Tomé and Príncipe start at £900. Contact us for a quotation.

We strongly advise a night in Lisbon before the tour due to the too tight transfer window at an ever more overstretched Lisbon Airport, missed connections or missing luggage are a real risk, and a missed connection would result in losing the first two days of your trip. We can quote for accommodation in Lisbon.

Kindly note that we can also tailor a similar or totally different itinerary to meet your requirements. Please get in touch with us so we can tailor your perfect Sao Tome tour. 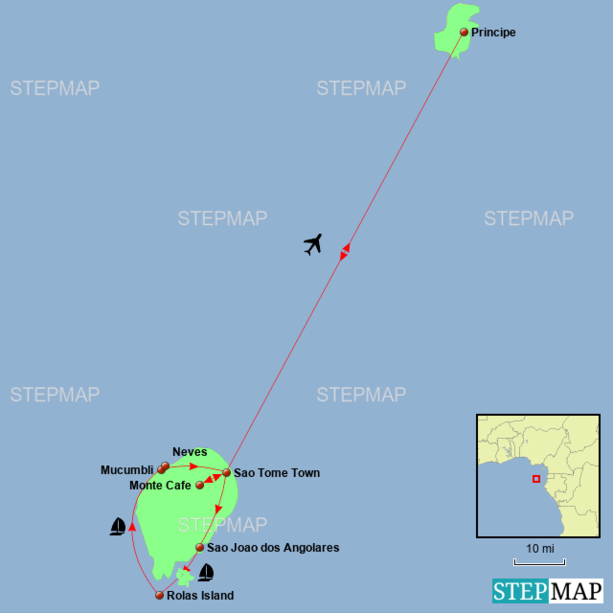 An excellent trip. We really enjoyed it. People very friendly and place felt exotic but safe. Loved the food at Roca San Juan.