The driest country in sub-Saharan Africa, sparsely populated and dominated by two of Africa’s great deserts, it seems Namibia could have little to draw visitors to its barren landscape. Yet this is a nation which has embraced the beauty of its other-worldly wildernesses, its incredible biodiversity and its curious history.

From fossilised dunes of the dramatic Kalahari and the ferocious allure of the Skeleton Coast to the tumbling ribbed precipices of the world’s second largest canyon and the vast prisms of terracotta sand in the Namib Desert, expect to spend your days here scrabbling for your camera amidst a plethora of magnificent wildlife, jaw-dropping panoramas and natural curiosities.

Our group tour and tailor-made holidays in Namibia plunge into the savage splendour of Namibia’s wonderful landscapes and seek out its many enthralling sites.

You will cross the great expanses of the Kalahari whose vivid red dunes hide idiosyncratically damp zones that nurture an incredible array of endemic species; wander abandoned diamond towns, smothered in the shifting sands of the coastal Namib; the decaying grandeur of colonial towns will intrigue you, nestling against the tumbling expanse of the Atlantic, where dolphins, seals, penguins abound and albatrosses skim the waters behind homebound fishing boats.

Finally the drama of game drives at Etosha’s National Park will reveal Namibia’s success story in nurturing the great herds back into viability – watching huge numbers of zebra and families of elephants vying for a place with lions at waterholes makes for a fitting and heart-warming climax to any trip.

The Guide known to us as PJ was excellent – extremely knowledgeable on every aspect of Namibian history, plants, animals etc. Further, he had 20/20 vision and was able to spot and identify animals and birds at a great distance which we would have missed so that we saw more animals at a close range than some other tourists that I met.

Places to visit in Namibia and on our African tours 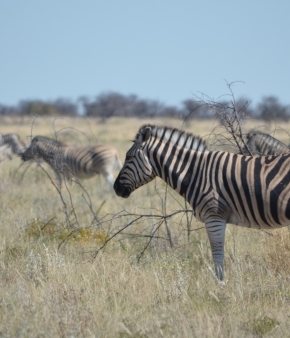 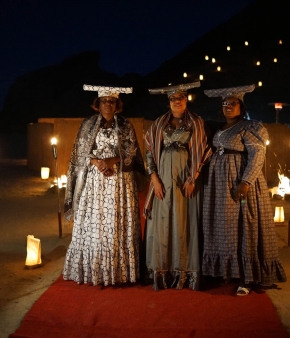 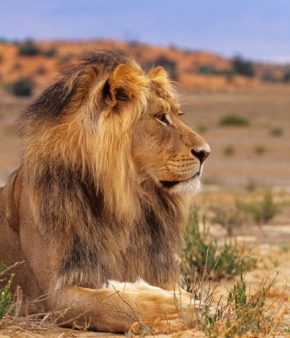 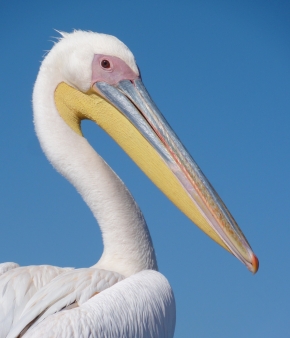 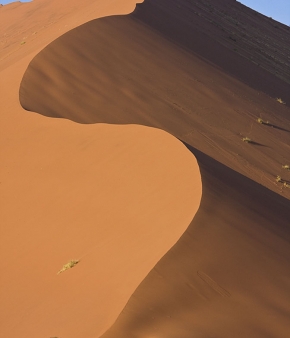 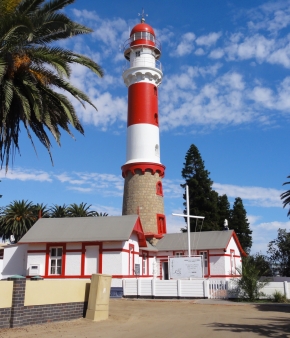 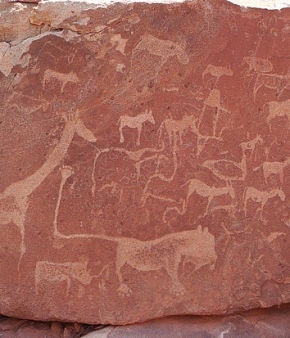 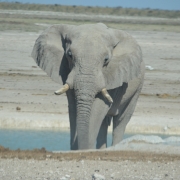 Few places on earth lend such an intense sense of escape and space. Just 2.6 million people inhabit this wide nation and therein lies its attraction: voyagers into the massive emptiness of the Kalahari, Namib and Skeleton coast will be awed by the softness of peaceful silica grains and the immensity of nature in casting such fabulous features in dune, rock and valley. Whether you stand atop the world’s highest dunes, gaze into the abyss of colossal canyons or marvel, breathless, at the elephant’s noble progress, the magic of Namibia is inexorable.

Situated at the south-west extreme of the continent, Namibia’s name encapsulates its character – in Bantu ‘Nama’ is a ‘vast place’ and its isolation and lack of population are directly linked to its geography: for millennia, only small nomadic tribes – the San, Nama and Daman for example – eked out an existence in amidst its arid lands.

The ancestors of the remnants of these peoples were astonishingly prolific in cave art and Twyfelfontein contains literally thousands of examples. By the 14th century A.D. the Bantu expansion from central Africa had made its impact on the region and today’s dominant peoples are Bantu ethnicities, such as the Ovambo who make up nearly 50% of the population. Lack of precipitation has always influenced settlement and so  a good deal of the modern population inhabits the highland central plateau stretching up into the Otavi Mountains where the main water features occur in the abundance of Etosha National Park.

Around it a broad saline desert spreads out and only dampens in the occasional rainfall that comes with the altitude. These highlands also encompass Namibia’s  natural features – the canyons. Carved out by long since vanished water torrents, the best of these is Fish Canyon, second only in volume to Arizona’s Grand Canyon and, like lesser examples in Sesriem and Kuiseb, haven to many flora and fauna curiosities. In a land which contains over 2,500 plant endemics in the Succulent Karoo southern semi-arid regions alone, the diversity of ecoregions is surprising. The lack of rainfall coastally is owing to the offshore cold Benguela Current which cloaks the shores in mists and deterred early European explorers. In 1485 Diogo Cão from Portugal briefly landed, but no claims were made for what appeared a desiccated wasteland.

Thus is wasn’t until the 17th and 18th centuries that traders began to populate the inlets and beaches, reaping a rich harvest from the seas: at the northern extremes of the western seaboard lies the Skeleton Coast, prolific in seals and whales which feast in the cool waters. The name emanates from both the scattering of the bones of their harvest and from the sundry hulks of ships which succumbed to the perilous coastline, its dry climate earning it the bushmen’s damning epithet ‘Land God Made In Anger’. It was not until the 18th century that the Oorlam people migrated north from The Cape in numbers.

By 1880 this had led to severe clashes with the northern peoples, so the German Empire, flexing its colonial muscles intervened to prevent bloodshed but also to place themselves strategically as a buffer to expansionist British instincts from the south. The region became officially German South-West Africa in 1884 and was now a central corridor for trade between Angola and The Transvaal. Almost simultaneously, the British annexed Walvis Bay as a key port to serve South Africa’s needs, a pace which was only returned to Namibia in 1994 by Nelson Mandela’s government. By most accounts, the colony was harshly run, once uprising quelled by mass extinction – 10,000 Nama executed in camps, roughly 50% of their total number.

German finances were bolstered by the diamond rush which began at the start of the 20th century. The ‘Forbidden Zone’ of the Aus Mountains was characterised by rough alluvial gems simply scattered on the soil and towns like the now deserted Kolmanskop sprung up and flourished. Today it is populated only by wild horses and encroaching sands. Whilst German over-lordship brought racial segregation and forced confinement of tribes to designated ‘ethnic homelands’, when South Africa was given control of the region after World War I little improved for the locals. By the 1940s, full scale apartheid was established and nationalist uprisings were again crushed. The UN declared ‘Namibia’ as an official nation in defiance of the South African refusals to allow independence so that Cuban, Angolan and Russian military might was lent to the freedom fighters in a bizarre playing out of Cold War rivalries against a US backed South Africa.

Only in 1990 was this finally accepted by all parties and the subsequent multi-ethnic election saw a 97% turnout to elect a first president. Namibia has fared well since: its democracy and racial tolerance have held firm and mineral reserves have brought steady economic growth, though not for all levels of society, 50% of who still subsistence farm. Notably, the government have ploughed resources in the last two decades into environmentalism and the national constitution has a sustainability article built-in. 14% of the nation is protected and massive efforts have been put into the recovery of poached-out mammal species: in Etosha the 50 elephants have grown to 500 and the zebra, once reduced to a mere 500, now stand at 14,000 there. Responsibility is gradually being transferred to local people to organise, sustain and reap the financial rewards of tourism, based on Zimbabwe’s CAMPFIRE model and visitors can now confidently expect to watch lions, leopards, black rhino, cheetahs and a huge range of smaller mammals and avifauna.

The future for the landscape, wildlife and rural population looks very bright indeed and visitors are beginning to truly feel the benefits in this beautiful and awe-inspiring land.

Read more about Namibia and our other African tours.