In this enigmatic land where timeless souks stand in the shadow of glorious monuments to modern Morocco’s religious and engineering zeal, expect to be overwhelmed by sheer variety. Whilst watching the changing faces of Morocco’s landscape from your Pullman is fascinating, pausing at Casablanca’s cultural epicentres provides unforgettable experiences:  the astoundingly huge, resplendent Hassan II Mosque and the contrasting hubbub of the Habous Quarter against the labyrinthine historic calm of the old city. Perhaps even more so, Marrakesh meets all your expectations, outlandish and yet hospitable, ornately antique and yet pulsatingly alive.

Ride the modern-day Marrakech Express, Africa’s first high-speed train, as part of our overland tour, travelling all the way by rail from London to Morocco. Our range of Epic Rail Journeys offers independently minded travellers the chance to experience some extraordinary adventures to destinations beyond Europe.

Once in North Africa ride the modern-day Marrakech Express, a high-speed train south to Casablanca.  Explore the city’s handsome Moorish buildings, which meld French-colonial design and traditional Moroccan style. Finally continue by train towards the Atlas Mountains and Marrakech. Its heady sights and sounds continue to dazzle, frazzle and enchant. And for travellers who have made it all this way by train it promises to be even more special.

From Marrakech return home, or contact our experts to discuss extending your tour in Morocco. Or for the ultimate overland experience continue your journey south on a pioneering expedition, crossing the Sahara through Mauritania, and onto Senegal and little visited Guinea Bissau.

Thank you for arranging our trip to Morocco. I had spent a long time trying to find a company who could arrange the trip for us. Everything went smoothly, and we loved the new high speed train from Tangiers to Casablanca. We didn’t realise that it’s the same as the French TGV. We look forward to trying one of your other rail trips soon.

Places to visit in Morocco 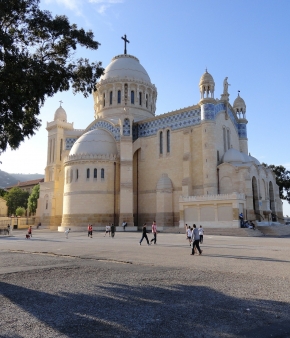 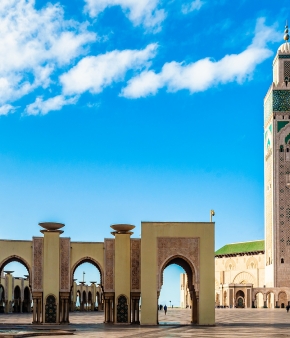 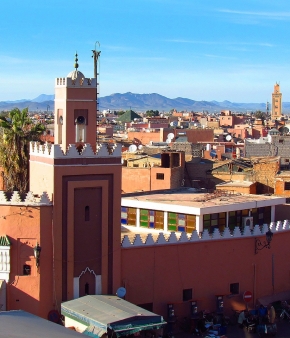 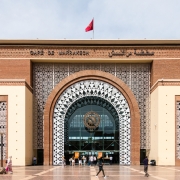 Morocco is very much the land of the Berbers and the earliest nomadic herders in the millennia B.C. were still identified as such. The Romans came, saw, built Volubilis and were ultimately conquered by the mountain guerrilla tactics of the same Bereber people. By the 7th century A.D., however, the armies of Mohammed brought a new conquering potency – that of religion – and Islam took wholesale root and has remained the faith of the vast majority. Typical of the locals, though, the different strands and interpretations of the Shi’a faith led to a series of rises and collapses of great dynasties: by the 820s A.D., Fes was the capital of the Idris-Sid state whilst the 11th and 12th centuries brought the Almoravids, supplanted in the 1140s by the Almohads, architects of their capital Marrakesh’s delightful Koutouba Mosque with its 70m tall minaret. After two centuries of Merenid rule, the Saadians ruled from 1524-1659, bequeathing future generations their building skills, typified by the tombs in old Marrakesh. Whilst the Alawites have ruled since then, their control was largely wrested from them by the French in 1912 who set up a colony here, offering the Spanish a northern enclave around Tangier. The capital shifted to Rabat and once again the Berbers took to harrying the occupying forces from the mountains. By 1855 Mohammed V was allowed to return, paving the way for independence and a period of autocracy alternating with democracy. However, the royal regime since the 1990s has been successful in self-reformation and democracy is a prized achievement, alongside significant improvements in human rights and economic growth, the benefits of which are typified by such as the new high speed rail links.

Tangiers, gateway to the new high-speed train route that links the first port after Europe to the Atlas Mountain heartlands, has always been an entry point for visitors and riding the train south reveals just how successful agriculture has become:  the surprisingly green irrigated patchwork of the north of Morocco bears witness to a country on the move. Intrinsic to the future success of the nation is tourism.

Whilst trekking in the raw idyllic beauty of the High Atlas and climbing Mount Toubkal’s 4,167m is a growing trend, it is the historic cities which truly shine as draws to visitors. Casablanca, or Casa to its friends, is nowadays a thriving Atlantic port-city of 3 million has incredible diversity: the colossal Hassan II mosque, largest in the world outside Saudi Arabia, boasts dazzlingly polished ornate tiles which lead to the world’s tallest minaret and a prayer room with a glass floor above the brooding ocean where 25,000 can pray simultaneously; in the municipal heart of the city, a cornucopia of delights will overwhelm your senses, from the beautiful Art Deco colonial edifices and grandly carved stone frontage of the King’s Palace to the elegantly laid out formal gardens of Place Mohammed V; the new Medina, or Habous Quarter is a classic melting pot of souks and tea houses, whilst the old Medina, encircled by 16km of historic city walls is a place to simply wander and drink in, amidst its shady, winding streets and warm welcomes; a short wander to its shores will reveal La Corniche, the trendy waterfront, the Royal Moroccan navy base and a delightful promenade.

In contrast, Marrakesh, sitting regally in the Middle Atlas Range, taps into a timelessness which is entirely seductive. The celebrated 14th century Madrasa of Ben Youssef is an exquisitely ornate complex of prayer halls, monastic cells and cooling marble courtyards whilst a foray into the Medina of Old Marrakesh reveals treasures such as the beautiful Bahia Palace and the opulent home of the Saadian tombs, marking the flowering of the local culture in the 16th century.

After strolling through the sensory explosion which is the Jemaa el Fna Square with its beguiling music and dance, snake charmers and kaleidoscopically colourful vendors, choose a trip to the cleansing steam-rooms, saunas and baths of one of the city’s hammams, treat yourself to some of the bountiful array of tagines, stews and sweet desserts which define Moroccan cuisine, or simply wile the hours away with locals over a drink of mint tea, providing the perfect culmination to days spent in this glorious melee of cultural wonders.

The ancient cultural hotspot of Fes, Meknes’ hill-top imperial pomp, the incomparable oasis gem of Ouarzazate, the blue city of Chefchaouen, and so the list of wonders here builds with seemingly no end. The perfect springboard to delve deeper into West Africa, Morocco itself first offers pace and languid contemplation, compelling intricacy and endless expanses of Saharan sands, historic enlightenment and contemporary grandeur, all in equal measure. Let us help you pick and choose just how.

Read about some of our other African tours.