The internet is full of statistics claiming one in every two hundred men can trace their lineage to Genghis Khan. He was obviously a busy chap. Tales of 13th century Mongol hordes ready to storm the gates of Vienna suggest European civilisation only just escaped a barbarian apocalypse.

In fact, as the 20th century proved, Europe fomented its own apocalypse. Soviet purges destroyed the fabric Mongolian society, levelling monasteries, exiling and murdering citizens. Emerging from a Soviet ‘iron curtain’ first drawn by Stalin, Mongolia struggled hard to reassert itself. Since its Democratic Revolution in 1990 the tide has turned.

More significant than ever, the festival of Nadaam is a joyful manifestation of Mongolian identity and a fascinating fast track lesson in the nation’s proud cultural history. For some, Buddhism, big skies, expansive steppe landscapes, and nights spent in ger camps together kindle sparks of a nomadic ancestral memory, at least for one in every two hundred men…

Mongolia – its very name is synonymous with remote, with the outer edge of the world.

Sitting between two vast neighbours, Russia and China, Mongolia is characterised by unthinkably vast swathes of wilderness populated by thinly scattered groups of nomads following time-honoured traditions, eking out an existence in the never-ending steppe.

Once at the very forefront of world civilisations, when the armies of Genghis Khan swept across the Eurasian landmass in search of conquest and glory, Mongolia is now one of the least known and least visited countries in the world.

The extraordinary festival of Naadam is the highlight of the Mongolian summer, with celebrations taking place across the country. On this tour we will enjoy the festival with local families in a relaxed and friendly setting for a truly authentic experience.

We arrive in Ulaan Baatar, Mongolia’s capital where we are transferred from the airport to our hotel. Depending on the time of your arrival this evening you will be invited by your guide to a traditional folk concert. Overnight Bayangol Hotel or similar. (D) 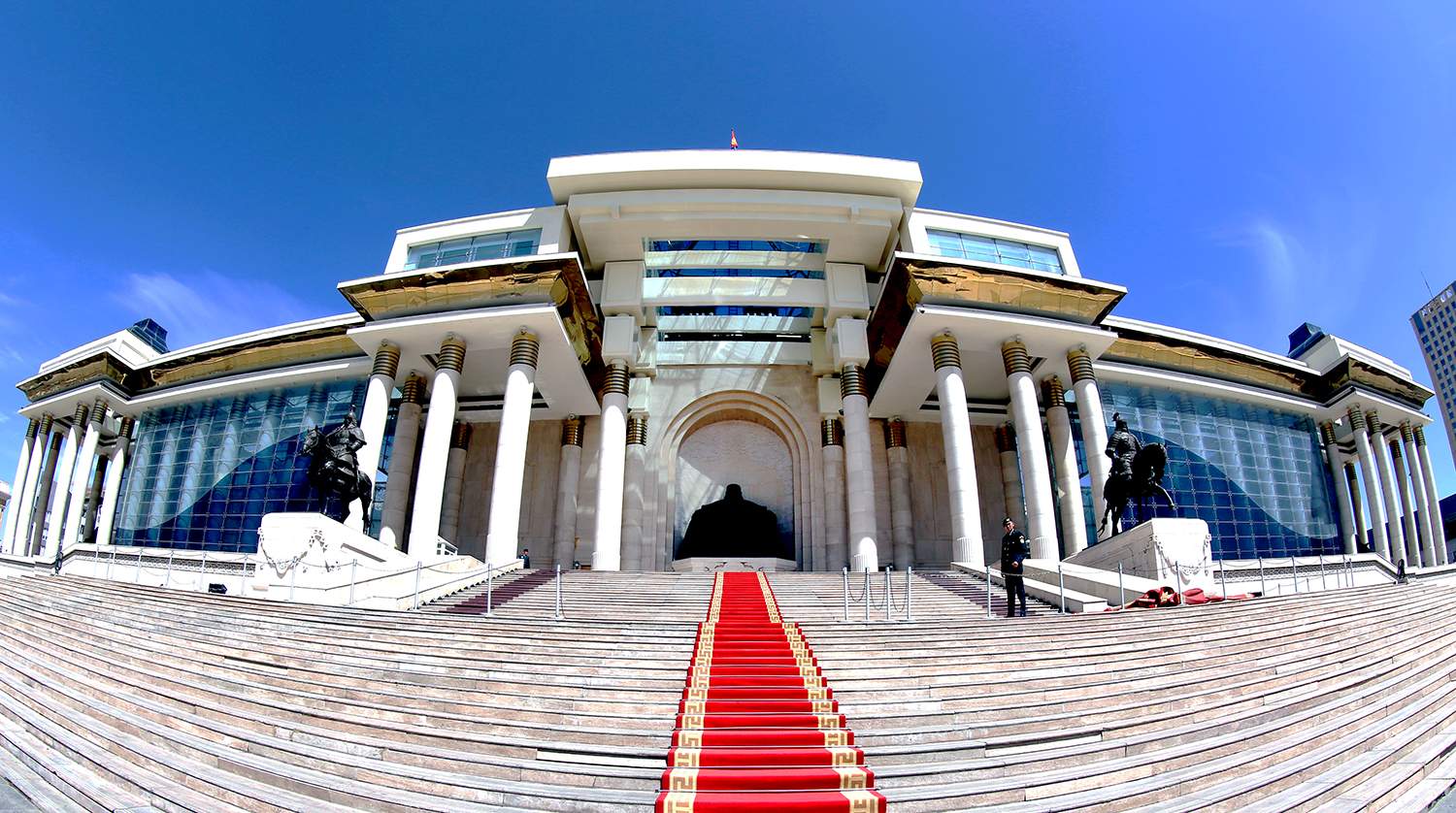 This morning we drive to the Hustai National Park which is home to the only truly wild horses on earth; the Takhi horse. Several decades ago, wild horses had disappeared from Mongolia, victims of habitat loss and poaching. However small numbers survived in European zoos and from these scattered remnants, through a program of careful breeding and international cooperation, the wild population was rebuilt. Now Hustai is home to some 250 wild horses, of which 130 were born in the wild. Overnight in ger camp. (BLD) 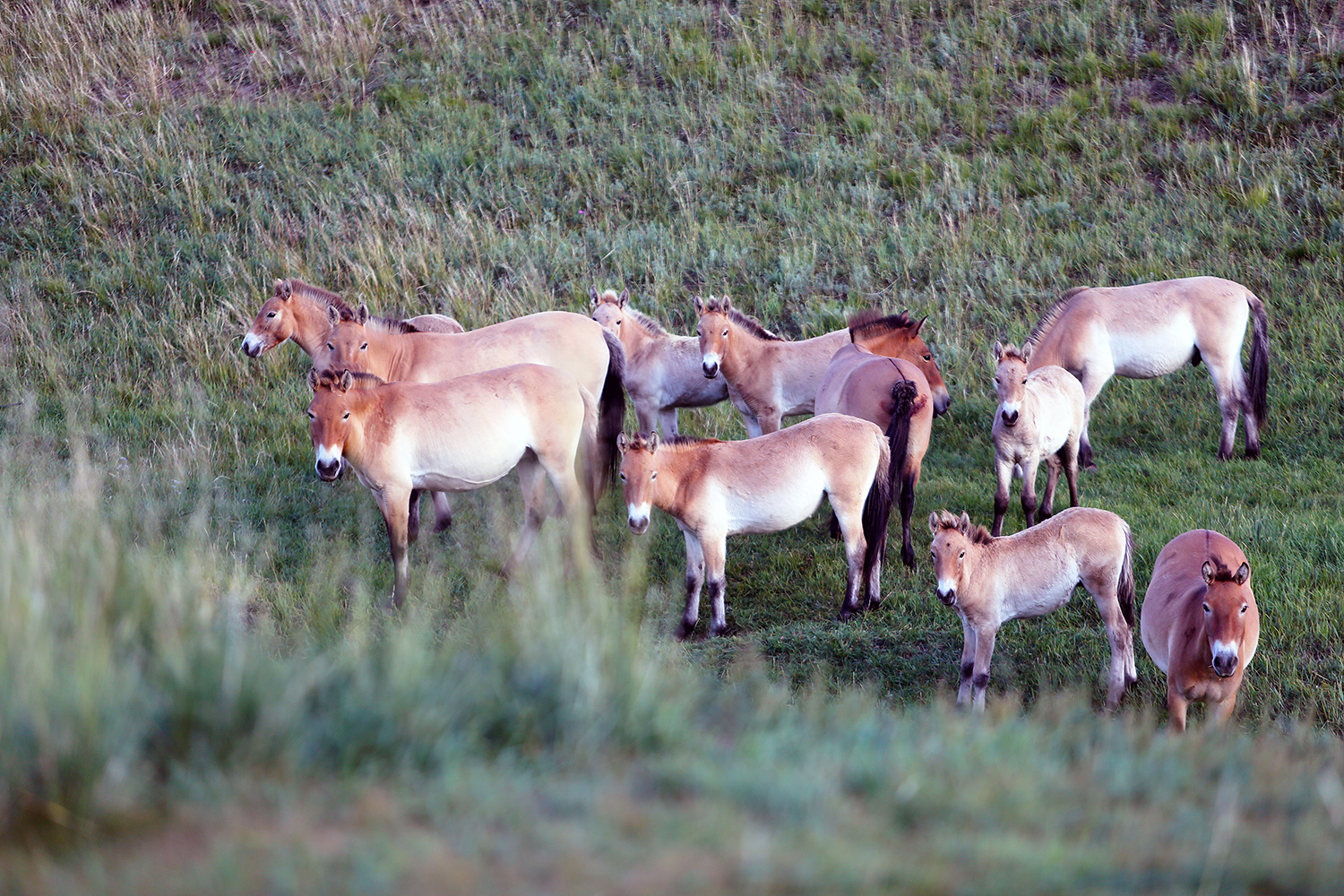 This morning after breakfast we drive to Kharkhorin town, the ancient capital of Chinggis Khan’s Mongolia in the13th century. We visit Erdene Zuu monastery, which was built from leftovers of Kharkhorin’s ruined city in the 16th century. Sadly, a communist purge destroyed almost everything but a few main monasteries. There are numerous unusual cultural and religious exhibits here as well as a Tibetan-style monastery still active in the Erdene Zuu and important to the area. Overnight at Urguu ger camp. (BLD) 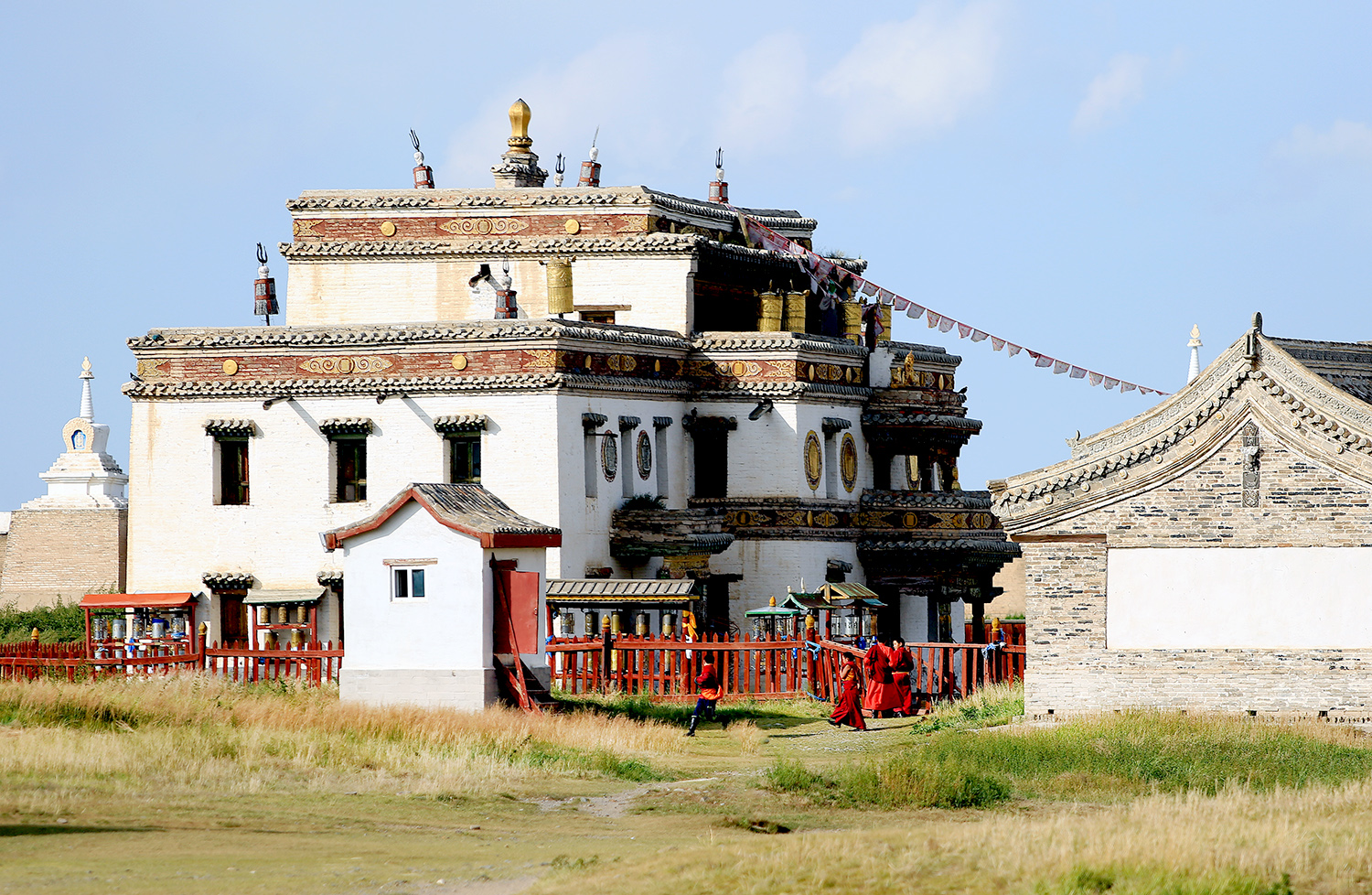 After breakfast we drive to Mongolia’s sand dunes Elsen Tasarkhai, otherwise known as the Little Gobi, an 80km long beautiful stretch that is unlike anything else in this country. After a good walk in the sand dunes we ride a Mongolian two-hump camels for 1-2 hours in the fantastic scenery of Little Gobi (the camel ride can be skipped if you do not wish to do it). Overnight in ger camp. (BLD) 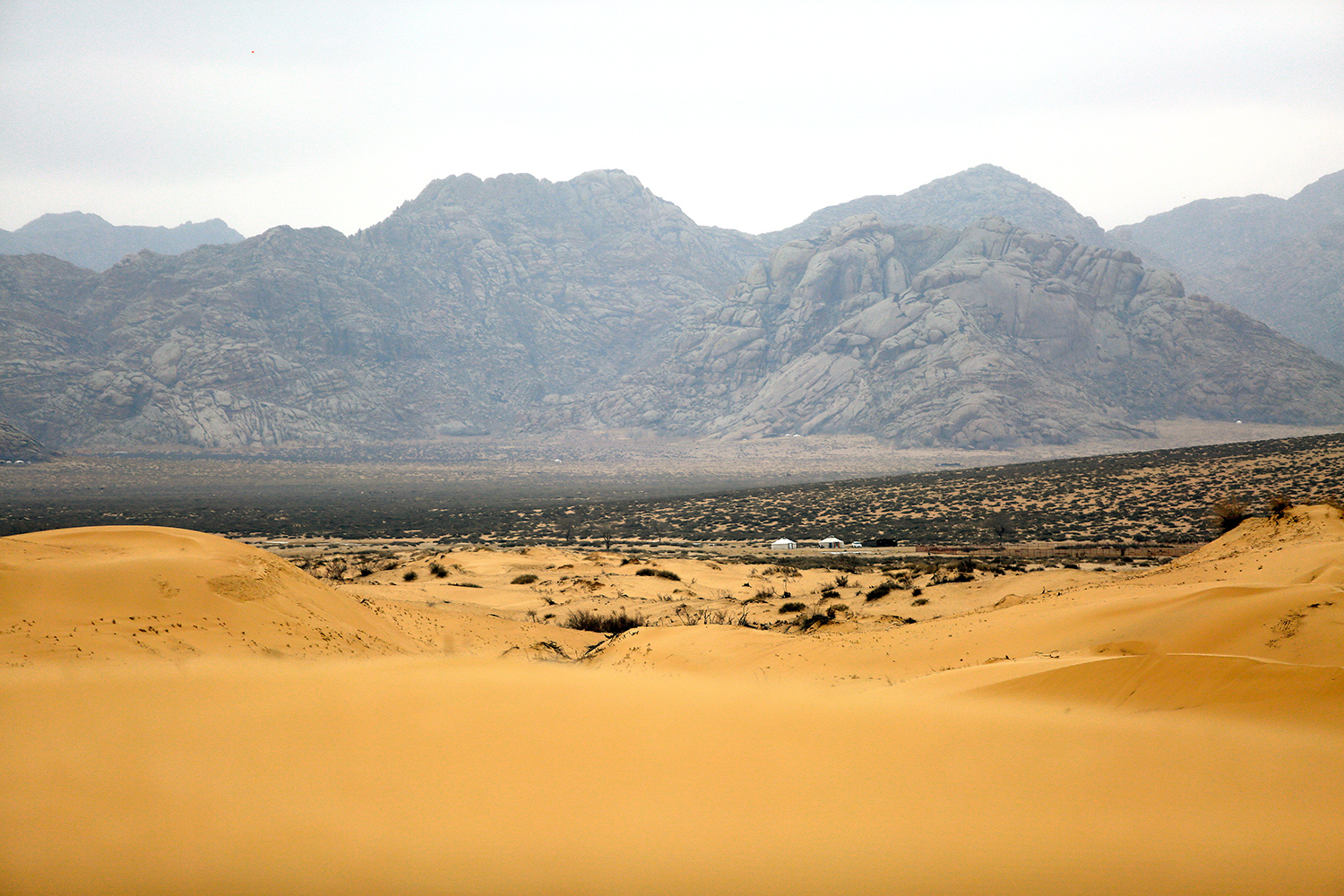 After breakfast, we drive to the giant stainless-steel statue of Chinggis Khan, located 50km east of the capital. On our way there, we will have lunch at the capital. After visiting the statue complex, we continue driving to Terelj National Park, a granite rocky area, where we transfer to our ‘ger’ tented camp. Overnight in ger camp. (BLD) 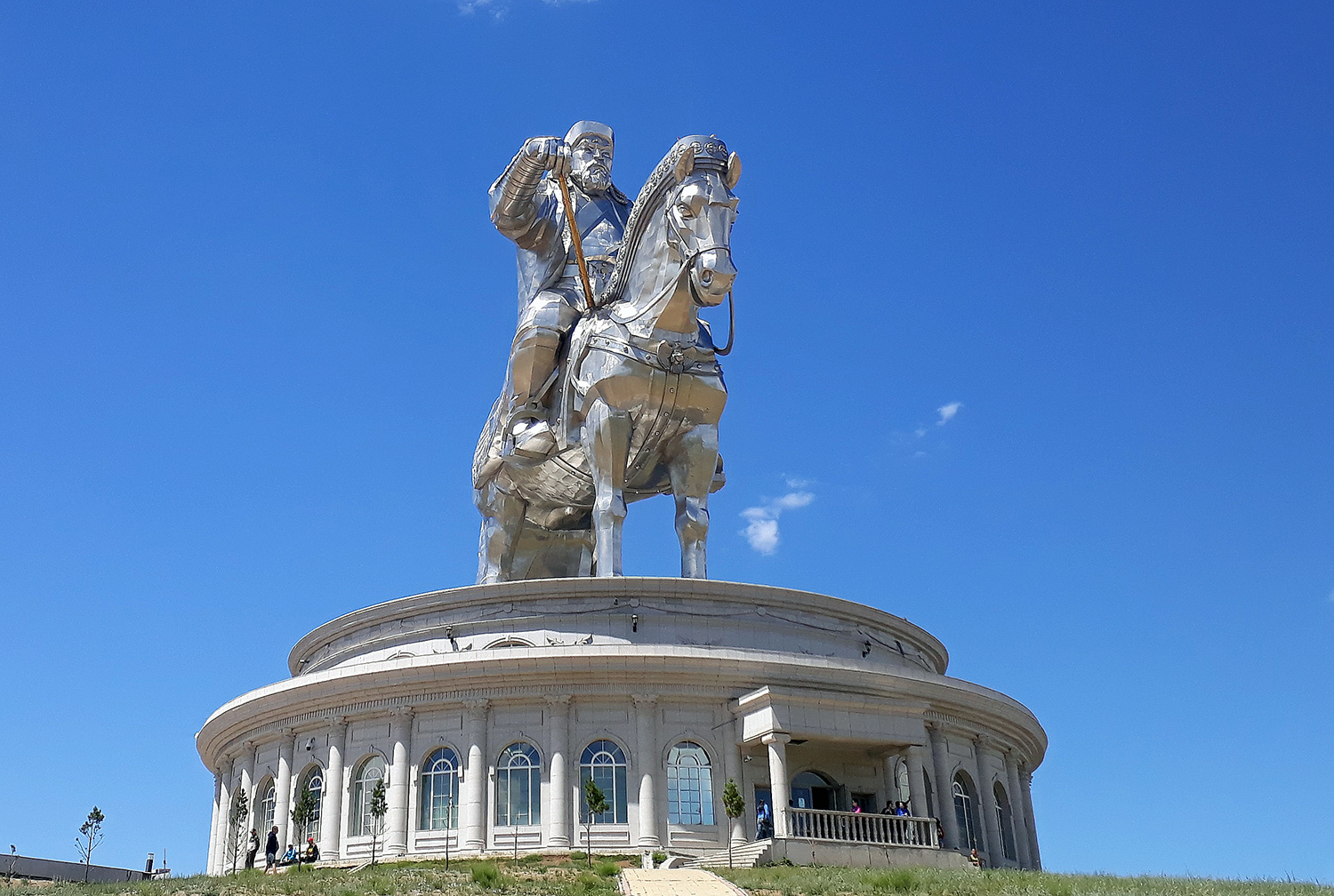 This day we will go and explore the park – an outstanding region of alpine scenery and unique granite rock formations such as the “Turtle stone”. After lunch we go on a short walk through the forest to the Aryabal meditation and initiation temple of the all-seeing Aryabal diety of compassion and mercy. Overnight in ger camp. (BLD) 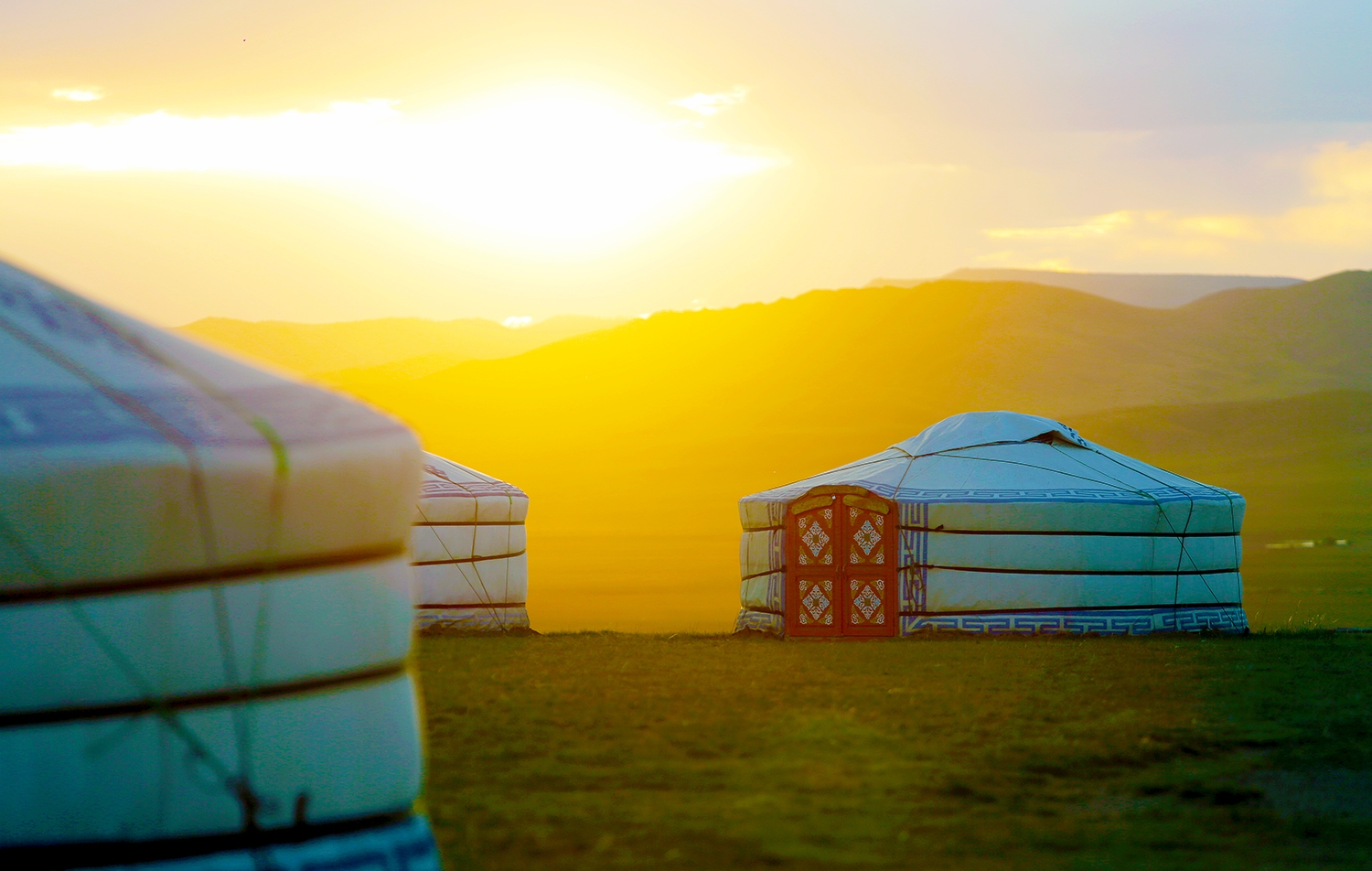 This morning we will head into the Gun Galuut National reserve boasting its beautiful pristine nature which will give us the opportunity to walk in the famed grasslands and truly appreciate the beauty of this sparsely populated country. The Argali, listed as the very rare species of wild sheep, are the main inhabitants of the reserve. Those wishing to have a horse ride can do so while beginners are also able to have lessons (the activity can be skipped if you do not wish to do it). Overnight in ger camp. (BLD) 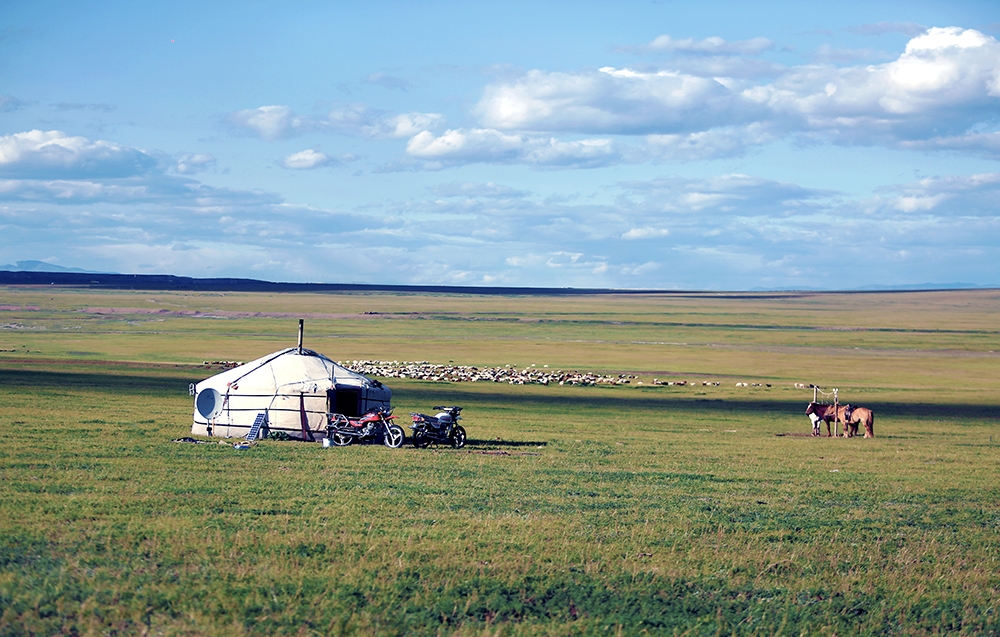 (Total driving: 30 km on tarmac road to Baganuur and back to our ger camp, approx. 40 minutes)

This morning we visit the opening ceremony of the Naadam Festival and enjoy a full day watching various activities including archery, wrestling and horse racing. The colourful festival of Naadam is the highlight of the Mongolian summer, with celebrations taking place across the country. We are lucky to be out of the rush and heat of Ulaan Baatar, and able to enjoy the festival with local families in a relaxed and friendly place for a truly authentic experience. Everyone in town, as well as people from other provinces, arrive at Naadam in their best traditional suits, called a Deel. It is very colourful and Deels are worn everywhere, even when on horseback. Competition is fierce as men compete against one another to win titles for horse racing, archery and wrestling – ‘war games’ based on ancient Mongolian soldiers’ everyday exercises. Overnight in ger camp. (BLD) 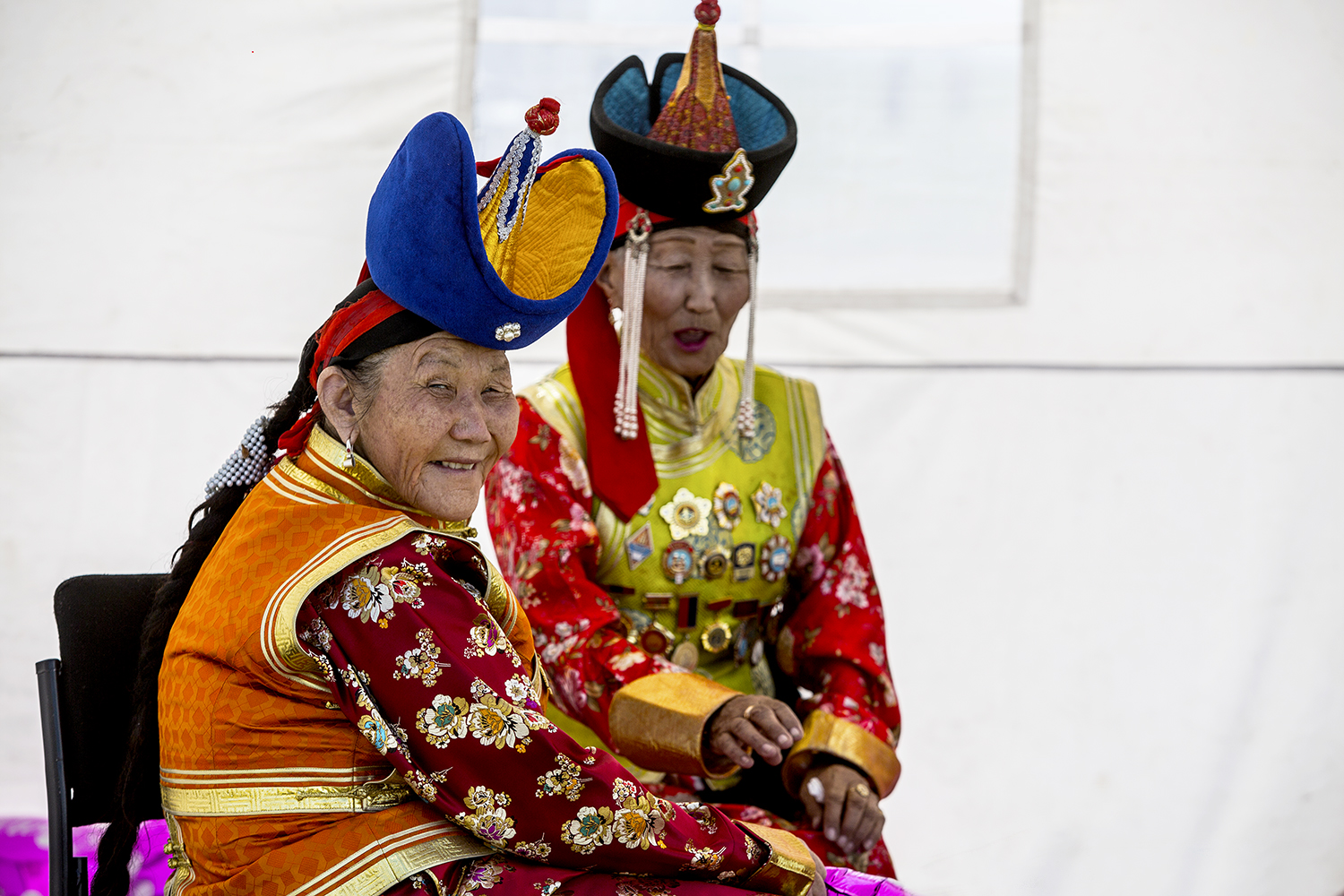 (Total driving: 30 km on tarmac road to Baganuur and back to our ger camp, approx. 40 minutes.)

This morning is spent enjoying the second day of the festival watching the horse racing. Horses have long played an important role in Mongolian history and this sport is greatly prized. The build-up and training for this event is vigorous and the crowd of onlookers are known to get quite vocal! Overnight in ger camp. (BLD) 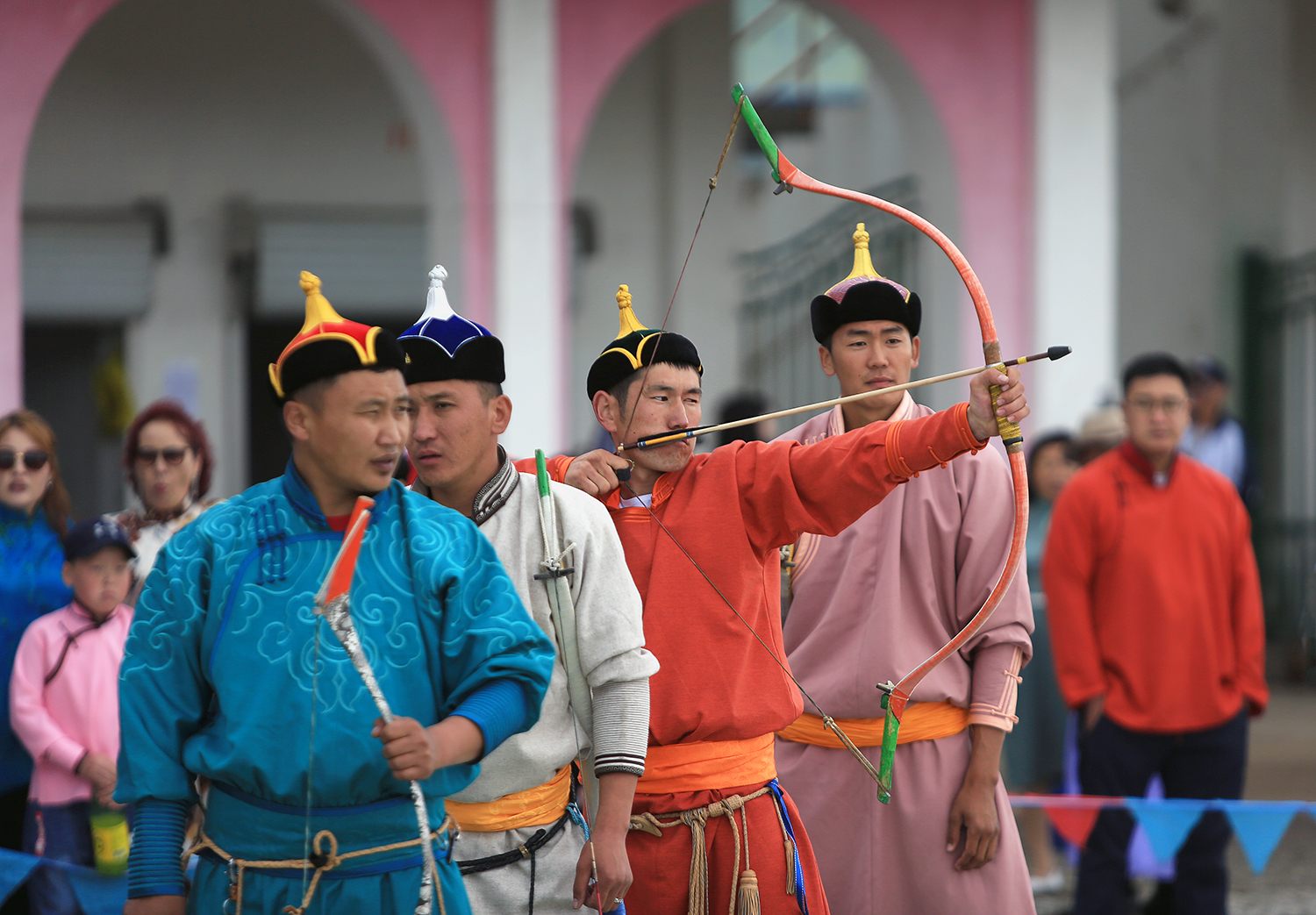 This morning we will go on a drive to Jargalant village where we visit the Aglag Creation Monastery. Visiting rock carvings of several deities of Buddhism, spirits of nature and unique rocky formations. Overnight in ger camp. (BLD)

After breakfast we drive towards Amarbayasgalant Monastery; considered the second most important in Mongolia (after Erdene Zuu Khiid in Kharkhorin) and the most intact architectural complex in Mongolia. The area is famed for its stunning scenery of steppe and grasslands, its national parks and wildlife. In the afternoon we’ll have the chance walk up and visit the monastery. Overnight in ger camp. (BLD) 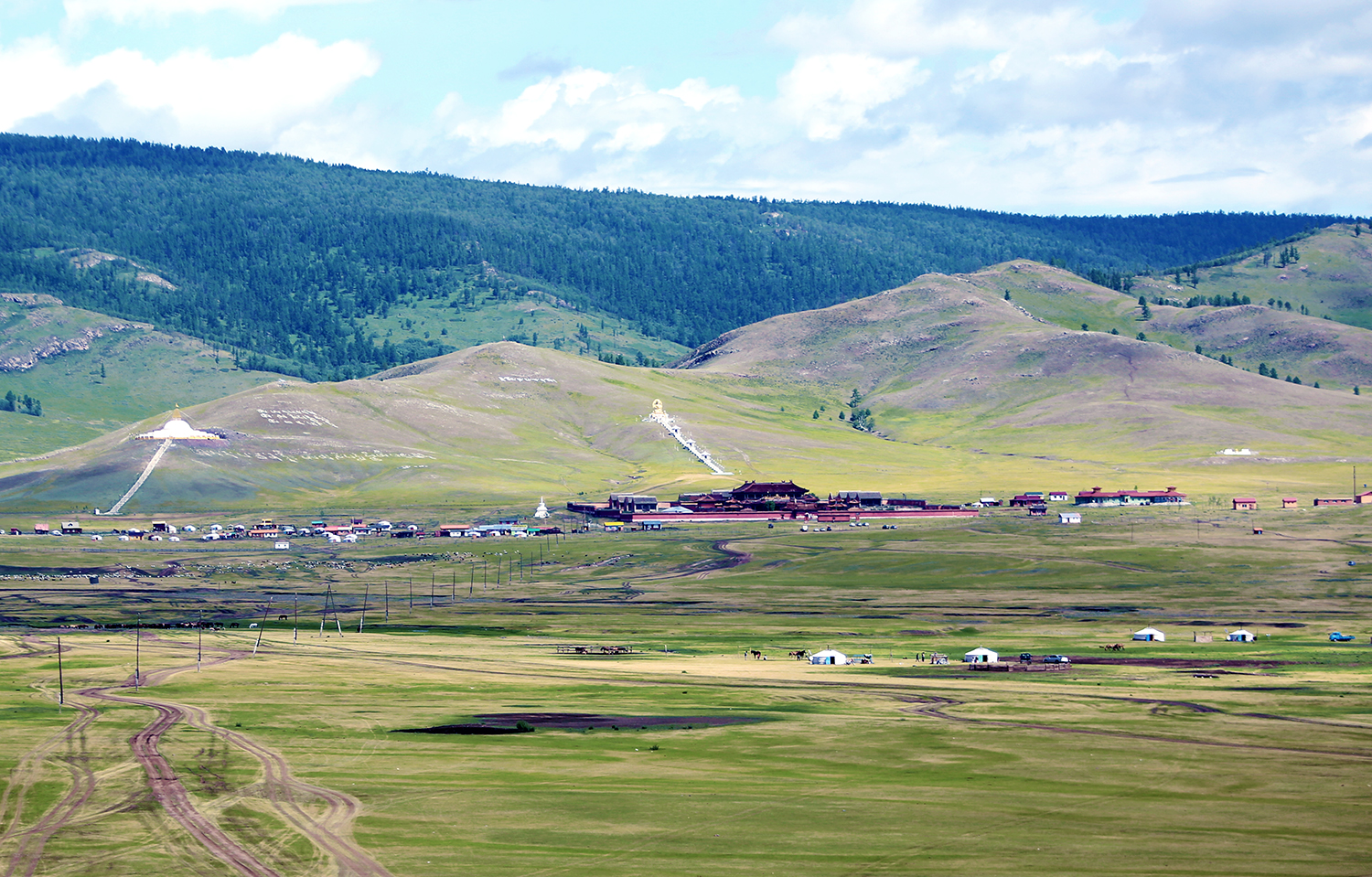 This morning we drive to the beautiful steppe at Ogii Lake. It is a wonderful place for birdlife and a multitude of cranes and ducks migrate here, attracted by the rich fish-life that populates the lake. Overnight in ger camp. (BLD) 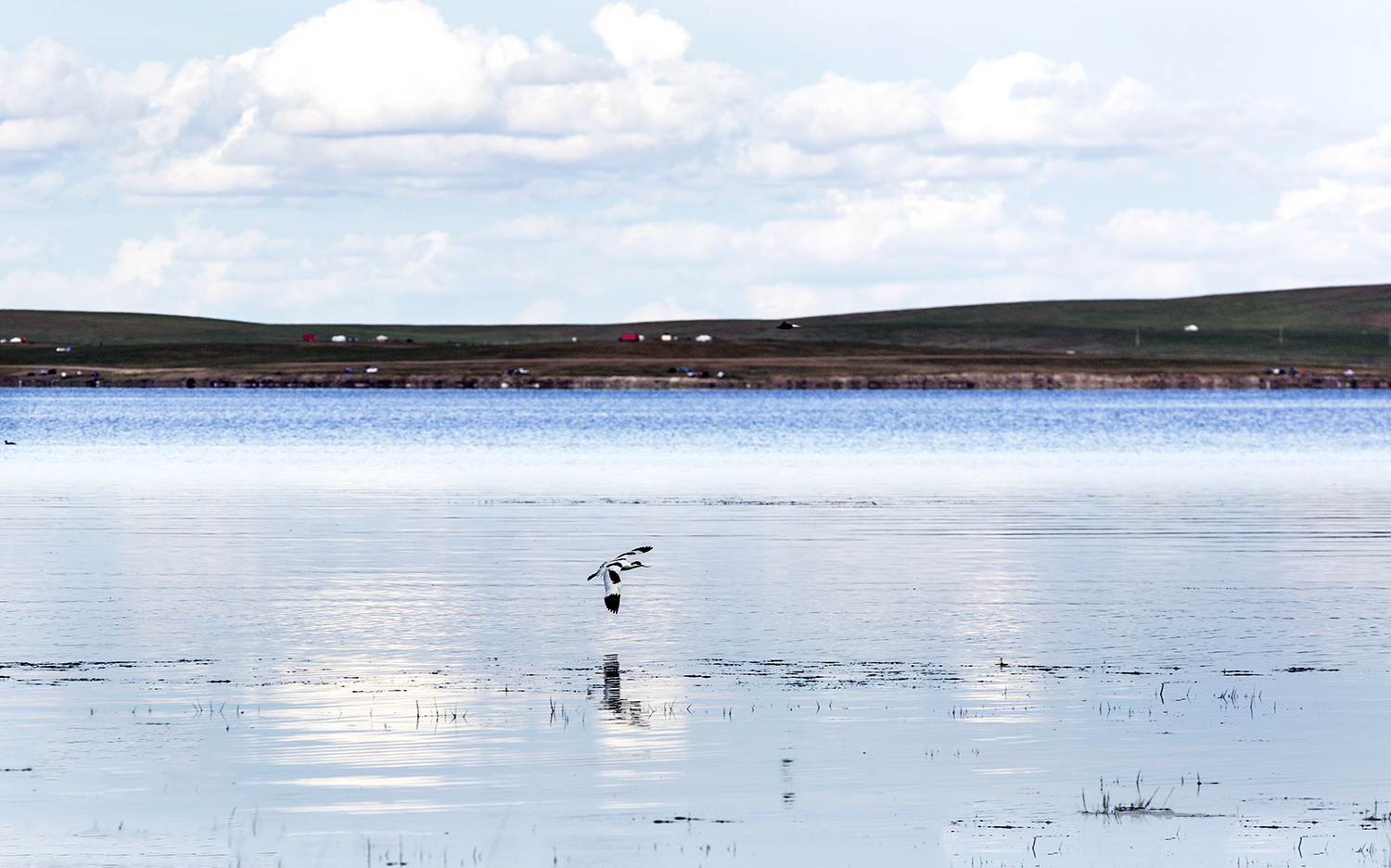 This morning we return to Ulaan Baatar and transfer to our hotel. On our way we will have picnic lunch. In the late afternoon there will be an opportunity for shopping or to explore the city on your own, before our farewell dinner. Overnight Bayangol Hotel or similar. (BLD) 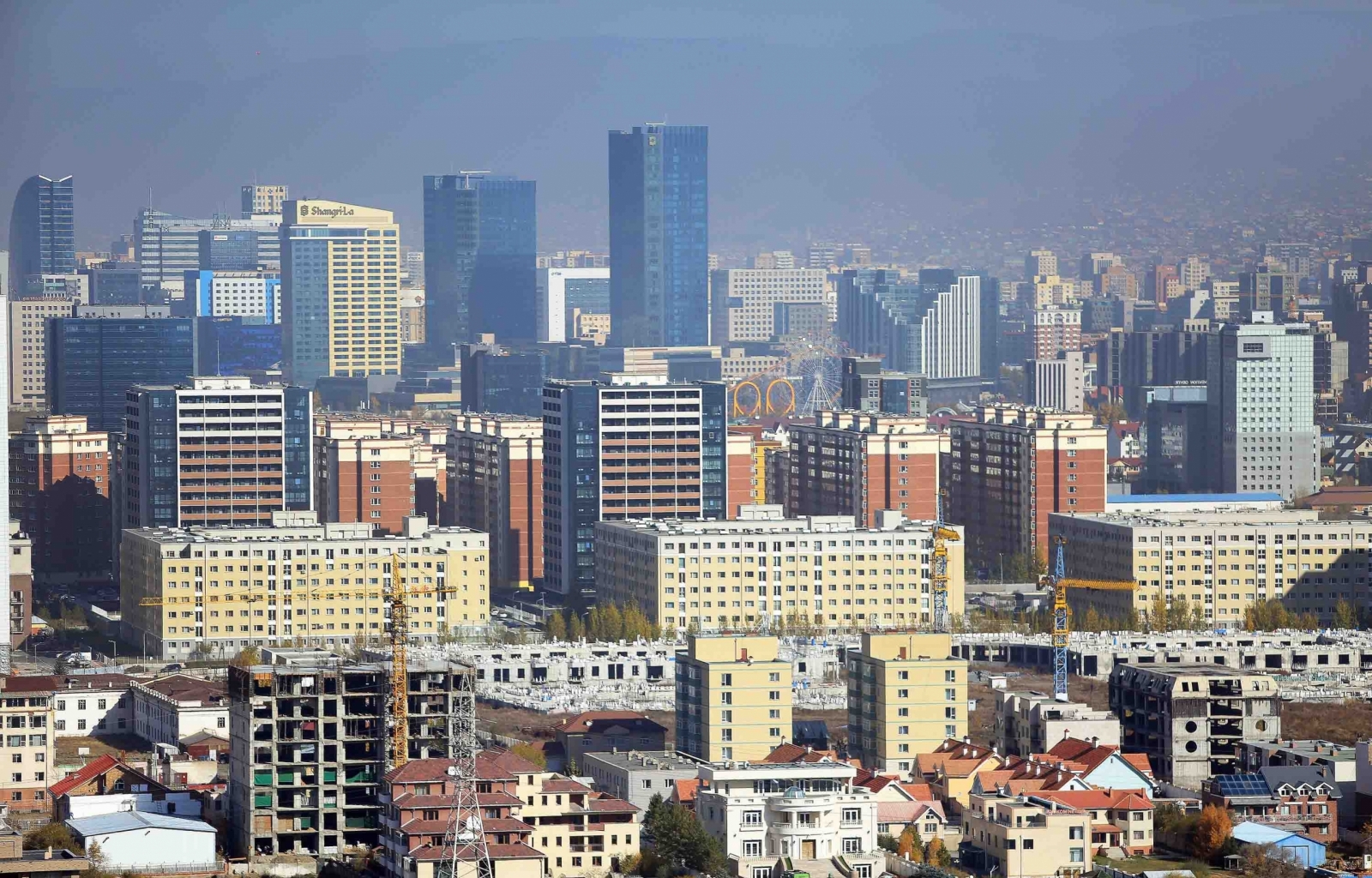 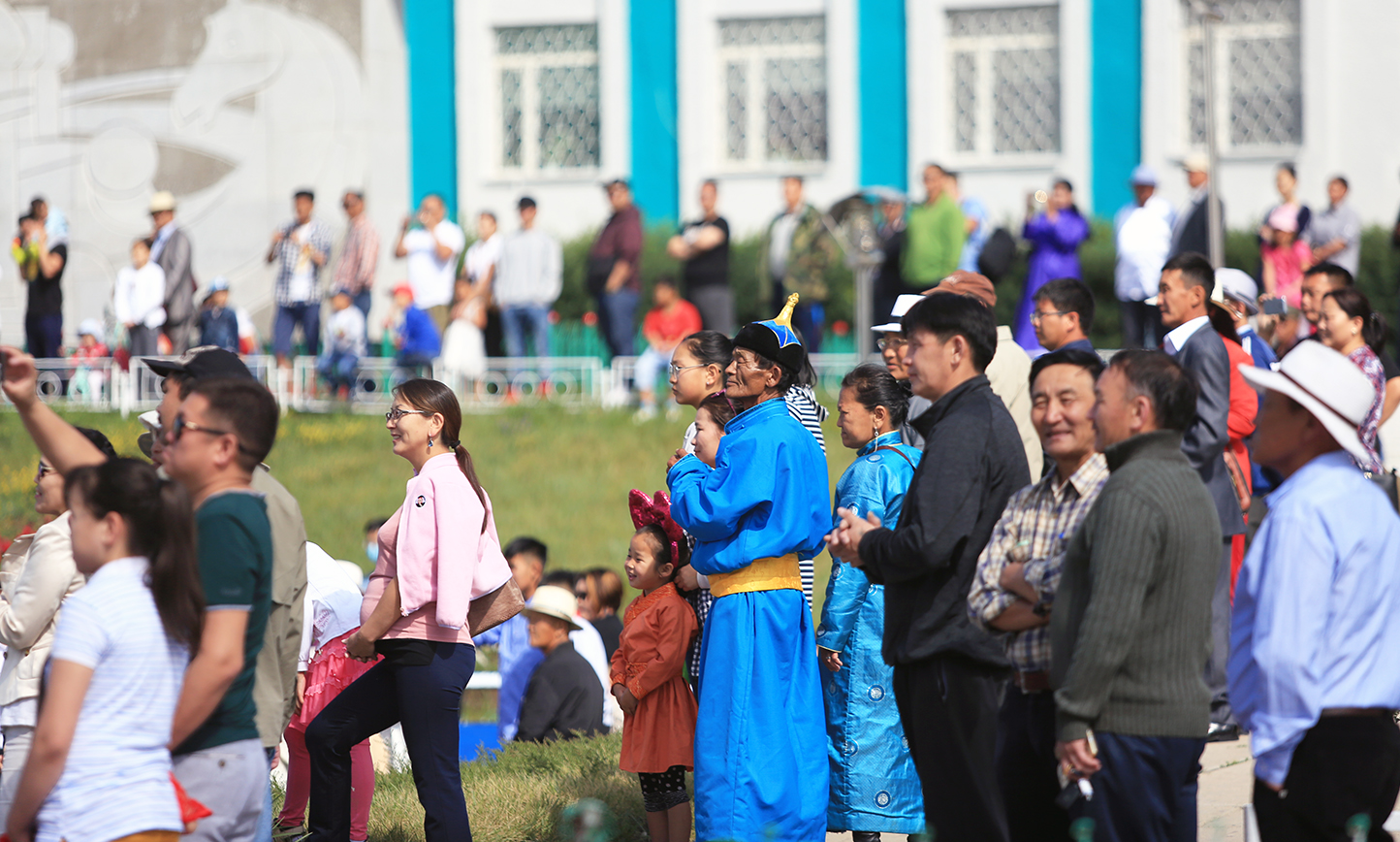 As our tour celebrates Naadam in a rural setting, the festival dates will not be confirmed until nearer the time, so the order of the itinerary may change. Therefore, please note that 2023 tour dates are still provisional and may change by a few days.

Return flights from London to Ulaan Baatar start from £850 subject to availability and the route taken. Contact us for a quotation.

On the first day of the tour, you can arrive any time before 17:00.

Airport transfers are an additional £15 each way if you not arriving on the start/finish dates and are booking pre and/or post tour accommodation.

Extra night accommodation pre and/or post tour in Mongolia costs from £55 per person, per night sharing a twin/double room and £64 per person in a solo occupancy room.

Kindly note that we can also tailor a similar or totally different itinerary to meet your requirements. Please get in touch to start planning the perfect tailormade trip. 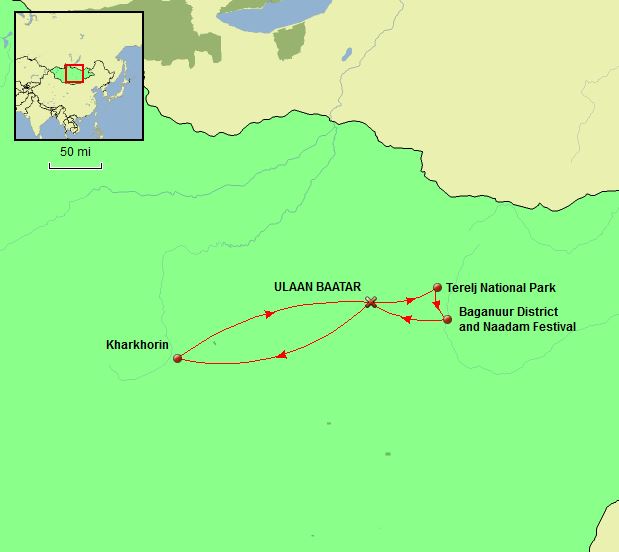 The tour was absolutely brilliant, as was our guide Itchko.

Tulga is amazing man. Superb guide. A shame that ‘Modern’ Gers are being built, rather than the traditional style ones. Bayra the other driver was excellent. Extremely satisfied with everything. Everything was excellent.