Equatorial Guinea is one of the least visited countries in the world; an unspoilt nation of virgin rainforest, white sand beaches and an incredible diversity of plant and animal life. Jim Louth of Undiscovered Destinations gets back to his roots on this small group tour to Equatorial Guinea.

I had always wanted to tour Equatorial Guinea 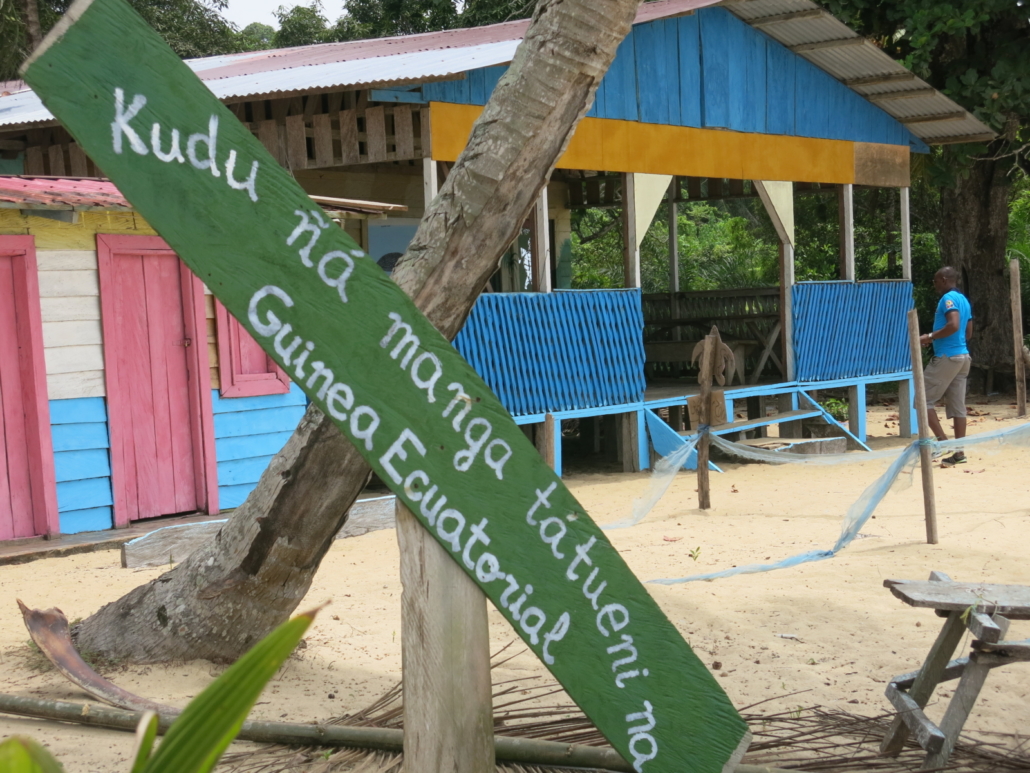 Those who know me, or have chatted with me at the Destinations Show, will have heard of my fascination with and desire to set up a tour to Equatorial Guinea. Now in our 11th year of trading, and as we continue to grow, some of our travellers from the early days have commented that we have gone slightly more ‘mainstream’.

So I was delighted when I received an invitation to meet Equatorial Guinea’s ambassador to London so we could discuss the country’s tourism potential. Cleary this was an opportunity for me to get back to our roots and offer a truly unique destination.

With the visa issued and with minimal fuss, I was soon on my way to the capital. Malabo, thanks to the country’s current oil and gas boom, is served by daily flights with Air France and others.

With a convenient connection from my home city of Newcastle I opted to fly through Paris. Before reaching Malabo, the flight stopped in Douala, Cameroon, where the aircraft virtually emptied, except for 30 or so passengers, mostly up front in business class, who stayed onboard for the 20 minute hop over to Malabo.

‘Name of your company?’ asked the immigration official clearly expecting me to say the likes of Exxon Mobil or Total. I replied ‘Undiscovered Destinations’.

Having failed to impress, I followed-up by explaining I’m a tourist. ‘Tourist????’ came the reply with a look of utter disbelief. After conferring with an equally bemused colleague, the official soon allowed me on my way.

After a good night’s sleep at the centrally located Yoly Hotel, it was time to leave Malabo and explore Bioko Island, with a visit planned to the mainland part of the country later on in the trip. Immediately I began to remember what my colleague Aled had told me about his recent trip to another oil boom destination, Azerbaijan.

Malabo is similar to Baku with its new found energy wealth on glittering display, in the form of office blocks, new hotels, and government ministries, alongside some fine examples of colonial architecture, from when the country was part of the Spanish empire.

Once out of Malabo and heading south towards mountainous rainforests and the small town of Moka, I was struck by how green and lush the country is. And secondly I was impressed by the quality of the roads. As with many other parts of Africa these days, the Chinese are busy improving the local infrastructure, which, for a change, made getting around by car very easy.

Having made a quick inspection visit to the excellent Moka Hotel I was interested to learn more about the locally based conservation project, ‘Bioko Biodiversity Protection Program’, an academic partnership between Drexel University in Philadelphia and the Universidad Nacional de Guinea Ecuatorial in Malabo.

Their mission is the conservation of Bioko Island’s biodiversity, especially its critically endangered primates and nesting sea turtles, through the development of economically sustainable educational programs, research programs and conservation activities.

Although it has to be said that wildlife viewing opportunities, at least on a short visit to the country, are almost non-existent, some wonderful treks can be arranged, and these will feature in our soon to be announced small group tour.

My tour to Equatorial Guinea moved on as we headed to the coastal town of Luba, which with a population of just 7,000 is nevertheless Bioko’s second largest town, and home to a free port. The next morning we travelled to what I had been assured would be one of the highlights of my visit, Ureca and its stunning beaches. I wasn’t disappointed.

What makes this place even more special is the high waterfall which cascades down to the beach and into a natural pool, perfect for a taking a refreshing dip. Ureca will be another place visited on our tour, when we will return during the dry season (November to February), as travellers will be rewarded with the opportunity to watch turtles come ashore to the nearby beaches to lay their eggs.

Leaving Bioko behind it was time to take the 30 minute flight over to Bata, capital of the mainland region of Rio Muni (and larger than Malabo). Bata is a clean, charming town with wide streets, colourful buildings and a bustling atmosphere.

Having checked in at the local Ibis Hotel, which surprisingly, given that it is known in Europe as a budget chain, had a very welcoming outdoor swimming pool, it was back on the excellent roads, for the drive north to Rio Campo.

It is perhaps now that I should address what I expect will be a common question about our tour to Equatorial Guinea: the matter of police checks. It is true these are very common and visitors should always have their passport to hand, together with the required tourist permission document.

On our 3 hour journey to Rio Campo we must have encountered half a dozen or so checks, but personally I found it good fun to ‘play the game’ as I began to joke with my guide Robin.

On most occasions you are stopped with a good deal of surprise, or curiosity, but I never felt intimidated by the sunglasses-wearing officials, who generally took their duties very seriously. As with travel anywhere in Equatorial Guinea caution should be observed when taking photos and if in doubt make sure you ask.

So on arrival in Rio Campo and because of its river border position with Cameroon and police presence, Robin sought permission from the local commander. Unusually the commander spoke excellent English which he had learnt in Swaziland, and welcomed me to his country.

After taking some photos of the river, and its opening into the Gulf of Guinea, Robin and I took shelter from the sweltering sun and enjoyed a cold beer in the local bar, come convenience store, come waiting room, for those making the crossing to Cameroon. After knocking back our first beer, there appeared a second bottle.

‘Did you order this?’ I asked Robin. ‘No, it was me’ replied the police commander, now standing in the bar. ‘I got you that, welcome to my country’. I explained to Robin that this is why I travel, not just to see great sights, but to see what makes a country and its people tick, and to get beneath its not altogether positive image.

So, yes, you should be prepared for some frustrating and tiresome police checks whilst in Equatorial Guinea, but in my experience they’re not all bad!

After a comfortable night at the Ibis the next day we started our journey inland, and to what should be the country’s top sight, the Monte Alen National Park. Having read that the park is home to gorillas, chimpanzees, forest elephants, crocodiles and many other species of wildlife, I was disappointed to learn that that the reality is very different.

Sadly the blight of poaching and illegal hunting has for many years gone largely unchecked, to the extent that I’m told that there is now little or no large wildlife left in the park. And since the 2013 demise of ECOFAC a well-respected conservation organisation, previously funded by the European Union, the problem has got worse.

How sad, but after all, this illustrates the importance of doing the recce, I thought to myself.

Despite the lack of wildlife and with the only hotel in the park being abandoned, Monte Alen will still feature in our tour. The location is lovely and there is the potential for some fantastic trekking in the tropical forests. We should also do our bit to support the handful of workers still employed in the park.

From Monte Alen we continued our journey inland to the town of Mongomo, the birth place of the country’s current president Obiang and Africa’s longest serving leader. Although perhaps lacking sights, the pool at the 5 star Mongomo Hotel was a welcome attraction as was the opportunity to witness daily life of this bustling border town with Gabon.

On our return journey back to Bata we made a slight diversion to take a look at the country’s new capital in making Oyala. Although many have questioned the need for a new capital to be built from scratch in the depths of the jungle, it is difficult not to be impressed by the sheer scale of the project.

And Robin was particularly keen to see the site of the new University of Central Africa, at which one day he hopes to study. However controversial Oyala may be if it brings hope and opportunity to the likes of Robin then this has to be a good thing.

Back in Malabo there was just enough time for a de-brief and to discuss the proposed tour with our local partner.

Over lunch at the superb La Luna restaurant we chatted frankly about some of the challenges we may face operating a tour to Equatorial Guinea. It has to be said that the time keeping of some of my drivers was a little too relaxed for my liking, and that we will need to be very careful about managing travellers’ expectations, particularly when it comes to Monte Alen.

But what Equatorial Guinea lacks in ‘must see’ sights and wildlife, it makes up for in other ways.

Perhaps the strongest appeal for many will be the opportunity to get really off the beaten track, where western visitors are so rare that kids in local villages will shout out ‘Chino’ not realising the difference between a tourist and a Chinese construction worker. And without doubt the country is amongst the greenest and most lush I’ve seen anywhere, with some truly spectacular natural attractions, including stunning beaches, waterfalls and fantastic trekking.

Most memorable for me will be my encounters with the local people, including the many officials. You should be prepared to ‘play the game’ as I did, and you never know, you might even be rewarded with a cold beer from the local police commander.

Or you will leave with one or two funny stories, that makes travel such a fun thing to do. Mine has to be on one of my journeys out of Malabo. Just outside of the capital we stopped at the customary military check point to show our ‘documentos’. Bizarrely I found myself handing over my passport to a young soldier wearing the appropriate army fatigues.

Embossed on his camouflage t-shirt it said ‘Andy’s Stag Do, 01/09/2009 – Newcastle’. And on the back it had the previous owner’s stag name ‘Broony’. Well at least Broony would be pleased to know his cast off is now being put to good use!