Italy is one of the most visited European countries. A country that boasts the eternal city of Rome, excruciatingly romantic Venice and myriad northern cities that are a who’s who of renaissance art-decadence. Surely little remains to be discovered amidst Italy’s familiar landscapes?

And yet the peninsula, northern plains, mountains and host of islands still conceal places where a true sense of adventure is readily on offer. You just need to delve just a little deeper.

With such surprises, a hidden Italy beckons tantalisingly.

Embarking on one of our group or tailor-made tours mean reappraising Italy’s entire character. Whilst still celebrating its much vaunted history and culinary delights, we seek more obscure corners. We aim to discover new takes on the nation’s landscapes and to see that there’s more to its past, well… pasta than most people ever see!

We will reveal some of the continent’s finest trekking experiences in isolated Calabria, where Greek colonists have influenced the culture for millennia. Here lie true wilderness and sequestered sandy shores in the obscurity of Marche. It is here that you can tread snowy Alpine slopes in the morning and marvel at mirage-rippled flocks of flamingos in the afternoon. And here the dramatic fusion of the irresistible powerhouses of nature and the Normans dominate the Sicilian skyline.

This sense of space and seclusion is the Italy we will offer you.

Places to visit in Italy and on our Italian tours 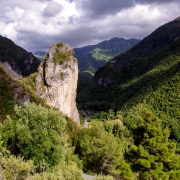 In simple terms, Italy’s front page attractions are a huge draw to tourists. Ironically this is leaving a world beyond eager to welcome you to explore its treasures. The quiet borghi of Calabria see few visitors and so the hospitality still has an all too rare sense of delighted novelty to it. Equally, as crowds flood to city piazzas and sultry shores, the wild landscapes remain places where one wanders for hours, encountering little more than the occasional goat and savour nature’s wondrous tranquillity. Rural Italy is at once beautiful, elegant and rejuvenatingly languid.

As a region, few places can have played more decisive and pivotal roles in history than Italy. The south was an integral part of the Magna Graecia power. And after Carthage’s dalliance with the peninsula, the gradual formation of the empire centred on the great city of Rome needs no rehearsing here.

These epochs that defined the last millennium B.C. and the early centuries A.D. is everywhere in evidence. From the grand sites of the capital to the fallen Doric columns that act as makeshift benches on rustic railway stations. The coast speaks endlessly of the extraordinarily prolific trade which dominated the Mediterranean in this era. It was this that led to the building of so many commercial, sacred and recreational masterpieces.

The Fall of the Empire

As with all empires, the fall of Rome at the hands of marauding northern and Asian tribes led to a power vacuum. Put in simple terms, a visit to any village, town or city, will reveal how it was the papacy that gradually filled the gap. Devotion certainly fuels the arts. The startling architectural gems that crop up in the most unexpected corners of the country are nowhere better illustrated than in the delightful churches of Italy.

Whilst Catholicism may have been a coagulating force spiritually, it was not until the wars from 1848-61 when Italian unification was achieved. The whole region within what the historian Cato called the Alpine ‘walls of Italy’ was defined by powerful city states. These vied for power and most of the post-Roman period was characterised by shifting boundaries and kingdoms within these confines. It was in these great cities – Turin, Pisa, Florence, Milan, Genoa, Bologna, etc., where much of the great intellectual developments of the second millennium A.D. took place. This was where the flowering of sculpture, art and music that defined the Renaissance had their home.

Most powerful of all, Venice (a city capable of funding an army that captured the great city of Istanbul in 1204) and Rome were the last to fall into line. They were still mustering armies and wielding financial power enough to resist a rising nationalistic tide for over a decade.

The birth of modern tourism

Again, Italy’s place on the world stage is a fascinating one in the 20th century. Political swings from socialism to fascism lead to the rise of Mussolini and the disastrous events of the axis alliance and defeat in World War II.

Yet, despite such tribulations, Italy has long held a fascination for travellers across Europe. It was a key feature of the European Grand Tour of the eighteenth and nineteenth centuries, with travellers drawn to the cultural centres. Its 7,600 km of coastline can claim to be the original Riviera of Europe. Yet a land of 301,340 km² also boasts large areas of undisturbed wild space. Five percent of the country is national park. The fact that Italy straddles several topographical worlds including central Europe, the Alps, the Balkans and even North Africa, means that it has incredible natural diversity.

Whilst much of the landmass is taken up by the northern plains, 35% of the country is mountainous. This rises to Mont Blanc’s 4,810 m while the south boasts seismic influence, including Europe’s only active volcano in Vesuvius and Etna’s regular dazzling eruptions. Hence this is Europe’s most faunally biodiverse nation boasting 57,000 animal species and a third of all those in the continent. Those who enjoy wildlife cannot fail to be enticed by a landscape encompassing so much. Here you can find the Italian wolf subspecies, brown bear, chamois, ibex, crested porcupine and around 516 bird species.

Explore off the beaten track

Tourism in Italy has traditionally focused on the heralded centres of famous cultural landmarks. There are also the prolific infrastructure of the ski and coastal resort centres. Rural Italy, especially in the mountainous, southern and island settings, is a place broadly ignored by outsiders. Visitors will find themselves on less-trodden trails and settling down for a glass of wine in a tiny piazza frequented only by locals. As such, wandering the environs of this Italy feels at once compelling and thrilling, as if you had stepped into a bygone era of travel.

Expect he warmest of welcomes amidst populations where hospitality towards visitors is a proud byword. You can also look forward to having extraordinarily beautiful historic and sites and natural wonders virtually to yourself.

Read more about Italy and our other tours in Europe.