A Journey to the Dawn of Time Tour

Home > Destinations > Israel / Palestine > A Journey to the Dawn of Time

Israel and Palestine – Journey to the Dawn of Time Tour – a 9 day Small Group Tour.  This tour combines with our Jordan tour.

In time-honoured fashion, pilgrims from the world’s great religions flock to the Holy Land, yet Israel and Palestine’s iconic sacred sites reveal only one facet of a land so exquisitely fashioned by the hand of the past.

Indeed, their imprint is only the backdrop to a place alive with the possibilities of the future – its markets, art scene, artisanal streets, cuisine, and landscape all resonate with life which its people are proud to share.

There can surely be nowhere on earth more hotly contested throughout is history, nor more fully documented than the fabled Holy Lands of Israel and Palestine. Our visit there seeks to offer an insight into the incredible longevity and complexity of the character of this enigmatic region. Beginning with the modern splendour of affluent and vibrant Tel Aviv, we immerse you in the proud culture of modern Israel, created in the aftermath of the Second World War, inviting you to explore its cosmopolitan centres and delicious cuisine and then learn something of the skills of viticulture and wine-tasting at the renowned Carmel Winery.

Making a foray into the northern territories, we take you to experience life for a while in the midst of a kibbutz, enjoying the convivial atmosphere of communal living. The tensions that still simmer under the surface of the Israel-Palestine partition disputes curiously find resonance in the echoes of the past, where crusader and Saracen fortresses, basilicas and mosques jostle for prominence amidst the fascinating cities from another turbulent era. We take you to marvel at the preservation of medieval fortifications and sacred spaces in coastal Akko / Acre and Jaffa, and the stunningly situated hill town of Safed which gazes imperiously across the plains and Sea of Galilee.

Further back still into the annals of antiquity, no journey to The Holy Land could be complete without treading the hallowed streets of Bethlehem and the religious capital of three of the world’s major religions, Jerusalem. Sitting resplendently on the huge rocky foundations where Islam, Christianity and Judaism have vied for millennia, the city is a living, bustling and thrilling testament to the devotion of generations and the architectural genius of so many that have gone before. Finally, heading south to the very dawn of human civilisation, we take you to Jericho, a truly astonishing accomplishment where Neolithic people came together to build a colossal walled city, the first example of its kind in human history. Our tour ends, fittingly, by threading through the majestic drama of the wilderness to reach the earth’s profoundest point, the Dead Sea, a place to relax, sinking into the warm embrace of the salty waters and to reflect on a beguiling journey back in time.

Arrive in Tel Aviv and transfer to your hotel where the rest of the day will be at leisure ahead of the tour briefing tomorrow at breakfast. No meals or guided services today. Overnight the White House Hotel or similar. 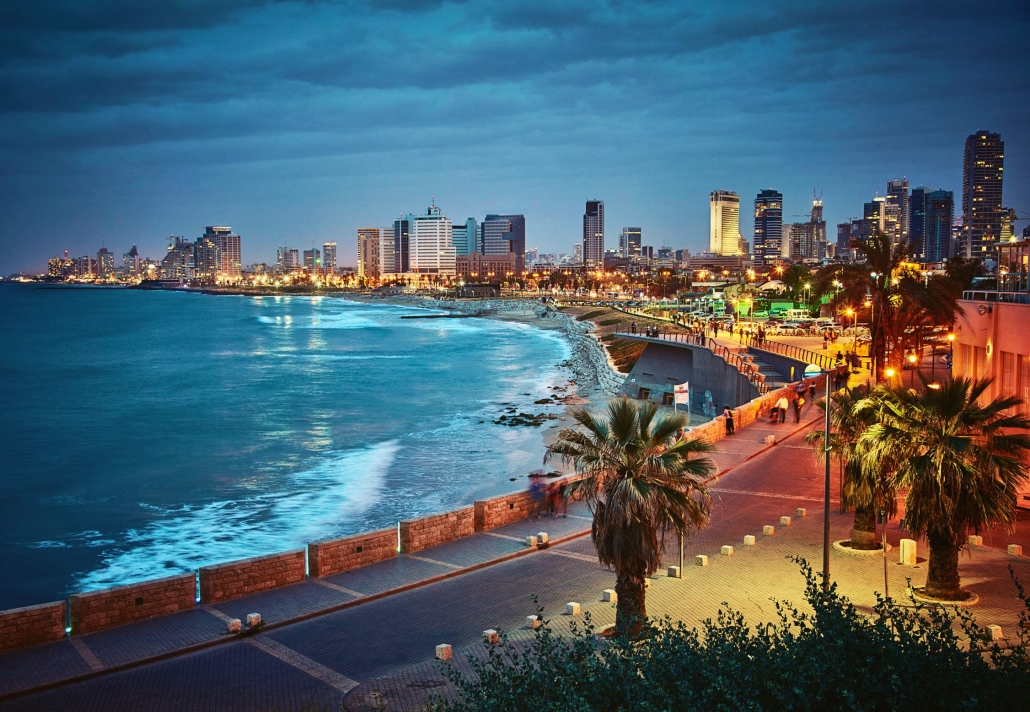 After breakfast and the tour briefing with your guide you will head into Tel Aviv first exploring the areas known as the white city constructed between the 1930’and 1950’s and designated one of the first ‘modern’ UNESCO World Heritage Sites in the world in 2003 representing the worlds’ largest collection of Bauhaus style buildings. Marvel at the iconic architecture and stroll along vibrant Rothschild Boulevard. You continue to Neve Tzedek, one of Tel Aviv’s oldest districts, and head to the legendary Jaffa Flea market to enjoy an authentic lunch at one of the city’s most famous restaurants – Dr. Shakshuka.  Thereafter, you will have some time at leisure to roam around the thronging flea market in search of a bargain. You then continue to the ancient port city of Jaffa -also known as Yafo, impressively regenerated with atmospheric narrow streets and courtyards. Overnight the White House Hotel or similar (BL) 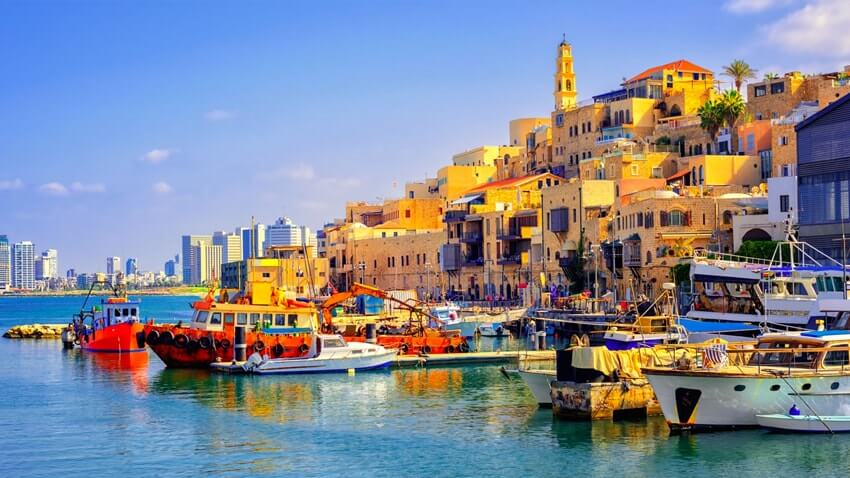 Today you will get the chance to visit Kibbutz Sha’ar Ha Golan where you will enjoy a tour of the kibbutz itself. Enjoy waking amongst the verdant scenery of the kibbutz and gain an understanding of life in the kibbutz and its organisational structure. The area also affords wonderful vistas towards Jordan, the Golan Heights and Syria. Visit the museum exhibiting Neolithic findings from Yarmukian culture.  Overnight at the Sha’ar HaGolan kibbutz (BL) 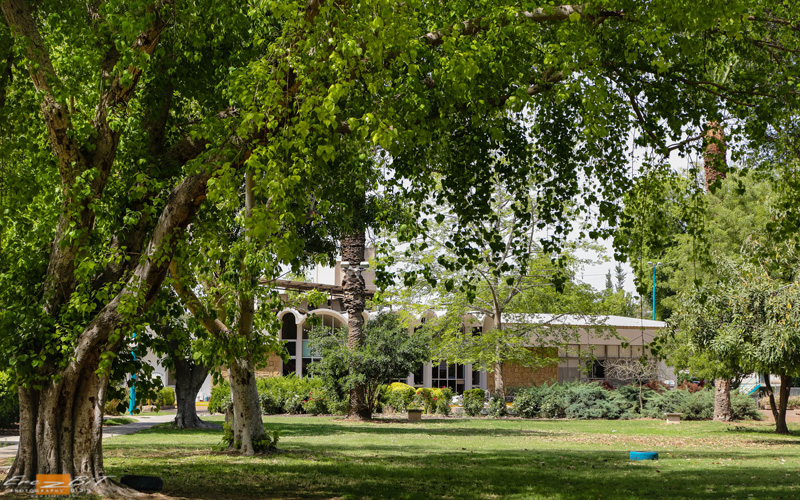 This morning your first stop will be Caesarea National Park, one of the most impressive archaeological sites in the country set amidst a backdrop of the azure waters of the Mediterranean. The beautifully restored harbour is a particular highlight.  You will then enjoy an Israeli wine tasting experience at one of the most unique wineries in the Region, the Carmel Winery.  Learn about Israeli viticulture and the authentic, traditional and innovative technologies now used to produce wine.  You will also have a change to visit the cellars.  Next we visit Akko, steeped in history and the remains of crusader and ottoman fortresses. You will also have time to visit the old Shuk, where vendors continue to enthusiastically selling their wares as they have done through the ages.  You will then continue to Haifa for the overnight stop. Overnight Caramella Boutique Hotel (BL) 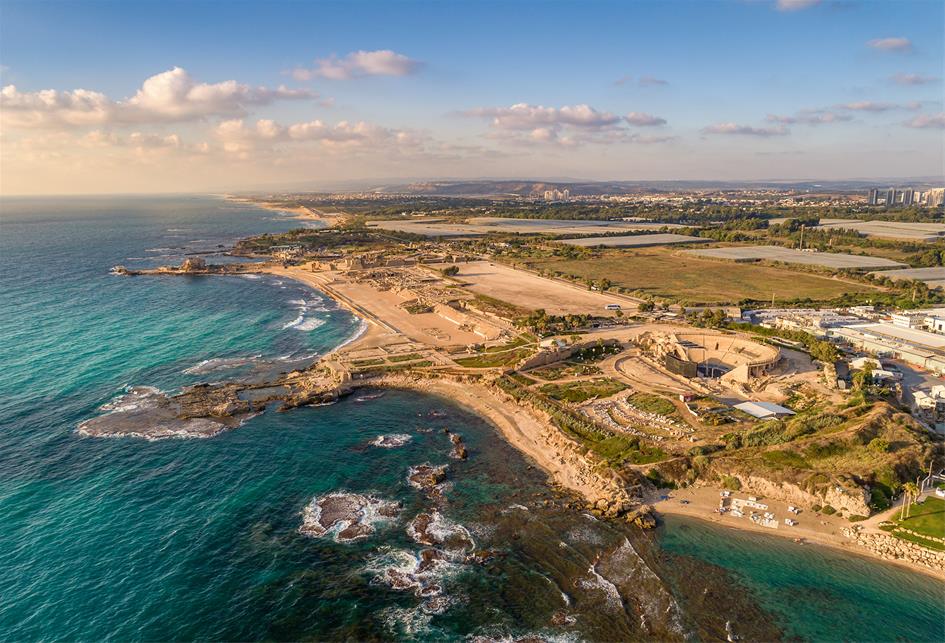 This morning you will visit the port city of Haifa. Imbibe the breathtaking panorama of the Bahai Gardens and Temple, as well as the Haifa Port., after having lunch you will drive to visit Safed, the city of Kabalah and the highest city in Israel situated at over 900m elevation.   You will have time to wander in the old city, enjoying the artistic vibe emanating from the old streets. From Safed you will drive to the Sea of Galilee for a relaxing boat cruise on the tranquil waters before continuing south to Bethlehem for your overnight stay. Overnight Hosh Al Syrian or similar (BL) 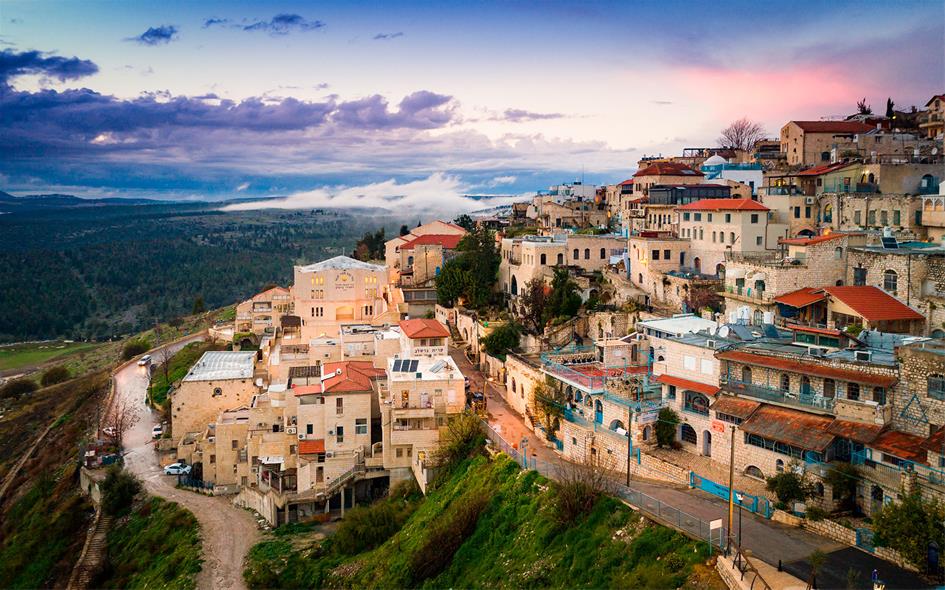 Today you explore the mystical city of Jerusalem. Starting at the Mount of Olives, enjoy the breathtaking panorama across the old city of Jerusalem, with the gleaming magnificence of the Golden Dome of the Rock prominent.  On entering the city’s walls one can immediately feel the history oozing from every angle. Experience the cultural convergence of the four quarters (Muslim, Christian, Jewish and Armenian) and visit some of the most iconic and important sites such as the Church of the Holy Sepulchre, the Dome of the rock (esplanade only) and the Western Wall.  You will also have time to explore old city alleys and the Arabic Bazaar where you may haggle for a bargain if you wish.  Overnight Hosh Al Syrian or similar (BL) 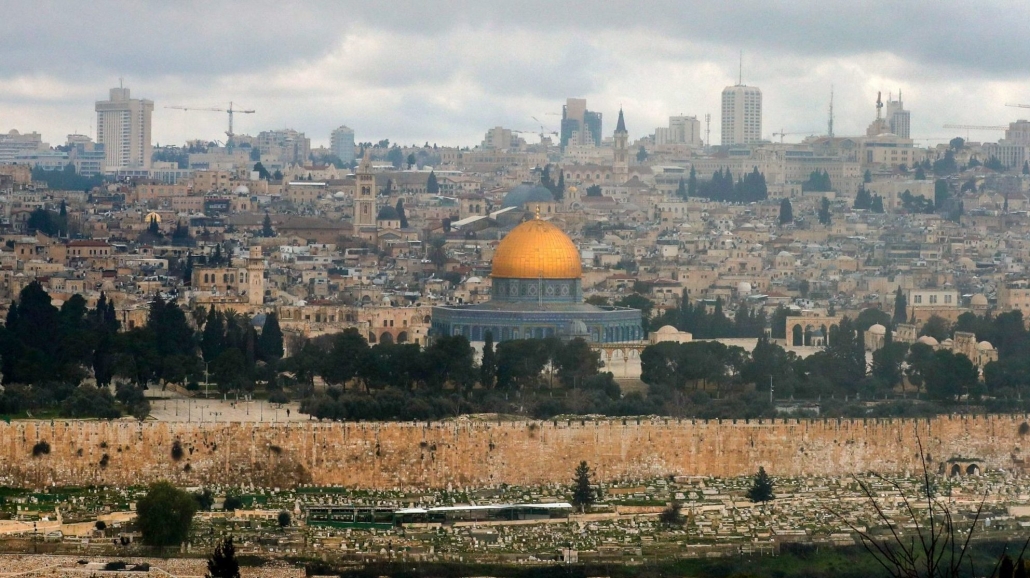 This morning you will visit the beautiful and historical icon that is Bethlehem, visiting the church of Nativity, of course a place of immense religious significance, but also notable for its superb architecture. You will also have a chance to stroll in the Arabic market in the old alleys surrounding the church.  Your next stop is the atmospheric vibrancy of Mahne Yehuda Market, the largest market in Jerusalem with hundreds of vendors selling all manner of goods and this is also a great place to also enjoy some street food if you wish. You continue to the more tranquil surrounds of the village of Ein Karem birthplace in Christian tradition of St John the Baptist, surrounded by olive groves in amongst the charming Jerusalem Hills, seemingly a world away from the thronging streets of Jerusalem.  You will take a walk around the village and visit the Roman Catholic Church of the visitation. You finish the day with a visit to the Israel Museum, boasting a remarkable and broad collection of pieces of artistic and archaeological significance. Overnight Hosh Al Syrian or similar (BL) 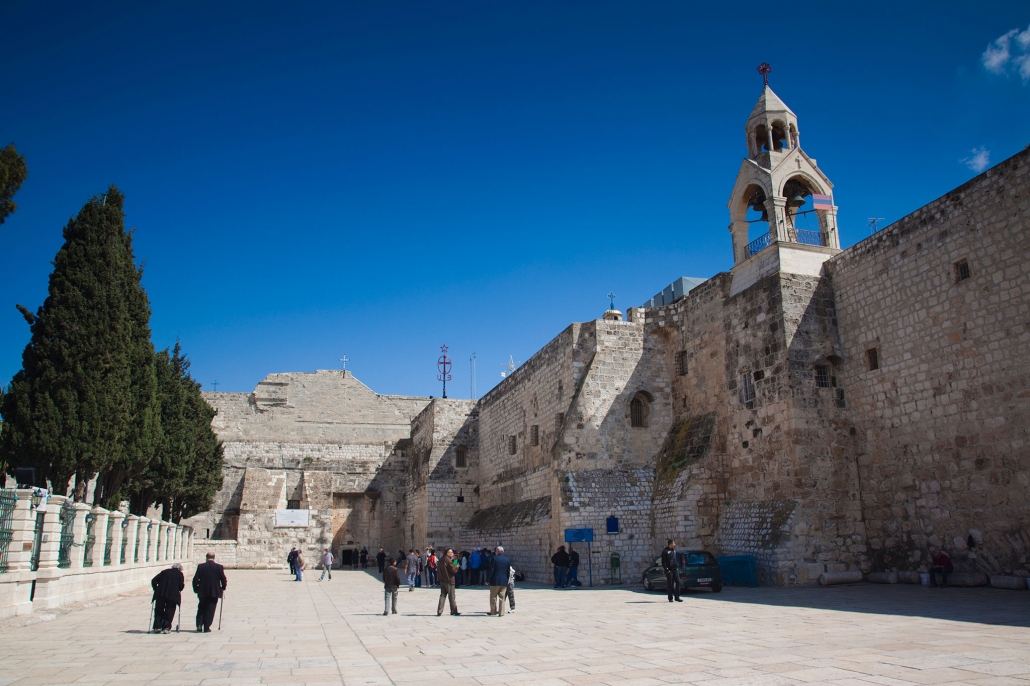 An early start to ensure we can enjoy the spectacular rock sky fortress of Masada (UNESCO) in the soft early morning light. You will then continue Jericho, reputedly the oldest continually inhabited city in the world and the scene of many biblical stories. Here you will visit Mount Temptation and the monastery of the same name. View the sycamore tree climbed by Zacchaeus to gain a better of view of Jesus as he entered the city. Finally head to one of the lowest points on earth to the shores of the Dead Sea, where you will have the optional opportunity to dip into the saline waters or simply to contemplate your journey into this incredible and thought provoking region, before returning to Bethlehem for your final evening at leisure.  Overnight Hosh Al Syrian or similar (BL) 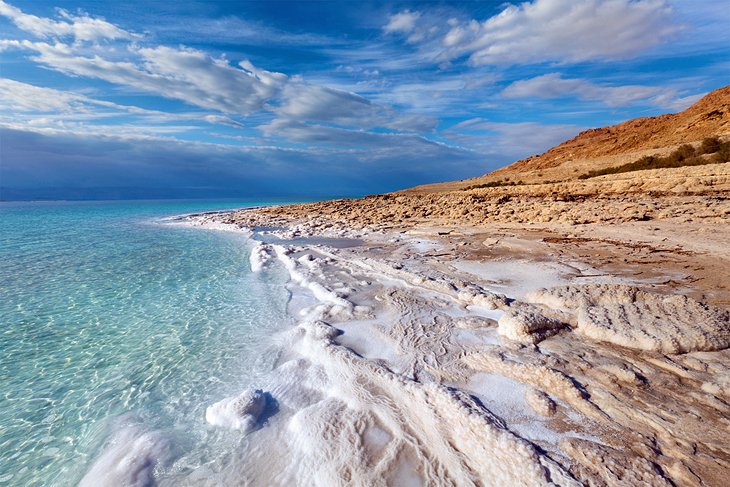 Return flights to Tel Aviv start from £350 from London. Please contact us for a quotation 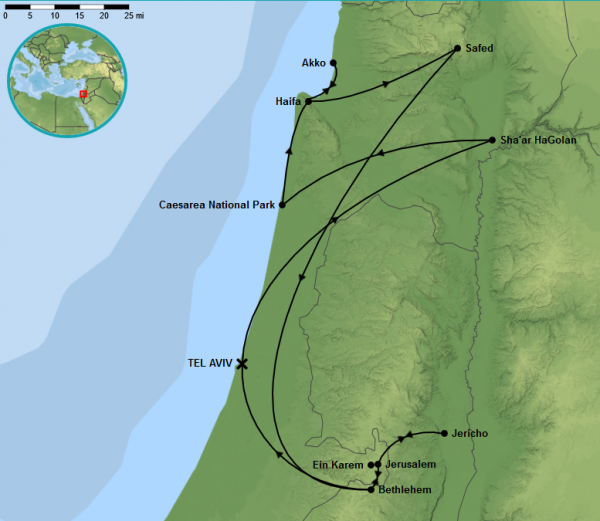 A trip that exceeded expectations. Well supported in India and excellent heritage hotels and comfortable vehicle.

Read more about Israel and Palestine and our other tours