This tour combines Guyana, South America’s only English-speaking state, with the former Dutch colony of Suriname. There’s an immersion in Guyana’s forest habitats, in Iwokrama discovering the flora and fauna of one of the world’s rare pristine primary rainforests.

In Suriname colonial heritage is to the fore, from the UNESCO designated city of Paramaribo to coffee plantations established by English and Dutch settlers. Travelling by light aircraft, 4WD and by boat, travellers meet indigenous communities and those of descendants of Africans slave labour.

The tour offers unusual insights on man’s relationship with his fellow man, and that with some of the world’s most important and fragile environments.

Join us on this fascinating journey into the least known part of South America.

Our small group tour through Guyana and Suriname takes you in to the jungle to look for incredible wildlife such as Jaguar, Giant Anteater and Caiman and experience traditional Guyanese hospitality at Karanambu.

Meet the Makushi people of Surama and experience the rainforest from Iwokrama’s capoy walkway. A real highlight of our time in Suriname is when we look for freshwater dolphins, before we explore the country’s colonial history and experience the culture of the Maroon people.

This is a corner of the continent like no other. 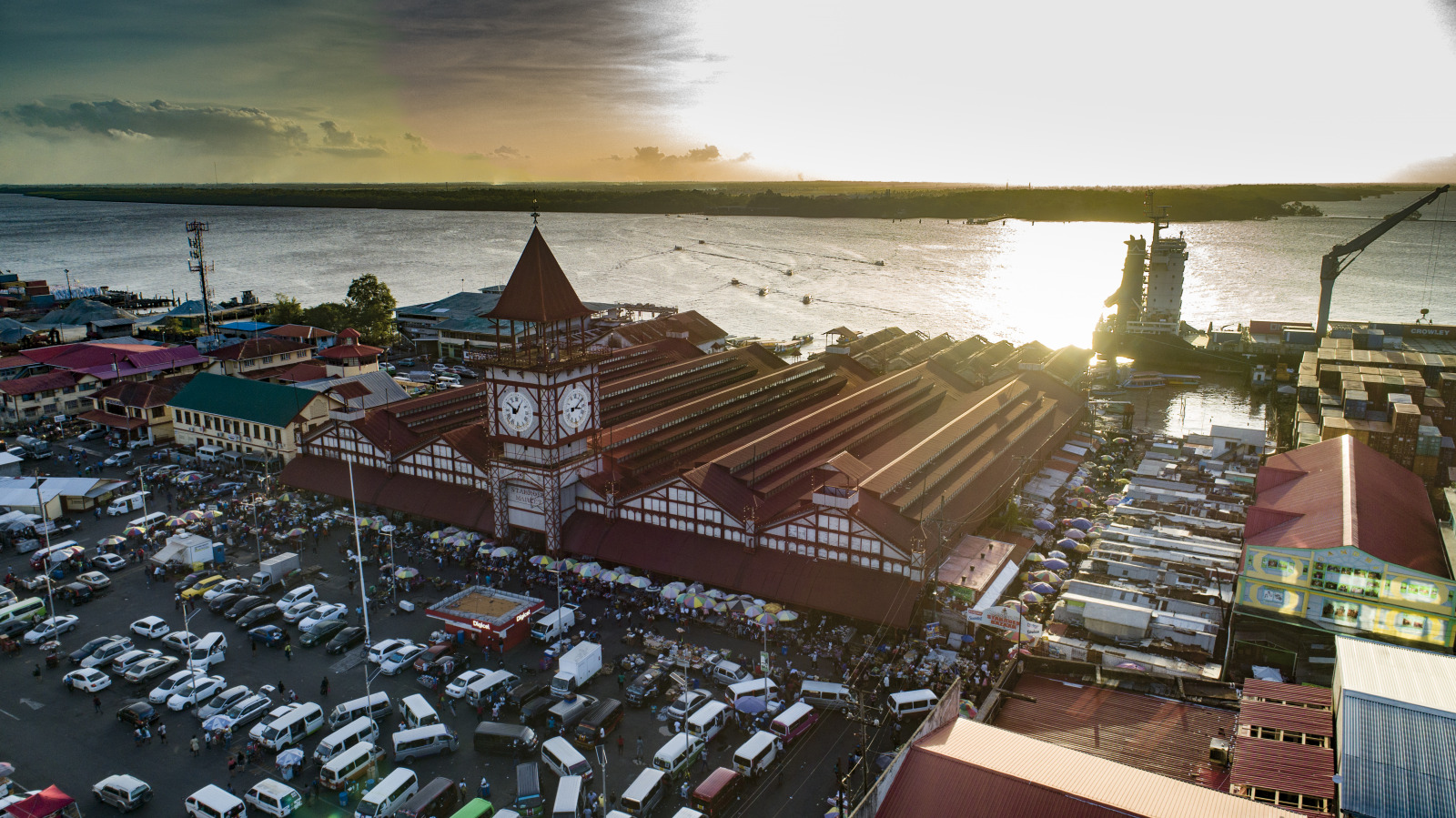 After breakfast we return to the airport and board a flight over the Demerara and Essequibo Rivers and hundreds of kilometres of unbroken rainforest to the remote airstrip at the top of Kaieteur Falls.  The world’s largest single drop falls by volume see the entirety of the Potaro River plummet 226m into the gorge below. We have around two-hours to view the falls before returning to Georgetown in the evening. Overnight Grand Coastal Hotel or similar. (B)

Please note: On occasion the visit to Kaieteur Falls may need to be re-scheduled. 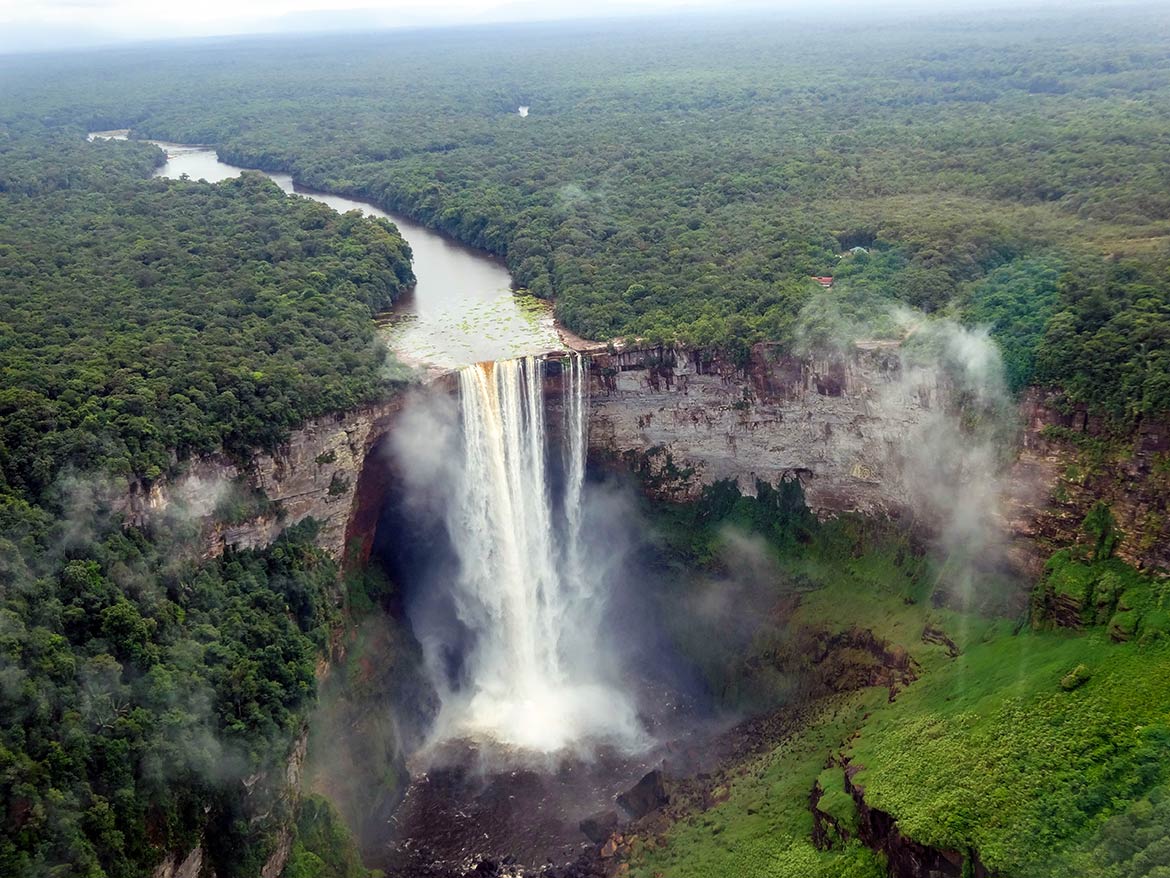 A dawn hike in the foothills of the Pakaraima Mountains, following the Panorama Trail, offers remarkable views across the savannah. After breakfast we travel south to Ginep Landing and take a boat on the Rupunini River to Karanambu Lodge. The lodge was established by the late Diane McTurk, renowned for her research on giant river otters. Later, towards the evening, we return to the river searching for otters and other species. As dusk falls we cruise to riverine ponds where giant amazonia regis water lily blooms at this time of day. Returning to the lodge, we use a spotlight to search for black caiman and other nocturnal species. Overnight Karanambu Lodge. (BLD)

Please note: It is important to read the notes on luggage under ‘Preparing for your Tour’ 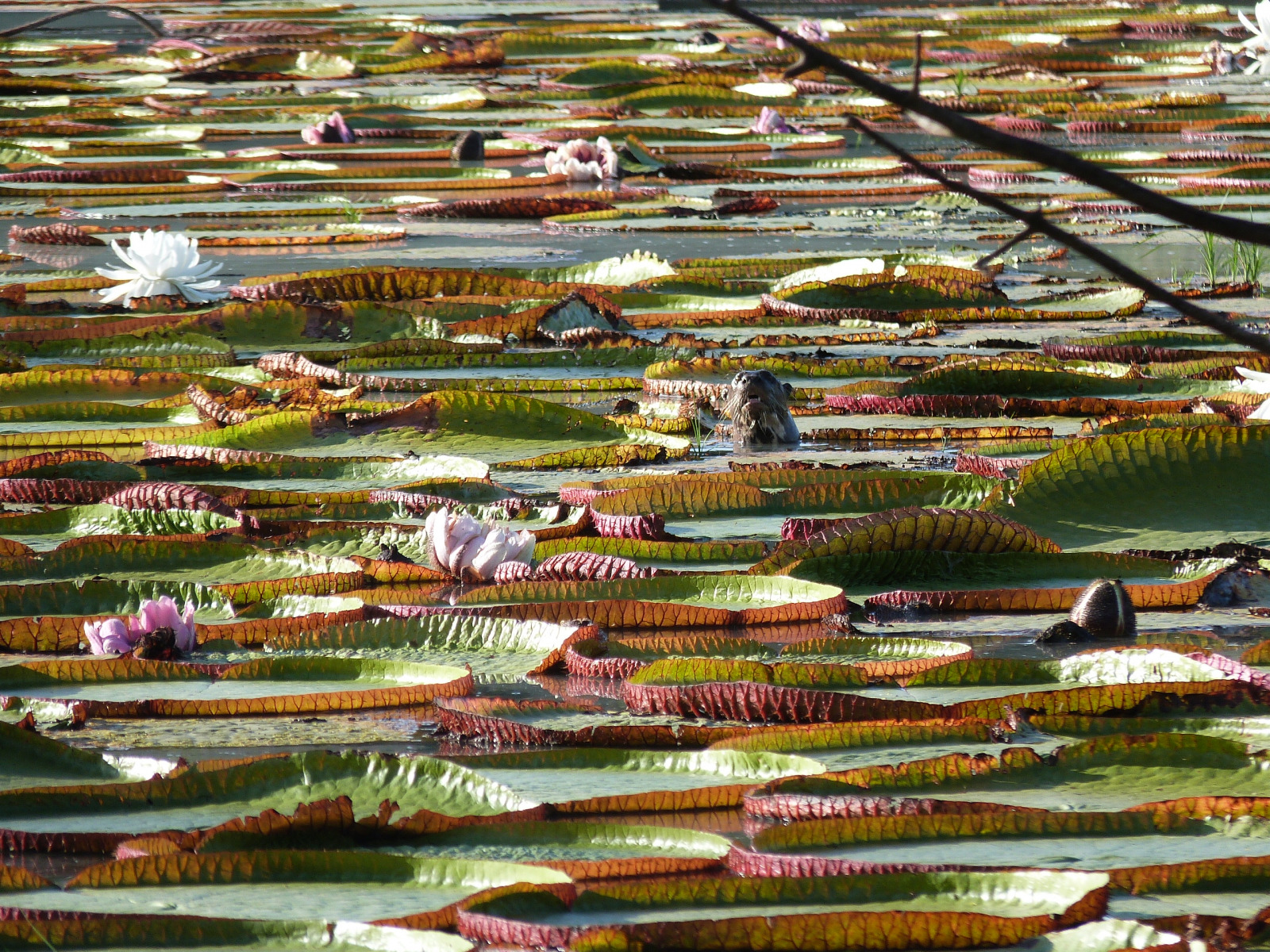 This morning we travel to an area of rolling grassland, home to a population of giant anteaters, where there’s a good chance of seeing these strange-looking creatures. In the afternoon we explore the riverbanks and observe the rich avian life, in the evening walking to the airstrip in search of some of the seven species of night jar known to inhabit the area. Overnight at Karanambu Lodge. (BLD)

This morning we take a leisurely boat journey along the Rupununi River back to Ginep Landing from where we drive to the Amerindian village of Surama. Here we take a tour through the village to learn about the local way of life, visiting the school, the medical centre, the church and some of the village houses. In the evening there’s a guided forest walk in search of nocturnal wildlife before retiring to the village’s basic lodge accommodation. Overnight Surama Eco-Lodge. (BLD)

Rising before dawn, we walk across the savannah in the cool morning air to climb Surama Mountain. Though not a technical climb the ascent can be demanding, and for those who prefer, alternative activities are available with local guides. After lunch at the village, we walk the five kilometres to Burro Burro River for a canoe trip where we hope to see giant river otter, tapir and spider monkey. Overnight Surama Eco Lodge. (BLD) 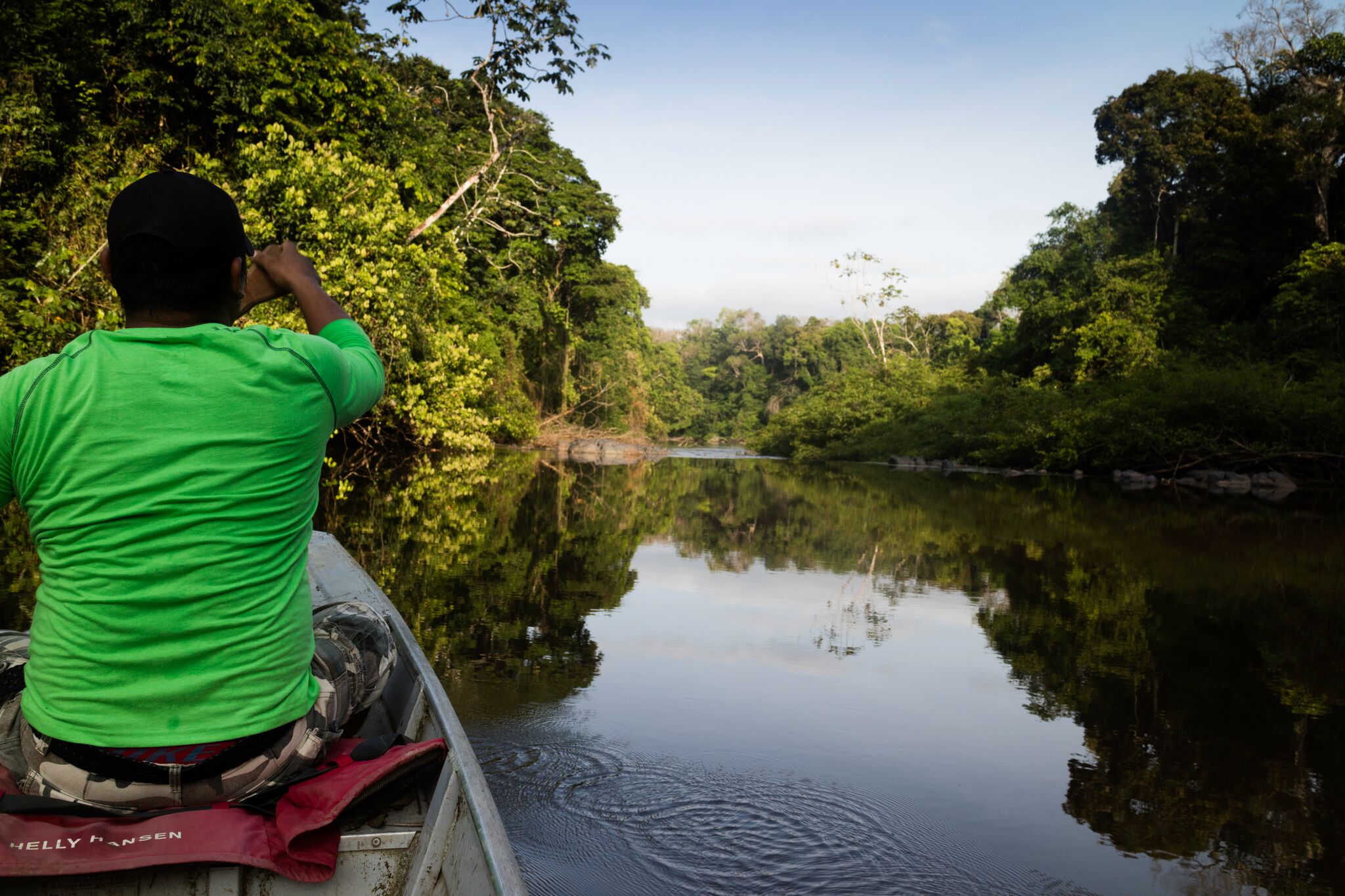 Today we leave Surama, driving through the edge of the forest and taking a trail where there’s a chance to see the one of Guyana’s spectacular cock-of-the-rock. We continue to the 33m-high Iwokrama Canopy Walkway for a different perspective on the forest. On arrival at Atta Lodge we’ll explore the surrounding forest in search of crimson fruit crow and black curassow. Overnight Atta Rainforest Lodge. (BLD) 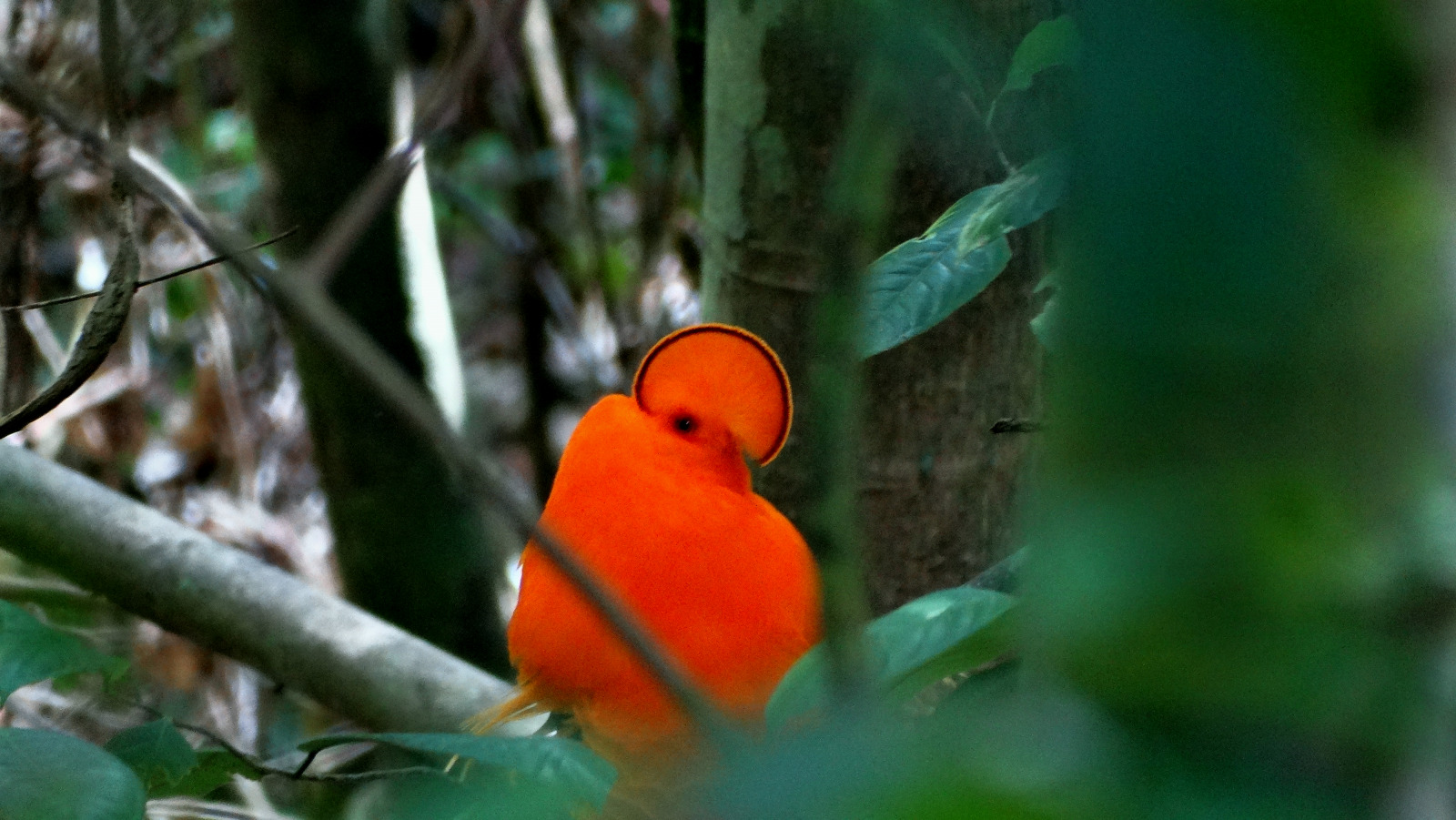 Our day starts listening to the sounds of dawn chorus from the canopy walkway, looking out for red howler and black spider monkey. Afterwards we drive along one of the area’s best trails for jaguar sightings. Though never guaranteed, if we’re lucky we’ll see Guyana’s most elusive carnivore. From the airstrip at Lethem we board a flight back to Georgetown, on arrival taking a city tour of the capital, visiting St George’s Cathedral, Stabroek Market, the Botanical Gardens and zoo. Overnight Grand Costal Inn or similar. (B) 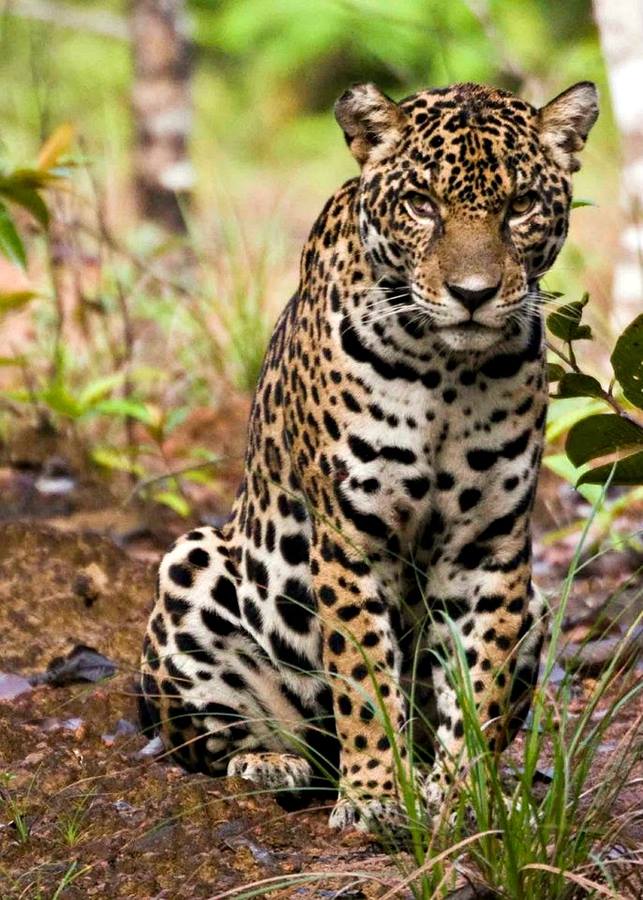 This morning we board a flight to Paramaribo, capital of neighbouring Suriname, on arrival transferring to hotel accommodation. Later, we take a walking tour of the city, a UNESCO World Heritage Site, admiring notable architecture and exploring busy markets. In the afternoon, towards sunset, we head to the pier and join a cruise in search of freshwater dolphins, which are often spotted in pods of up to twenty. Overnight Eco-Resort Inn or similar. (B) 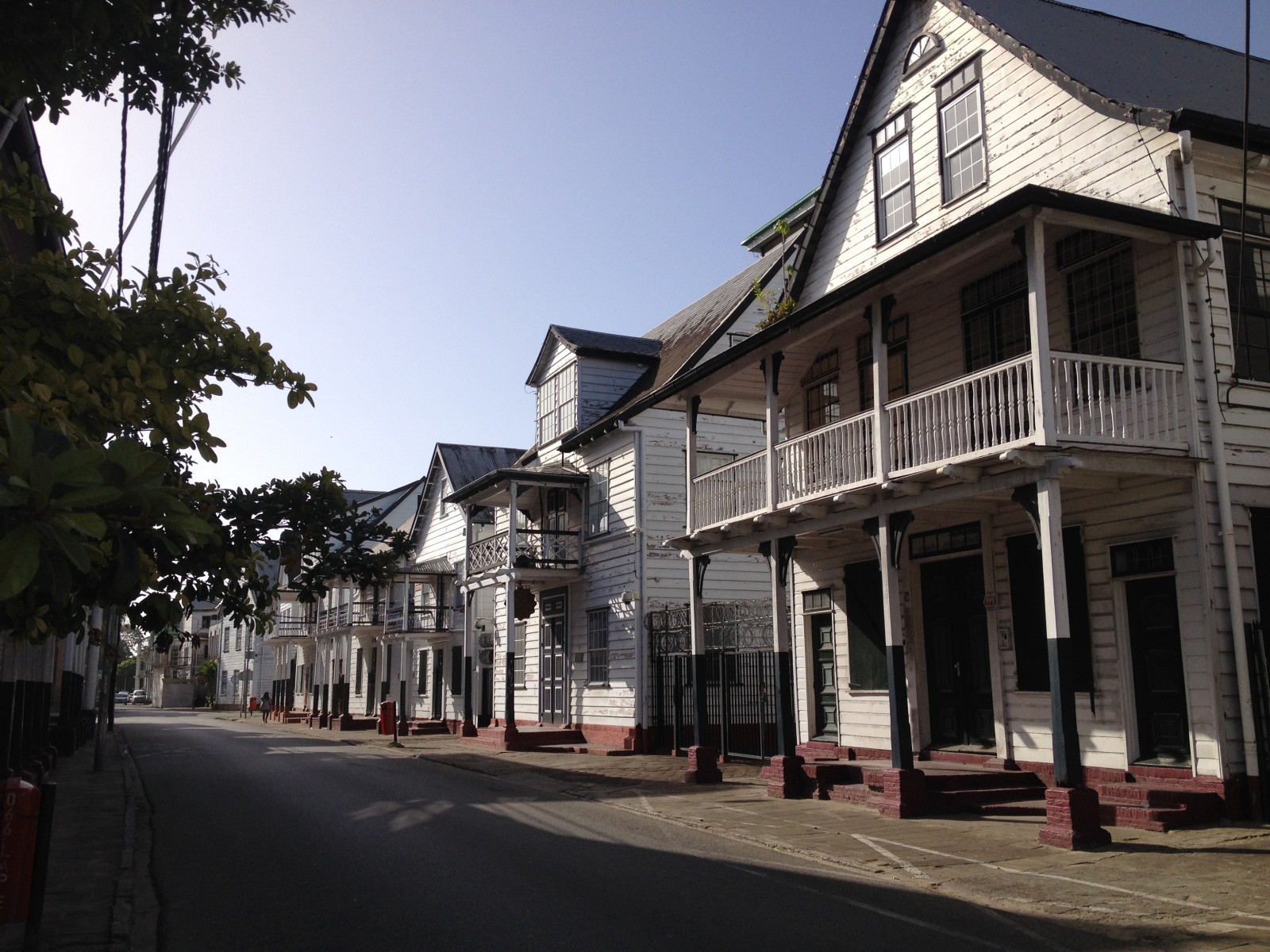 Today we drive south from Paramaribo to Atjoni, boarding a motorised canoe to travel along the upper Suriname River and Danpaati River Lodge. We pass the villages of Maroons, people of African heritage, while traversing remarkable forest landscapes. The lodge is situated on an island in the middle of the rainforest. On arrival there’s time to swim in the pool or the river or just relax in the forest environment. In the evening we head out on the river again in search of caiman lying on the banks. Overnight Danpaati River Lodge or similar. (BLD)

Today we will visit one of the twelve villages affiliated with Danpaati to learn about the history and customs the Maroon people. In the afternoon we take a guided walk to discover the medicinal uses of forest plants. The rest of the day is free to relax, perhaps taking a dugout canoe around the island or even borrowing a rod for some fishing. Overnight Danpaati River Lodge. (BLD)

This morning is free to relax until lunchtime when we depart by motorised canoe for Atjoni, returning by road to Paramaribo. Overnight Eco-Resort Inn or similar. (BL)

After breakfast we drive east of Paramaribo across the Suriname River to the Commewijne district. The route passes through former colonial plantations, most of which are now abandoned. At Peperpot Plantation many of the old 19th century structures are preserved, including the coffee and cocoa factories, the deputy-director’s house and administrative office. The plantation is one of the oldest in Suriname, established by the English before Suriname was conquered by the Dutch in the mid-17th century. Afterwards we travel to Marienburg, a former sugar plantation, where we visit the museum before taking lunch in nearby Tamanredjo. Later we continue to the confluence of the Commewijne and Suriname Rivers at Nieuw Amsterdam. Here we visit the outdoor museum of Fort Nieuw Amsterdam, a large fortress built to defend the upper reaches of both rivers. Overnight at Eco-Resort Inn. (BL)

Today the tour ends after breakfast when airport transfers depart to meet onward flights. (B)

Please note that the deposit requirement for this tour is £1215 per person.

Please note that tour dates in 2023 are still provisional and may change by a few days.

Flights from London to Georgetown, returning from Paramaribo, start from around £1100 per person. Please contact us for a quotation.

Single supplement is from £255.

This group tour operates subject to a minimum group size of 2 travellers.

You will need proof of Yellow Fever immunisation when entering Suriname from Guyana. 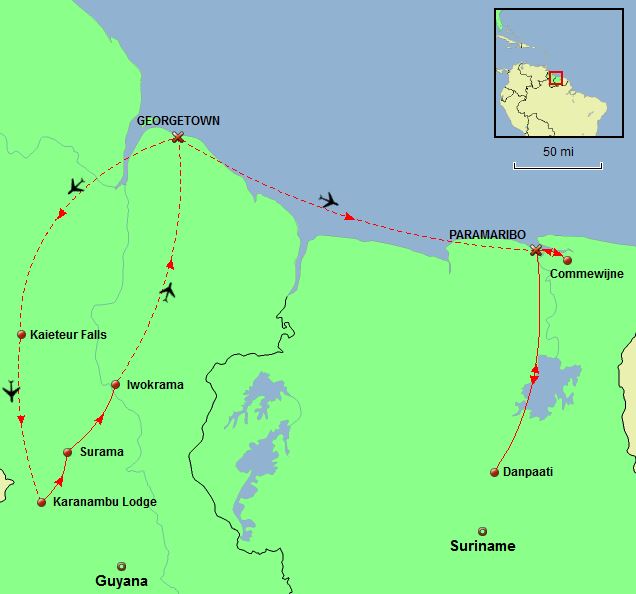 A very enjoyable time. The trip was REALLY GREAT. All of the guides were excellent. Gary in Samara Village was exceptional.