Explore West Africa’s most welcoming nation. Join us on this small group adventure as we discover remote villages with strong ancestral traditions and learn about the Ashanti kingdom at Kumasi.

We visit the home of sacred monkeys and learn about the tragic history of this part of Africa in the slave castle at Elmina.

A fascinating journey through an enchanting country.

Stretching from the dusty borderlands of the north to the tropical coast in the south, Ghana encapsulates all that is special about West Africa, with great scenery and wildlife complemented by a joyous and exuberant people who will make you feel welcome from the moment you arrive.

On this tour you will meet the Ashanti. The Ashanti people were one of the most powerful nations in Africa until the end of the 19th century. Originally from the northern savannah regions, the Ashanti people migrated south, carving farms out of the wild rainforest. The region was rich in gold, and trade in this precious metal developed quickly, with small tribal states developing and vying for control of resources. In the late 17th century the Ashanti ruler brought these states together in a loose confederation and the Ashanti Kingdom was born. Their social organisation is centred on the Ashantehene figure, the king of all the Ashanti. The Ashanti are the lords of the gold, so they adorn themselves in it during ceremonies. The Ashanti Kingdom was famed for its gold, royalty, ceremony and the development of a bureaucratic judicial system.

Ghana is vibrant and seductive, and it’s no wonder that it’s many people’s introduction to West Africa. Ghana is the sort of place that remains in your soul long after you have visited.

Arrive in Accra and transfer to your hotel. Depending on your time of arrival, there may be time to explore this vibrant African capital. Overnight at La Villa Boutique or similar.

After breakfast we explore the city, taking in the atmospheric old quarter of Jamestown, the National Museum (subject to ongoing renovations) and the bizarre world of the capital’s coffin makers. These skilled craftsmen build elaborate coffins in weird and wonderful shapes, including fish, cars, animals and even aeroplanes. Having considered the manner of our final journey, we then drive west to the coastal town of Anomabu. Overnight at Anomabu Beach Resort or similar (BLD)

This morning we head deep into the forests of Kakum National Park and explore a remarkable 350m canopy walkway, connecting seven treetops, allowing views of wildlife in a habitat that’s normally impossible to observe. Afterwards, we visit the fishing town of Elmina, best known for St George’s Castle, the oldest European building in Africa built as a holding centre for slaves. Elsewhere, in the towns old quarter, we see unique Posuban shrines, erected by traditional ‘asafo’ societies once responsible for local defence. Overnight at Abomabu Beach Resort or similar (BLD)

Kumasi is Ghana’s second city, and the centre of the historic Ashanti kingdom. Here, we visit recently renovated traditional Ashanti houses, famous for their unique decorations. With luck (though not everyone’s) it’s possible we may also witness an Ashanti funeral – a colourful and exuberant affair providing insights into the complex culture of a once powerful kingdom. Overnight at Hotel Miklin or similar. (BLD)

Today we visit Kumasi’s Royal Palace Museum, notable for its extensive collection of golden jewellery. A further highlight this morning is the Akwasidae Festival, an important traditional celebration in the Ashanti calendar. The festival commemorates the ancestors and occurs once every nine weeks marking events in the farming year. Later, we drive to Techiman. Overnight at Encom Hotel or similar. (BLD)

Today we travel to Mole, the largest, oldest and most developed park in Ghana. En route we stop and visit some local villages. Overnight Mole Motel or similar (BLD)

Today we take a walking safari in Mole National Park. The vegetation is savannah woodland with gallery forest along watercourses. 734 species of flowering plants have been recorded in the park. 90 mammalian species including elephant, buffalo, roan, kob, hartebeest, water buck, reed buck and other antelopes.

Among the estimated 500 elephants found at the Mole National Park are three relatively “tame” individuals.

Because of the good protection given to animals in the park, the elephant have generally become used to visitors and allow them to get close during the guided tours. Overnight Mole Motel or similar (BLD)

Today we visit the Dagomba villages, a tribe that represents one eighth of the Ghanaian population. Their villages are made of round huts covered with high thatch roofs. Overnight Kamil Legacy Hotel or similar (BLD)

Today we stop at a Kokomba village and are welcomed by women who bear the unfortunate burden of being considered ‘witches’. Overnight at Gateway Hotel or similar. (BLD)

Travelling from savannah to tropical forests, along the way we stop at coffee and cocoa plantations. Here too, on the border between Ghana and Togo, we visit the beautiful 80m Wli waterfalls – the highest in West Africa. Overnight at Wli Water Highs Hotel or similar. (BLD)

The walk to Wli waterfalls is approx. 45 minutes following a flat path.

Today we drive to the Volta region of Ghana and visit the Monkey Sanctuary of Tafi Atome. We take a walk in the forest to see the Monas and Colobus monkeys. We then follow a winding road to the village of Akosombo. Overnight Afrikiko Resort or similar (BLD)

Today we attend a Voodoo ceremony at the heart of a remote village. During the ceremony some of the adepts may become possessed giving rise to amazing trances. Overnight Afrikiko Resort or similar (BLD)

This morning travel to Krobo, famous for its beads, where we visit a factory specialised in the production of the beads. We then drive to Accra for an overnight stay. Overnight La Villa Boutique or similar (BLD)

Today we focus on the very modern soul of Accra. We will visit some art galleries like Artists Alliance Gallery, Wild Gecko Handicrafts and Gallery 1957. Stroll around the design and cloths shops hopefully having the chance to meet some designers who could explain us their works. You will then be transferred to the airport for your departure flight. Day use rooms available until 1800hrs. (BL)

We are running an incredible and unique 10-day tour for the Dipo celebrations, from 30 April to 9 May 2022.

Also note the possibility to extend your trip with a 5-day post tour extension to the Mole National Park. The extension is £2,245 per person, and the single supplement is £495.

Please contact us to receive the itinerary and full details for this special departure and extension, both GUARANTEED.

Please note that on this tour the maximum group size is 16.

You are likely to be joined by travellers from companies other than Undiscovered Destinations, with a mix of nationalities.

Flights from London to Accra start from £450. Please contact us for details.

We include airport transfers in the price of your tour if you are arriving on the first day and leaving on the last day of the advertised itinerary. These will be provided by our local representative or on occasions by the hotel used for the first and last nights of the tour. When the transfer is provided by the hotel this will often be via a shared shuttle bus operated by the hotel. If you are planning to arrive before the start date, and/or leave after the end date of the tour, Undiscovered Destinations can arrange private transfers at an additional cost. Please check with us at the time of booking. 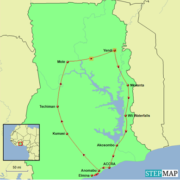 An interesting trip. The wonderful people of West Africa were the highlight. Very helpful and knowledgeable guide.

Read more about Ghana and our West African tours