Mark Huggins from Undiscovered Destinations has recently returned from a trip to Tusheti in Georgia where he explored this wild region. Read about his travel in Georgia below.

Exploring the Tusheti in Georgia

I continue with my guide and driver for around 2 hours east of the capital to the charming fortified hill top town of Sighnaghi, overlooking the Alazani Valley. Visitors will delight in the superb views towards the Greater Caucasus Range, as well as the genteel 18th and 19th century architecture.

I continue through the sun-kissed vines of the Alazani Valley to the impressive Cathedral of St George at Alaverdi. The church dates from the 11th century, and has endured centuries as an extremely important pilgrimage site. It is notable for impressive frescoes, uncovered quite recently after being indiscriminately whitewashed by the Russians in the 19th century.

The church is probably most notable for its towering dome, measuring 50m, one of the highest in Georgia. This is not only an impressive building; it’s also an attractive location, set amongst its own vineyard and a panorama of the primary focus of my trip, the Greater Caucasus Range and the region of Tusheti in Georgia.

A final interesting and enjoyable excursion of the day is to visit a local farmer, additionally masquerading as a winemaker and folk singer. My host Giorgio is a striking man with a handshake that could possibly reduce rocks to mere particles! He guides me around his land of apple and walnut trees whilst telling me effusively about his late father.

It is then time to sample his ‘cha cha’ a fearsome home-made spirit, liberally consumed at any meaningful Georgian social occasion. He explains the process of the production of ‘cha cha’ and we indulge with homemade bread and pieces of delicious salted ham.

After numerous toasts, as is tradition in Georgia, it is time to leave, but not without a complimentary bottle of ‘cha cha’ and a signed CD of Giorgi and his band of folk singers – comprising of his son and his mates! Not what was I was expecting but I gladly accept the gesture. 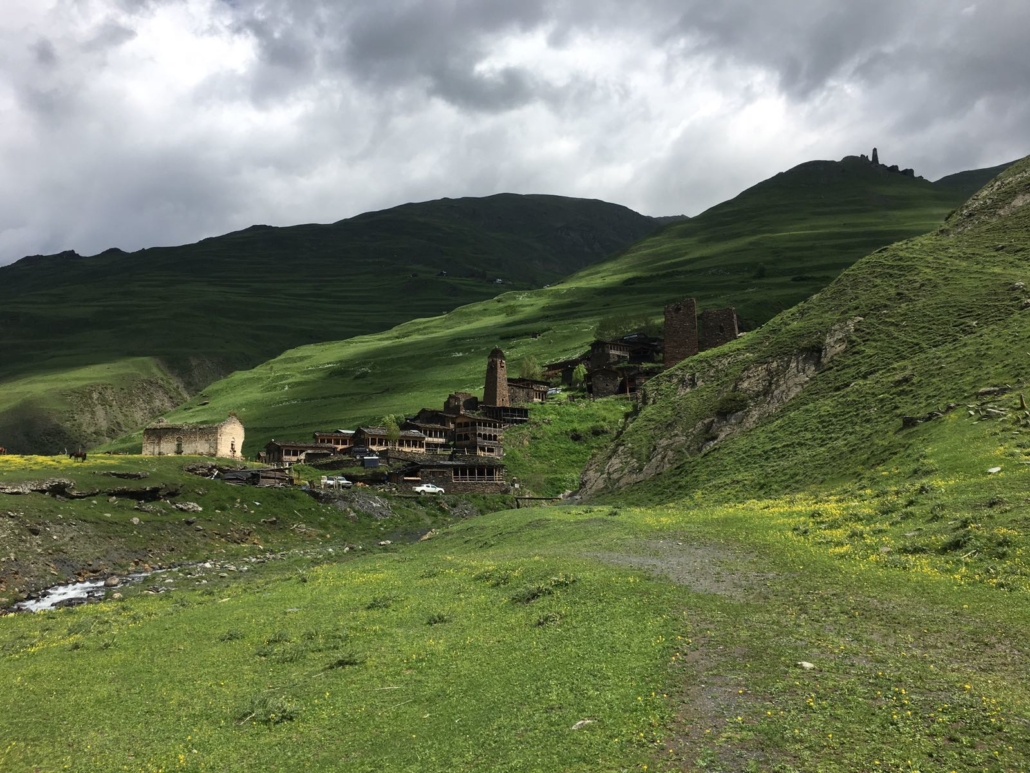 An early start, and with huge anticipation it is time to journey into the wild. Leaving the Alazani Valley, a notice board clearly tells us the road to Tusheti is closed, but my driver is confident this is an old sign and we continue unabashed.

Almost immediately, as we gain height, the surrounds are enchanting, with rushing torrents carving through gorges and gleaming waterfalls tumbling off cliffs. The forest too is wonderful, verdant and age-old, teeming with birdlife. The climb continues for around 3-4 hours of dizzying hairpins and sheer drop-offs into the abyss.

My driver seems unfazed and the glorious overheads give me confidence of safe passage.

Eventually, the near 3000m Abano Pass reveals itself and we stop just below so I can walk over it in the rarefied mountain air. Snow is still omnipresent, and just below the pass we drive through a thrilling ice cliff passage and across streams and small rivers of melting snow. Another delightful feature is that of wildflowers everywhere, a kaleidoscope of colour carpeting the slopes.

After a thrilling journey we arrive in the first valley of Tusheti and a grandiose meadow spreads out before us, again liberally painted with wildflowers. The immediacy of the scene is breathtaking, with 4500 metre snow-clad peaks towering, the meadow below serving as if an amphitheatre.

Continuing to Upper Omalo, a number of medieval watchtowers, built to warn of invaders from the Northern Caucasus, reveal themselves. We check in to the comfortable guesthouse and then journey into another stunning valley to the village of Shenako.

The village is dotted with typical Tushetian houses constructed from skilfully laid slate. The star of Shenako is however the beautiful 16th century church, overlooking the soaring peaks of the Caucasus, all set amongst blazing yellow wildflowers. A scene of epic contrasts.

We move on to Diklo, situated a shade below 2000m. The village has a grand entrance with a wide meadow emerging from cool pine forest. The alpine expanse is full of fine looking horses. The Tushetian people are renowned horsemen and it is common to see the men herding cattle and sheep on horseback, flanked by fierce looking Caucasus dogs.

Diklo is merely a stone’s throw from the border with Russia and the region of Chechnya. I am told it is common here to see the Georgian military patrolling the valley. After exploring Diklo we return to Omalo. Our day concludes with a short but steep climb to the watchtowers above Upper Omalo.

As the sun dips, it feels humbling to stand next to these medieval guardians without another tourist in sight. Over a dinner of traditional Khinkali (steamed dumplings with mince inside) I, the driver and my guide share the bottle of cha cha from the farmer yesterday and raise our glasses in front of a roaring fire.

Passionate toasts are vociferously directed towards virtually anyone my guide can think of! To hosts, to wives, to children, to England, to the royal family, to peace, to love, to safe passage; and so it went on…

The next morning conditions are still good. We travel around 1 hour to the Pirikiti Valley and first to the village of Dartlo. On approach to the village from the bridge across the river, one is treated to an outstanding view of Dartlo with its defensive tower and traditional houses.

Perched high and somewhat precariously above Dartlo is an abandoned village, apparently falling victim to an outbreak of plague in the 19th century. After coffee overlooking the magnificent valley, we continue a short distance by car to the village of Jesho where we leave the vehicle and continue on foot through the valley.

The walk is an easy grade, following a dirt track flanking a fast-flowing river. The weather is still splendid, and we are treated to superb scenery, not least the numerous watchtowers that strategically stand sentinel along the valley. The end of old avalanche flows also create ice caves for the river to penetrate.

The sound of the cuckoo resonates from the slopes and luckily I’m treated to a great visual with my binoculars, an all-too-rare sight back home, but they seem abundant here. Soaring at much higher elevations above me are also eagles and possibly Griffon vultures.

The walk takes around an hour and a half until we approach the village of Parsma, overlooked by Mt Tebulos at 4500m. Reaching the village involves a short 10 minute ascent above the valley floor.

Amazingly, we are invited in a local Tush shepherd’s home where we have coffee and eat our picnic lunch. The shepherd joins us to share our lunch, and I enquire about his life in the mountains. He is alone but clearly loves his land and his herd. Etched into his features is the harsh reality of this remote place. We leave him the remnants of our plentiful picnic and thank him for his hospitality.

Our return to the car on foot is a flurry of discussions of all manner of topics and the hilariously singing of our national anthems at the tops of our voices! Back in Dartlo there is time to tackle the ascent to the abandoned village high above us.

After around 40 minutes of solid steep ascent we arrive, and the feeling of solitude is stepped up a few notches. Crumbling old properties stand solemnly, somewhat cheered by the presence of small nesting birds flitting in and out of the skeletal structures to feed their chicks.

The medieval watchtower leans impossibly, surely one small earth tremor – common in these mountains – or a raging rain storm could bring it down. Descending back to Dartlo, I could scarcely imagine living in tougher locations than those which must have existed in the abandoned village.

With many lusty kilometres in the legs, we head back to Omalo for the evening and more hearty Georgian fare.

On the morning of our departure, the notoriously fickle weather has turned. From the balcony of the guesthouse I am greeted by vast swathes of mist and fog and the patter of light rain. We have been fortunate thus far, but this does not look like ideal conditions to traverse the Abano once more. We slowly head up from the Tusheti valley and climb inexorably towards the pass.

The fog is impenetrable and a hush falls as the driver exercises maximum concentration.

Then suddenly we lift out above the gloom to an almost otherworldly scene where a soft carpet of white lies below us with magnificent green and snow spotted slopes either side. Over the vertiginous Abano we go and soon descend back into the mist.

Occasionally out of the gloom the ghostly figure of a shepherd on horseback appears, leading his herd over the pass. The driver expertly and effortlessly navigates the hairpins and returns us safely back to the valley, which is thankfully fog free, and takes us a leisurely further 2 hours back to Tbilisi.

It is hard to do Tusheti in Georgia justice without cliché. Many superlatives come to mind. But nothing sounds more apt to me than simply wild.

Mark Huggins travelled to  Tusheti in Georgia in June 2018. You can visit Tusheti with Undiscovered Destinations as an extension to our ‘Georgia Small Group Tour’.

Alternatively, our ‘Peaks and Valleys of the Caucasus’ tour also features Tusheti, as well as the Greater Caucasus region of Svaneti.

Undiscovered Destinations can also provide private and tailored tours to Tusheti and the greats Caucasus region.