Discover Authentic Arabia on a Tour of Oman

Home > Blog > Discover Authentic Arabia on a Tour of Oman

An Arabian tour of Oman

Undiscovered Destinations travel consultant Rhia taks a tour of Oman to discover the real Arabia. ‘Before taking this tour of Oman, I have to admit I knew very little about the country. Everyone I told thought I was crazy visiting the Middle East, especially a country which is unknown to many people.’

My tour of Oman

Landing in Muscat and passing through immigration and baggage collection was a quick and easy process – I was sitting in the car heading to my hotel no more than 20 minutes after landing!

This was my first time in the Middle East (except for Dubai airport) and I was taken aback by the cleanliness of Muscat. The main roads are lined with palm trees, which my driver informs me are date-palms, with neat grassy areas alongside white buildings.

The Al Falaj hotel is only 25 minutes from the airport, and after meeting my guide Said, I head to my room for an early night in preparation of a busy week ahead.

The next morning, we set off early to visit Sultan Qaboos Grand Mosque. The guards outside are very strict to ensure you adhere to the dress code; women must cover their hair, arms and legs, but this is more relaxed for men. The Grand Mosque is the largest in the Middle East, and the only mosque with 5 minarets, all others only have one. Although spectacular from the outside, it is breath-takingly beautiful inside. 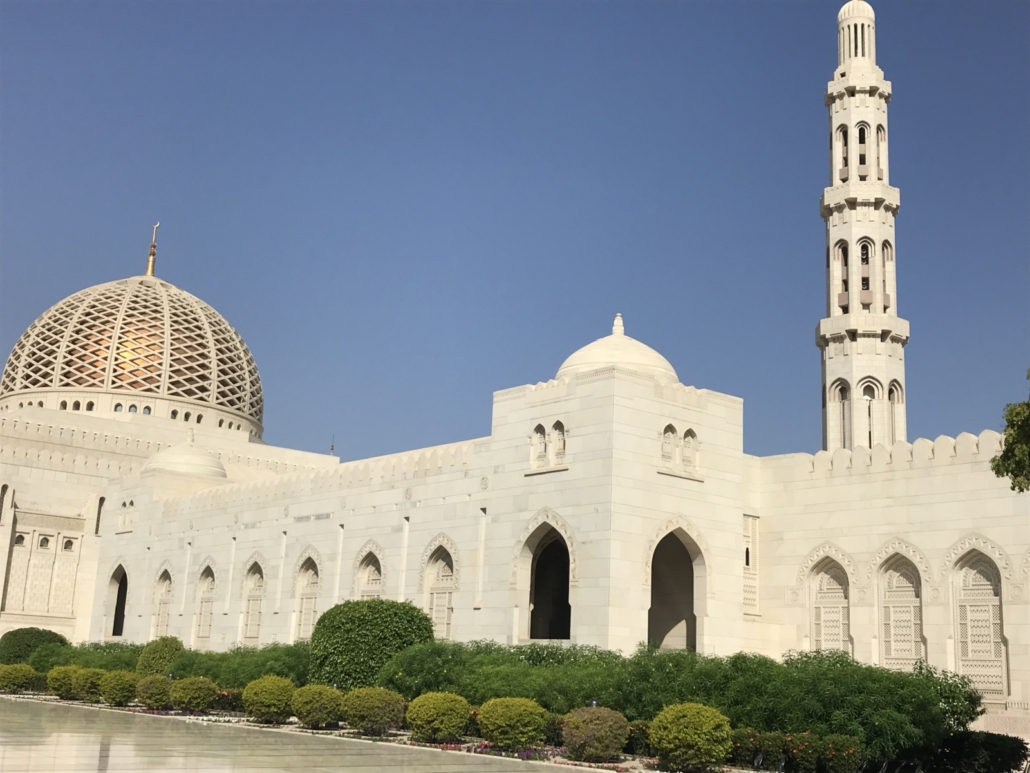 The architecture is traditional Omani style, but the main feature is the carpet in the prayer hall. It was handmade in Iran and took around 4 years to make! After an hour or so at the mosque, we head out of Muscat towards Ras Al Jinz.

Just outside Muscat we stop at Bimmah sinkhole, which locals believe was created by a meteorite, and then we stop at a tranquil white-sand beach, Wadi Shab and Wadi Tiwi, before continuing to Ras Al Jinz Turtle Reserve. In the evening we take a short walk in the reserve to look for green turtles who have come ashore to lay their eggs.

We were a lucky group – we saw two different turtles making their nest, one heading back to the sea and baby turtles taking their first steps to the sea! This was one of my highlights on this trip, and it was only the second day!

Several of us decided to visit the turtle reserve again in the morning as it was promised to be a different experience to the previous night, and you can watch the sunrise on the beach. Again we were blessed with several sightings – some making their nest and burying their eggs, one heading back to the sea and even more baby turtles.

After a glorious sunrise and exciting morning with the green turtles, we left Ras Al Jinz to Sur, known for its dhow shipbuilding. We visit a dhow shipyard before heading to one of the most beautiful wadis in Oman – Wadi Bani Khalid – where we stay for a couple of hours for swimming and a local lunch.

Our journey then took us into the desert towards Wahiba Sands. Before arriving at our camp, we visited a local Bedouin family for tea and learn about their way of life before watching another spectacular sunset on top of a sand dune.

At the halfway point of the tour, we spent a day at leisure at 1000 Nights Camp. They offer several different excursions, such as camel rides and dune bashing, or you can take a walk up the sand dunes or relax by the pool. If you do want to do any of the excursions it is a good idea to book in advance.

Our next destination on our tour of Oman was Nizwa. We leave the desert by some expert driving from our guide and visit the old houses of Ibra. These used to belong to wealthy merchants but are now no longer inhabited, and have crumbled to the ground.

We make a brief stop at Al Aya village to see the rice terraces before arriving in Nizwa for our overnight stay. Friday morning is when the weekly animal market is held, where locals travel to Nizwa to buy and sell livestock including camels, cows, goats and sheep.

We walk through Nizwa Souq to the famous Nizwa Fort, only 5 minutes from the lively animal market. We continue to Jabrin Castle which feels more like a palace than a fort built for protection with its colourful ceilings and décor. It also contains the burial site of the Imam.

As Friday is the start of the weekend in Oman, this morning was very busy to make sure everything could be included, but there is plenty of time to explore these magnificent forts. After lunch we head into the mountains to take a (rather frightening) walk along a mountain path – just don’t look down if you’re afraid of heights.

After about a 30 minute walk we were blessed with amazing views over the mountains. We head to the Jebel Shams Resort where our rooms face the direction of the sunset, which we watch from the comfort of our room.

Our last full day in Oman is a long drive back to Muscat, passing through ‘Snake Gorge’ in the middle of the mountain cliffs. Said tries to make us believe it is so named because of the many snakes found there, however he fails as we already know it is named because it the gorge is shaped like a snake through the mountains.

After a long and bumpy drive, we arrive back at the Al Falaj in Muscat.

The next morning we visit the fish and vegetable markets as well as trying our hand at haggling at Mutrah Souq. Our last afternoon in Muscat is spent on a sunset cruise, which is a wonderful relaxing end to such a busy week!

My tour of Oman is not quite over, as I head to the airport for my short flight to Salalah in the south. My first impression of Salalah was that it reminded me of a promenade somewhere in Europe, with palm trees and streetlights lining the roads.

The hotel I was staying in was 20km outside of the town and as it was late, I was happy to climb into bed, hoping that the phrase ‘don’t judge a book by its cover’ rang true about Salalah.

I meet my guide at the hotel the following morning and we set off on our tour of the Dhofar Region. The first stop is Taqa to see its fort, which is smaller than those at Nizwa but nevertheless impressive. We then head to the archaeological site of Sumhuram, which controlled the frankincense trade route. No one quite knows how it got its name, but it is known to many as the Queen of Sheba’s palace.

Next, we drove into the mountains to Wadi Mir Bat and took a very peaceful boat ride on the water. It was quite an experience, especially being sat right in front of the many camels that were crossing the water at the time!

Unfortunately, this is not included in our Salalah Extension itinerary, as the Wadi is not always full with water. After a local lunch we visited the Tomb of Prophet Job. The tomb itself was painted green to represent heaven, and you must remove your shoes and women must cover their head before entering.

Our last stop in the Dhofar region was Al Mughsayl beach with its blowholes, which is said to be a fantastic experience, although in the daytime heat you don’t see the full effect.

On my second day in Salalah, my guide took me to one of the most inhospitable places on the plant, the Rub Al Khali Desert, or the Empty Quarter, where the legendary ancient kingdom of Ubar was said to be. After about a 3 hour drive we reached the desert, and my guide drove as far up the sand dunes as possible – which, with some impressive control and driving, was pretty much at the top.

The empty quarter is completely barren and different colour to Wahiba Sands, and I felt like I was on top of the world, even just for a moment. My guide then took me to Wubar Archaeological Site to see the excavation of this ancient city that was swallowed by the sand. Although there was a lot of driving today, it was fascinating to see this side of Oman.

My final day in Salalah and of my tour of Oman, was spent exploring the town itself. We visited the mosque, which can hold a lot of people despite its small appearance, as well as the Frankincense Land Museum which explains the history of the ancient frankincense trail and Oman’s marine history, and then walked around the souq to search for the purest frankincense my guide could find!

Oman does not deserve the hostile perceptions; it is one of the most peaceful and welcoming countries I have ever experienced.

If you would like to join Undiscovered Destinations tour of Oman, the ‘From the Desert to the Coast’  is an 8-day group tour. We also offer private holidays and tailor-made departures.

GO TO BLOG
The Forgotten Cities on the Silk Road Tour

It was wonderful to travel through Japan
Scroll to top