After the annual rains, the nomadic Mbororo people gather for a unique celebration known as the Gerewol. This is a festival full of colour and has to be considered one of the most off the beaten track and fascinating cultural experiences in the whole of Africa.

We will feel privileged to be able to travel to the remote region of Durbali to see the age old traditions of the Mbororo and join them as they celebrate the Gerewol Festival by feasting, singing, dancing and engaging in courtship. In particular, a real highlight is to witness the spectacular way in which the young Mbororo men decorate themselves with make-up and jewellery to impress a prospective partner.

During our days at the festival we will immerse ourselves in the local traditions on what is sure to be a truly unique memorable African experience.

On this tour to the Gerewol Festival we will be meeting the Mbororo people. The Mbororo belong to the Fulani ethnic group (a distinction typically being made between the Mbororo and the Peul, who tend to live more settled lives), and are traditionally nomadic cattle-herders and traders in the Sahel, migrating between Chad, southern Niger, through northern Nigeria, north-eastern Cameroon, and the western region of the Central African Republic.

Their lives are centred on the herds of long-horned Zebu cattle, and they migrate according to the seasons to find pasture. Groups of several dozen relatives, typically several brothers with their wives, children and elders, travel on foot, donkey or camel, and stay at each grazing spot for a couple of days.

The Mbororo are very traditional; women plait their hair and often wear silver coins or discs into their hair, and sometimes have tattooed faces. The code of behaviour of the Mbororo emphasizes reserve and modesty (semteende), patience and fortitude (munyal), care and forethought (hakkilo), and loyalty (amana). They also place great emphasis on beauty and charm. Parents are not allowed to talk directly to their two first born children, who will often be cared for by their grandparents. During daylight, husband and wife cannot hold hands or speak in a personal manner with each other.

The Mbororo are largely but loosely Islamic. Although there are varying degrees of orthodoxy exhibited, most adhere to at least some of the basic requirements of the religion. Islam became important among Mbororo peoples during the 16th century when the scholar al-Maghili preached the teachings of Muhammad to the elite of northern Nigeria. Al-Maghili was responsible for converting the ruling classes among Hausa, Fulani, and Tuareg peoples in the region.

Arrive in N’Djamena and transfer to hotel accommodation. Rooms are available for those arriving in the early morning. Relax for the rest of the day or explore the city. Overnight Mercure Hotel or similar. 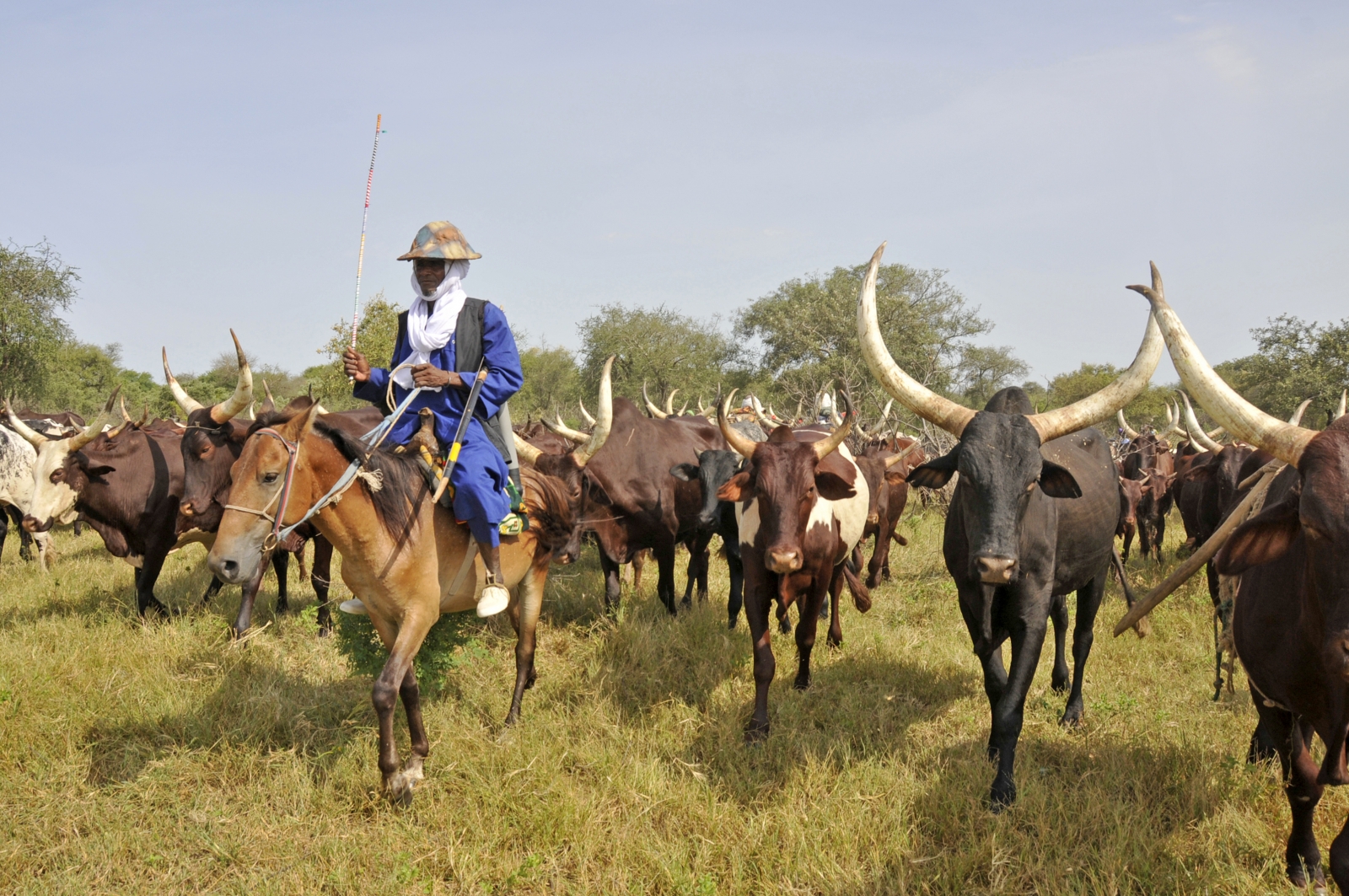 Leave the capital and drive through the Sahel to the Durbali region where we join the Mbororo people in their celebration of the Gerewol festival. Overnight camping. (BLD) 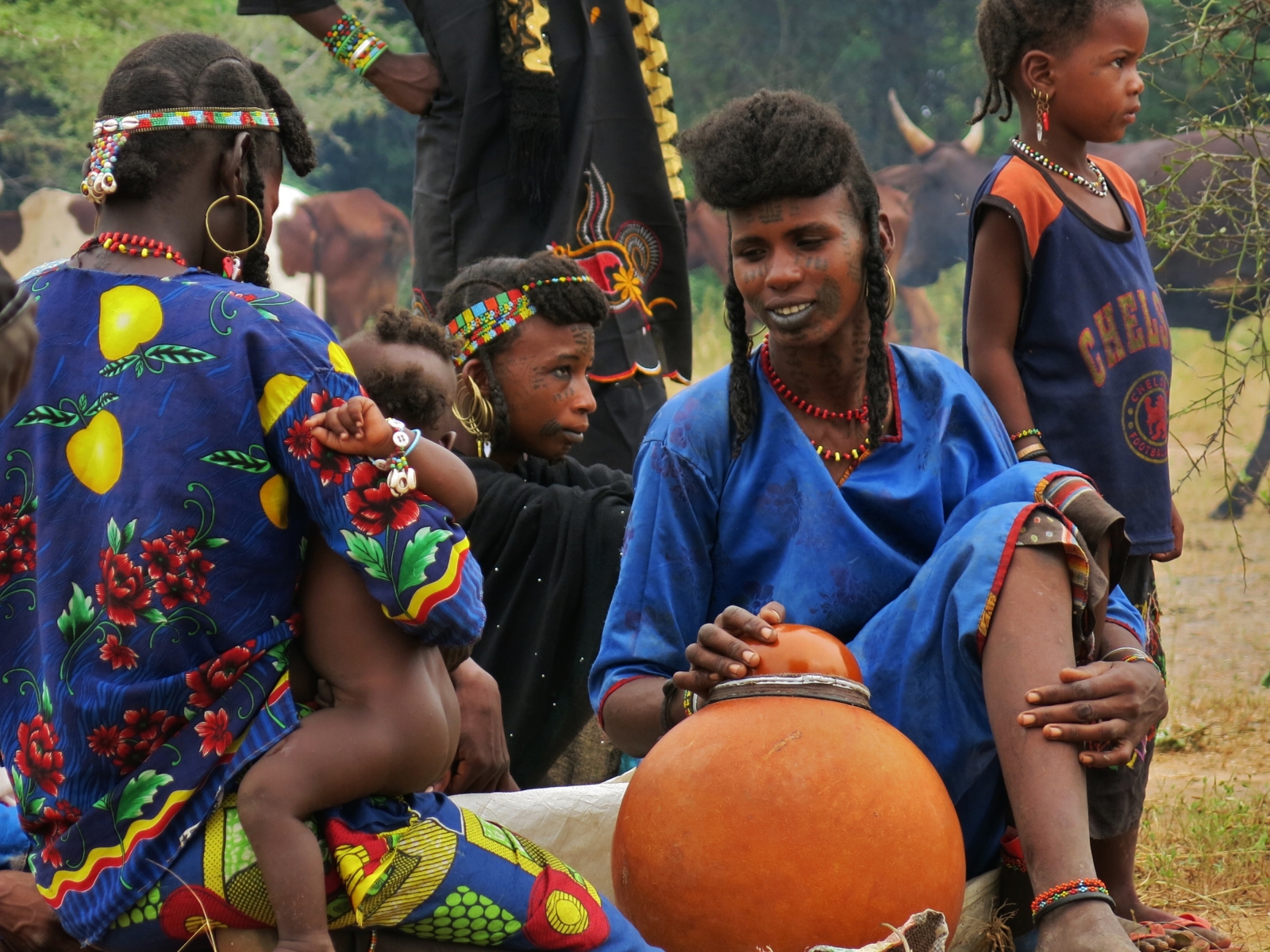 Truly one of Africa’s most unusual cultural events, the rituals and ceremonies associated with the Mbororo’s Gerewol festival have remained unchanged for centuries. Young Mbororo men decorate themselves with makeup, feathers and traditional jewellery to display to young women; the Gerewol is an elaborate mass courtship ritual and a fascinating spectacle to observe. As well the main event we can expect to see traditional singing and dancing, and even camel racing. Beyond the festival there’s time to explore the market of Durbali, one of the most important in the Sahel, and spend time with local people to learn aspects of their unique culture. Overnight camping. (BLD) 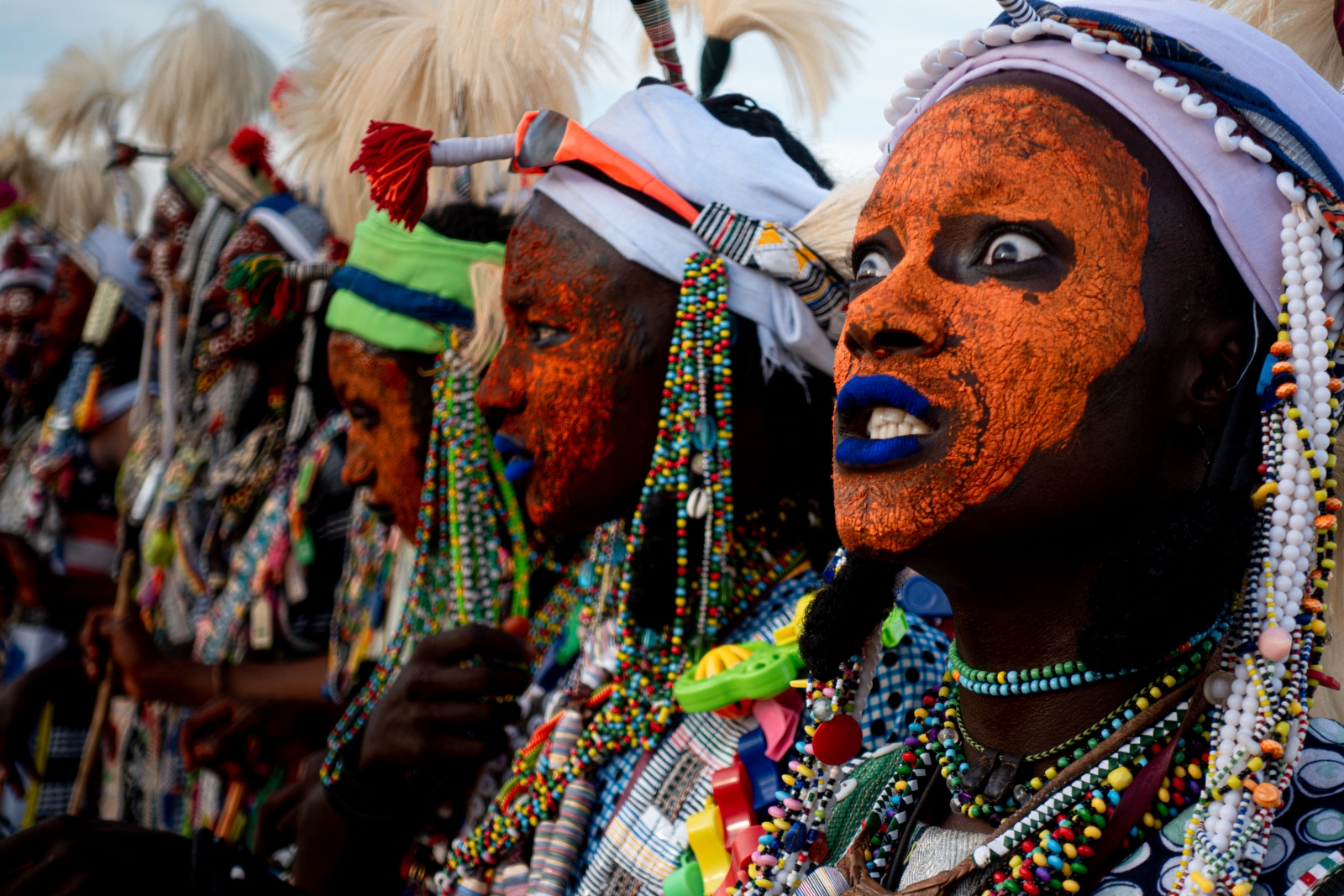 Returning back to the capital, day use rooms are available to freshen up before a farewell dinner and transfers to the airport.

Important: Please note that the exact date of this festival is usually determined around June each year, when the Mbororo elders have decided upon the best time to hold it. The Gerewol festival is held around the end of September (at the end of the rainy season) and so the precise date of this trip may move by a couple of days either side. You should not book flights until this date has been confirmed by us. 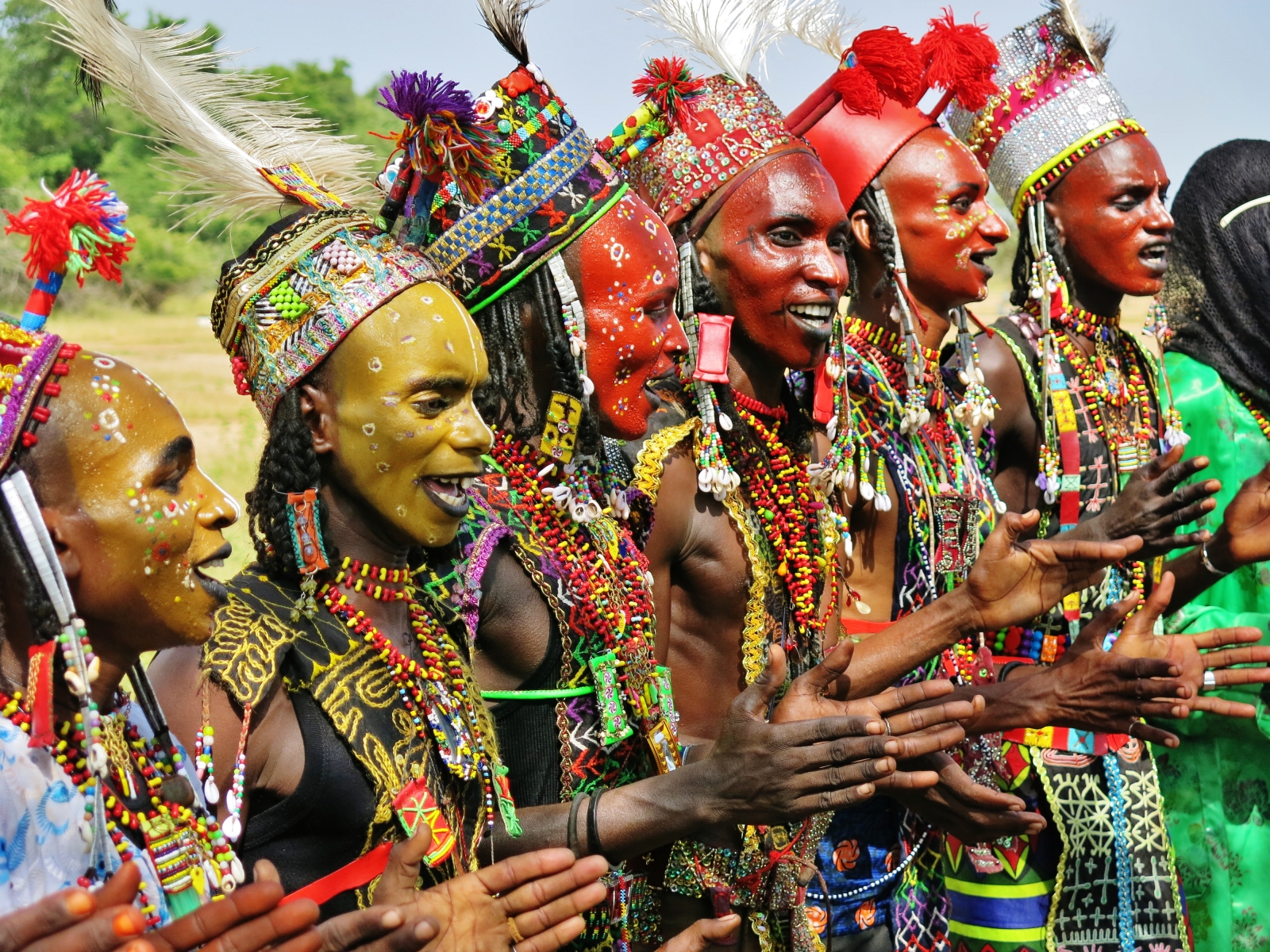 Please note that 2022 and 2023 tour dates are still provisional. The Mbororo people decide on the dates around mid June. Please do not purchase any international flights until we let you know the confirmed dates of the festival.

This group tour operates subject to a minimum group size of 6 travellers.

Please note: this tour operates on the basis of a maximum of 3 passengers per vehicle, plus the driver. Therefore, only 2 passengers will sit on the back seat, which allows for more space and comfort.

Flights from London to N’Djamena return start from around £550. Please contact us for a quotation.

Extra night accommodation pre and/or post tour in N’Djamena costs from £105 per person, per night sharing a twin/double room and £190 per person in a solo occupancy room. 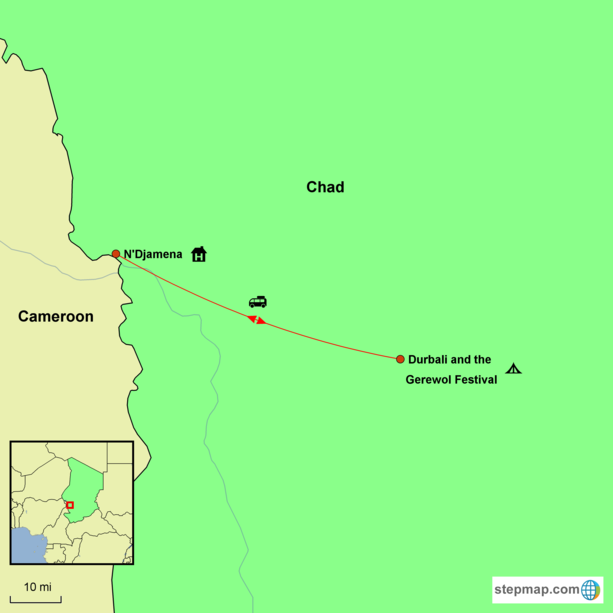 This trip was a spectacular journey. Every day at least one or two amazing nature experiences with fantastic rock formations, sand dunes and surprising finds in the Sahara desert. A thoroughly enjoyable trip which I have strongly recommended to many others.

Read more about Chad and our other African tours