Between the mighty Congo basin and the Atlantic Ocean lies a land of untainted equatorial rainforest where rare primates still roam and local people pass on timeless skills in villages that are little changed for centuries.

To roam through the wonderful landscape and to meet and befriend the deeply welcoming people of Cameroon is an experience that totally immerses you in the rich and vibrant culture and leaves you awe-struck at the natural wonders that abound.

From volcanic mountain ridges to broad, glassy rivers, from forest canopies that throb to the call of the rarest of species to golden sandy palm-fringed shores, this is a land which will steal your heart away.

Our intrepid group tours forge into the very heart of this country, dominated by rainforest and countless small villages. A whole host of fabulously photogenic waterfalls await you, where the waters from the wet season thunder down in the ‘white smoke’ of spray.

The flamboyantly colourful tiny markets and streets of robust square wooden and steeply thatched houses are a ubiquitous joy as you pass through the lush, fruitful fields and forests of Cameroon. Vestiges of faded French colonial glory rub up against craftsmen’s alleys where the wisdom and skill of countless generations are revealed to you by the friendliest of locals.

You will see nature at its wildest and rarest in this unspoilt landscape, from canoes, on roads and during walks that take you to places where few outsiders have been privileged to explore.

Beautiful and varied scenery. Very friendly people – the stay at Okpwa village was a highlight, and the ceremory installing a new chief was a bonus.

Places to visit in Cameroon and on our Cameroon tours 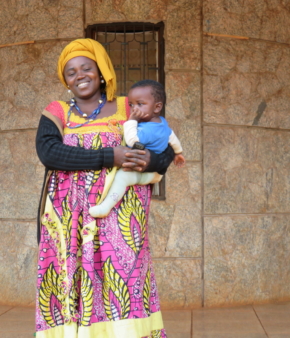 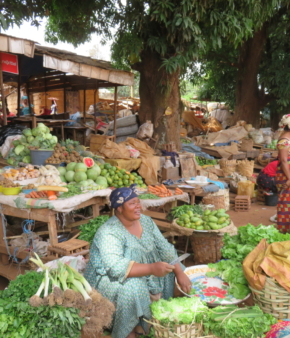 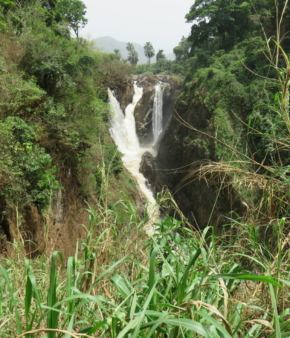 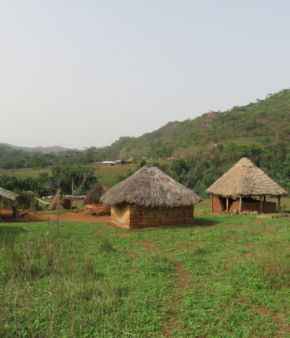 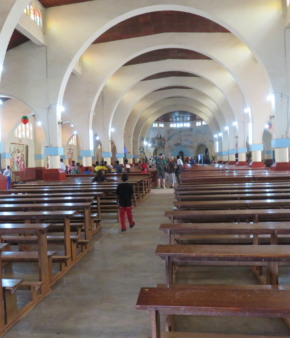 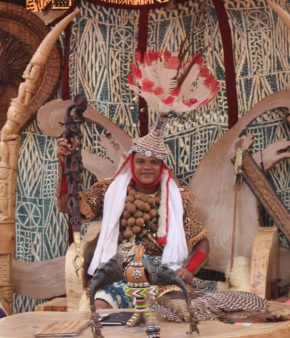 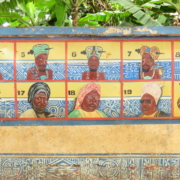 A mere 15 million people call this idyllic land their home, and yet their vibrancy – seen so vividly in the chaos of umbrella shaded roadside markets and the passion of the Ba’Aka villagers in relating their hunting skills and macabre folklore – swells proudly out into the vast spaces of the landscape. A stay amidst the wonderful people of Cameroon, the overwhelmingly luxuriant equatorial forest and time spent exploring the extraordinarily fragile ecosystem’s blend of abundance and endangered rarities will always seem fleetingly brief, but will leave indelibly joyous memories.

If you sit awhile and watch and listen to the women in the Bororo villages as they effortlessly work miracles with cow’s milk or deftly braid with supple fingers, time seems to have stood still in this corner of the great continent.

In its remote forests dwell peoples who claim ancestry from the first intrepid Baka tribesmen that migrated south thousands of years ago; in the grand town of Foumban, the sultans trace their proud lineage back to the 14th century. The result is a humbling encounter with a nation who have thrived within their homeland and yet have retained knowledge and skill-sets that set them apart.  The stamp of colonialism seems a brittle one: elegant royal palaces with ornate balconies have given way to dynamic expressions of modern culture in museums crafted as giant snake heads, in new variations on antique crafts in streets of artisans, and ambitious projects to reinstate lost landscapes of mangrove swamps and primordial forest and live sustainably from them.

From the evidence of its early cultures, it appears Cameroon has always been a melting pot of races, creeds and allegiances. The Baka people, earliest to dominate the landscape, gave way to Bantu tribes who settled the north, driving them into the forest. By the 15th century A.D., the northern Islamic Fulami arrived, and today’s synthesis of faiths began. The Portuguese, arriving in 1472, struck by the abundance of crustaceans in the Wouri river, named the river ‘Rio des Camarões’ and the name stuck and expanded to the entire land. Locals traded ivory and gold with the European powers, but sugar plantations led to the tyranny of slavery. British missionaries brought Christianity, but it was the Germans who seized the opportunity to take control of Cameroon in 1884 during the lust for land termed ‘The Scramble for Africa’.

The colony of Kamerun, with capitals at Buéa and later Yaoundé, burgeoned here and in Douala in particular. With German defeat in 1918, the nation was carved asunder by the British and the French and it was not until the successful wars for independence that unification came in 1961. The nascent democracy gradually foundered: the country has been in the grip of a dictator – Paul Biya – since 1982. Despite recent economic progress and grand infrastructure planning, Cameroon remains decisively rural: 78% is forested and 50% of people live in small villages. These occupy a good deal of the focus for visitors. Winding , classically African, red earth roads twist through plantations of coffee, rubber, cocoa, plantain, pawpaw and pinepapple.

On the coast at Ladji, the fishing trade helps to fund replanting of the valuable mangrove shoreline and this willingness to live within the tolerances of the landscape is increasingly evident: sustainable logging, eco-tourism near the Nyong River where historic pirogue trips are on offer to show visitors the medicinal wealth of bushcraft. This burden of sustainability is extended to the precious and threatened habitats: from the central grassland high plateau to the lush rainforest reserve at Dja, conservation is taking hold here. Travellers can hope to see chimpanzees and western lowland gorillas in the wild, but also will be guaranteed wonderful viewings at the rehabilitation centres that are springing up.

Add to that fabulous birding opportunities at Dja, Mbalmayo and Danala-Eden and the landscape’s forest elephants, leopard, mandrills, monkeys and many more species – Cameroon is a place where nature still abounds.

Read more about Cameroon and our other African tours.