As a West Africa specialist, Linda Maguire had always had a fascination with our Cameroon tours. She has just returned from our latest group tour in Cameroon and this is her report. 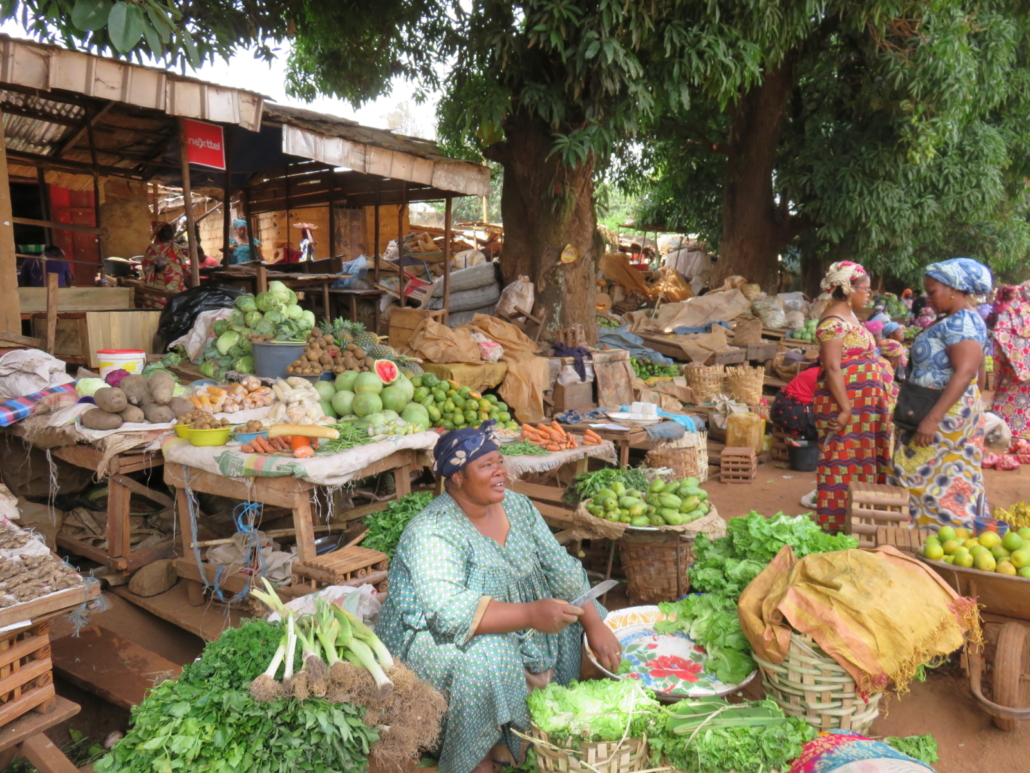 A long term wish was fulfilled when I was given the opportunity to join our group for part of Undiscovered Destinations Cameroon tours in March.

The closure of the airport in Douala for upgrading of the runway led to this tour being re- routed to arrive into and depart from Yaoundé, and having arrived on Sunday evening, we had time only to transfer to our hotel for the night.

We were greeted on Monday morning by blue skies and sunshine, and it felt good to be back in Africa, as we left Yaoundé to make our acquaintance with the country. We found a Cameroon of verdant countryside and scenic waterfalls, impressive palaces with museums full of interesting exhibits and a strong culture of kingdoms each adhering to their individual customs and traditions.

We soon learned that constant police checks are a feature of travelling by road, but as we saw no other tourists along the way, we seemed something of a diversion for the largely good natured security personnel.

We passed mango trees and cocoa and banana plantations en route to our first palace of the trip at Baham- guarded by two lion statues it is also home to a sacred tree which towers over the adjoining buildings, but cannot be felled. We spent the night at the bravely named Paradise Hotel – it was quiet with pretty grounds filled with the sound of birdsong.

Early in the proceedings one of our group revealed himself to be an amateur magician and staged entertaining short performances at roadsides, in markets and at various stops along the way. The looks of amazement, disbelief and sheer wonder from children and adults alike were marvellous to behold.

Tuesday found us in Foumban which is a pleasant town with a nice feel to it. It has its own palace with a king in residence and an impressive facade,set in a courtyard with a fountain, statue and large baobab tree. We were taken on a guided tour of the large museum and were subsequently entertained by an impromptu performance from the king’s own musicians.

We walked around the colourful market which displayed a wide range of goods and were shown the large wooden war drum housed in its own building. We continued past stalls with an abundance of colourful fruit and vegetables to shops selling local handicrafts.

We continued to Babungo with its innovative foundation fulfilling a number of functions for the people within the surrounding area. It also offers the KwaKwa guesthouses situated in tranquil and beautiful surroundings.

It is lovely to relax on the lawn and eat dinner around the fire that is built nightly outside-sadly it rained part of the time on the night of our stay.

We departed early on Wednesday morning for the village of Okpwa stopping in Bamenda for supplies- while the town was not particularly inspiring, it did have a lovely bakery. We enjoyed some of its offerings when we stopped for lunch under the shade of a massive tree with the sound of the Menchum Falls tumbling down the rocks behind us.

These picnic lunches were delicious with avocados, mangos and pineapples providing a small taste of heaven eaten so close to where they are grown.

Most of the group chose to walk across the fields to reach the village- a walk of close to two hours- and arrived late in the afternoon. The people of this village are some of the survivors of the gas explosion in Lake Nyos in 1986 which killed an estimated 1800 people and their livestock and levelled trees and vegetation in the surrounding area.

No explanation has yet been found and we passed at least one group of researchers on their way to the lake to continue the investigations.

Although the facilities of the village are very basic the welcome for visitors is genuinely enthusiastic, especially from the local children, and it provided an insight into life in rural Cameroon. Tents pitched we sat outside under the light cast by an orange, upside-down half-moon and were entertained by the children.

Bright, well educated, curious, disciplined (when their headmaster was close by) and very endearing, they were fascinated by us- in particular the magic tricks, polished nails and the astronomy app on the phone of one of the group.

The following day our Cameroon tour set off on a walk in the company of the headmaster of the local primary school, to visit some of the smaller nearby villages, and the school.

It was the last day of term and the horror of some of the children who had decided to start their holiday early when confronted by their headmaster was comical. The area is very scenic with pastures and gentle hills and cattle ploughing the fields.

We were invited into the home of the local chief who was happy to show us around and his three wives prepared lunch for us to take back to the village. We visited each of the classes on our way past the school full of polite children, while one of the group who had hurt her leg was whisked to visit the secondary school on a motorbike, and back to the village.

Later in the afternoon we took a walk around Okpwa and met, among others, the chief of the village and the oldest inhabitant who is a lady of 91.

Friday saw us bid farewell to Okpwa and return to the bustle of Bamenda but via the peaceful Crater Lake nearby.The market in Bamenda was laid out with a section for each commodity/service and the highlight was the hairdressing “department”.

The hairstyles and hair colours of the ladies of Cameroon are quite amazing- elaborate designs and every colour or colour combination imaginable. Dressed beautifully, often in traditional outfits, these ladies cut a real dash.

From here we headed to our hotel where we were greeted by a line of David Beckham look alike mannequins on the hotel steps. We all relished the utter delight of a hot shower after our two days in the village, and as the minister for sport was due to have dinner on the premises, we were able to share the spectacle of the traditional dancers who were performing for him in front of the hotel.

Please note that this does not happen on all of our Cameroon tours!!

Saturday began with a short drive to the palace at Bafut; it is undoubtedly the most impressive of those visited, both in scale and construction. Part of the site had an almost Elizabethan look to it with orange brickwork abounding. The history, culture and customs were brought to life vividly as our tour guide was Queen Constance, the first wife of the king.

In the courtyard to the rear of the palace was a large wooden xylophone and this was used to accompany some of the princes as they performed traditional dances, After lunch at the Dreamland Restaurant we stopped at the Metchie waterfalls which are sacred to the local Bamileke people and where they make sacrifices of goats and chickens.

We continued on to Bafoussam which was extremely busy due to a number of weddings and a visit from the regional king.

As a result we were relocated to the newly built guest house above the museum at Baham which we had visited at the beginning of the trip.

Although not officially open the lovely people rallied round, and we stayed the night adjacent to the palace in rooms with walls decorated with traditional paintings, and carved wooden doors and panels. Dinner was delivered to us in a bar in town which was in full swing for the night with a DJ playing.

When we took to the dance floor with a couple of the locals we found ourselves being videoed from inside and outside the room. Everybody in the group embraced the occasion and it ended up as a really enjoyable night.

On Sunday morning breakfast was in a very small café, and consisted of the house speciality of a spaghetti omelette with bread and coffee served with condensed milk, but it all tasted wonderful.

This was Palm Sunday and we came across a very enthusiastic procession making its way to the local church where the bishop was expected for the blessing of the palms. It is clearly an extremely important day for the Christian community and there was a large crowd dressed in their best attire to celebrate the occasion.

Moving on we continued the pattern of saving the best until last, as with the palace at Bafut, as the Ekom waterfall where we stopped for lunch was simply beautiful. A backdrop of rainforest showcases its plunge of 80 meters into the river below throwing up a fine spray and creating an ethereal Lost World impression.

From the peace and natural beauty of the falls we followed the road to Douala which became busier and noisier as we drew closer to the city. We stopped at a tropical flower plantation where a variety of species were being grown and packaged for the journey to Europe.

Road improvements and the construction of a new bridge across the river made for traffic congestion and it was therefore a very pleasant surprise to turn into the grounds of our hotel where it felt as if we had been transported to a parallel world. The air conditioning was the best we experienced, the sheets wonderfully crisp, and the restaurant on stilts at the waters-edge of the river very peaceful.

As I was up and about early on Monday morning I was able to enjoy the tranquil surroundings and watch wooden canoes glide noiselessly by, while fish eagles dived into the water for their breakfast. It was unfortunately at this stage that I had to leave the group and travel to Yaoundé to fly home- I was more than sorry to be missing the time on the coast and in the Dja Reserve.

It was a diverse and entertaining tour of an under- visited and stunning country, which was immensely enjoyable, and enhanced by the company of great people. And my advice? Join one of our Cameroon tours at the first opportunity!