Angkor Wat and the horrors of the Khmer Rouge regime tend to be the facets of Cambodia which dominate an outsider’s perspective of this beautiful and complex country, and yet so much more lies waiting to be discovered by those willing to step away a little from the worn tourist trails. Beyond, lie grand royal places, enthralling safari experiences, secretive national parks with fairy-tale waterfalls, a bounty of Buddhist sacred sites and a people whose resilience is matched only by their hospitality. Expect an ever-changing scenic and cultural experience: from remote highland villages to the street cultures of the capital, dazzling colour, chaotic exuberance and idyllic calm await in equal measure.

Our group tour and tailor-made trips will offer you a far-ranging exploration of Cambodia’s multitude of charms. Enjoying the iconic Angkor Wat, reached by bicycle and explored at twilight, is a given, but beyond you will be entranced by the splendour of Phom Kulen reserve and the temples of Ta Phrom entwined in tendrils of luxuriant jungle. Heading south, there are trails to cycle, rivers to paddle down, all culminating in Phnom Penh’s grandeur. Whilst the narrative of Polpot’s tyrannical rule lingers – you meet individuals dedicated to clearing Khmer Rouge mines and experience the ‘Killing Caves’ of Phnom Sampeou and the infamous ‘Killing Fields’. Yet past suffering is subsumed under a wave of genuine warmth from the local villagers and the amazing street charities that you will meet along the way which define Cambodia as a nation of optimism and cultural abundance.

Places to visit in Cambodia and on our Cambodia tours 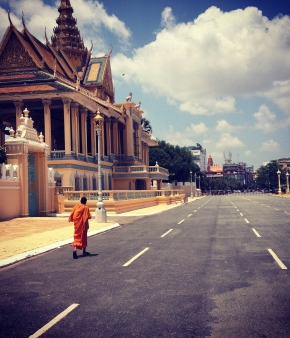 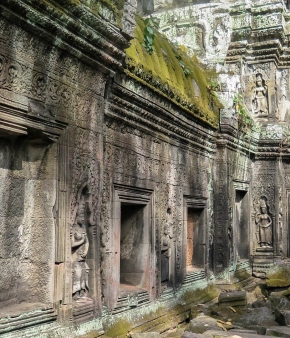 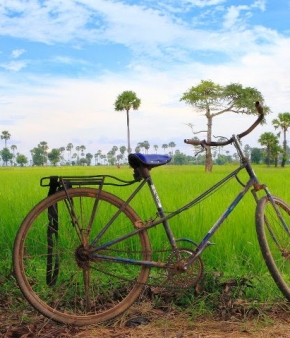 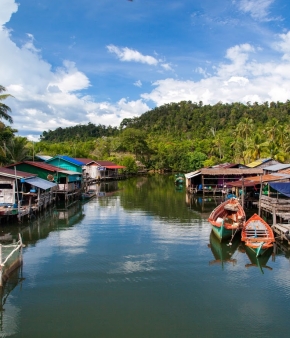 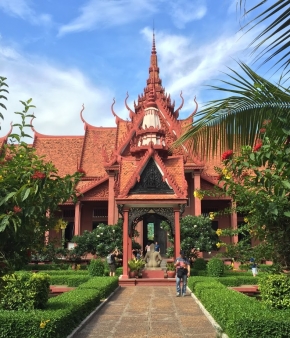 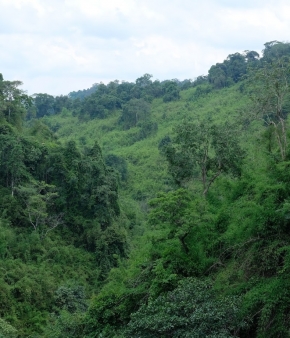 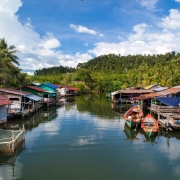 Much less celebrated than its neighbours, Cambodia’s of natural beauty and antiquities are nonetheless captivating. Marvel at the diversity of the Tonle Sap valley, scattered with glorious Buddhist sites, from tiny cave shrines to colossal temple complexes, begging exploration on foot or bicycle down fascinating red-clay trails; share bamboo sticky rice with villagers amidst the remote, lush Cardomon-Elephant Mountains before basking in the revitalising waters of Kampot River; learn about the gladly departed Khmer Rouge regime, before treading the decadent silver floors of Phnom Penh’s Royal Palace. An enriching journey indeed.

Cambodia’s geography has contributed significantly to its sense of national identity through the ages: the tropical lowlands are surrounded by uplands to the south-west and north-east in particular, making for a country that is at least partially enclosed and looks heavily to the twin great river valleys of the Mekong and the Tonle Sap. The additional feature of heavy forest, now increasingly under threat, from the dry uplands, via the rainforests of the lowland to the swamps, meant that the earliest and indeed subsequent human activity was centred on the arterial waterways.

Rice agriculture here dates from the 3rd millennium B.C., but beyond that, little is known of the civilisations that preceded the Iron Age that began in roughly 500 B.C.. During this time, trade began with India and meant that the culture was influenced by this contact. Javan over-lordship was not shrugged off though until the rise of the Khmer Empire of the 9th century A.D. when Jayavarman II declared himself ‘Devaraja’ – God-King – and the powerbase began to swell. In fact, the nation held off the advance of the Mongols of Kublai Khan who famously conquered China in the 13th century.

All this was supported by the unifying force of Theravada Buddhism which produced such architectural wonders such as at Wat Phnom and later at the magnificent capital city of Angkor, the largest pre-industrial city ever, stretching over a mind-boggling near 3,000 km². The traditional Khmer lands stretched to the mouth of the Mekong and were only lost when the golden age of the Khmer ended with the sacking of the capital in 1432 ushered in an age of decline and piecemeal states, culminating in the dominance of the Siamese and Vietnamese over the Cambodian region.

The loss of the delta in 1698 was typical of a people kept as vassals to their dominant neighbours. Enter the Europeans: the Portuguese recorded the land as early as 1511, but it was in 1863 that the then King Nordoram sought French aid and became part of the French Indochina protectorate, temporarily losing much of their northern territory in the process. Following the invasion and expulsion of the Japanese in the 1940s, the mood for independence grew and led to a 1953 monarchy and decades of turbulence, linked to their relations with Vietnam and the USA. A 1970 military coup and brief genuine democracy ended with the communist insurgents from the north sweeping to victory and establishing Pool Pot’s Maoist rule.

He sought to return the nation to an 11th century model of agrarian economy and his purges of intellectuals, ethnic minorities and Buddhism killed a staggering 25% of Cambodian and razed 95% of its religious sites. By 1978 Vietnam’s invasion removed the Khmer Rouge and a turbulent period of democracy, puppet monarchy and civil strife gradually subsided into the current stable and developing nation. Cambodia’s varying topography and once all-encompassing woodland has made for an excellent level of biodiversity: 212 mammal species that include elephants, deer, panthers and sun bears and make for interesting nature exploration, as do the 240 reptiles such as the Siamese crocodile, copious snake species and the 536 bird varieties and 250 freshwater fish, especially in the waters of the new biosphere reserve of Tonle Sap Lake.

Yet, understandably, during the chaos and turmoil of the late 20th century in particular, the focus on the environment became blurred, and so logging and poaching have rendered much of this under severe threat. Indeed, the national animal, the oxen-like forest kouprey is probably now extinct. Tourism and the realisation of nature in encouraging this is now beginning to bring some urgency for the need to conserve what remains of its wildlife assets: consequently, 20% of the country’s 181,035 km² is given over to reserves and national parks. Schemes such as at Phom Kulen National Park give excellent insight into the crusade against illegal hunting.

Much remains to be done, the excitingly, a huge amount of the country’s nature still remains to be mapped: in 2016 alone, 163 new animal species were recorded and such as insects and butterflies are broadly an unknown quantity here, such is the proliferation. However, it is the culture of Cambodia which perhaps offers its greatest draw: beyond the magnificence of its historic sites, time spend amidst the 30 different hill tribes, sharing their homes, food and traditions is a joy, and indeed places such as the student campus at Phare indicate a nation fiercely proud of its skillset and keen to perpetuate time-honoured expertise and crafts. Since the demise of the Khmer Rouge and the slow transition to fully-fledged democracy, Cambodia has made huge strides to arrest the stark economic gaps it faced.

During the 2000s, poverty levels have tumbled from 52% to 10% and life expectancy risen from 55 to 72; this is clearly a nation economically and socially on the rise.  Yet in simpler terms, Cambodia still remains relatively unknown: its street food and more genteel cuisine are strange to most outsiders who often are familiar with such as Thai and Vietnamese food. Hence, whether you are munching tentatively on deep fried arachnid or turmeric cake on Phnom Penh’s riverside market or savouring the delights of bamboo sticky rice and a kuy teav pork broth in the Fabulous Friend’s streets kid-run restaurant nearby, you can be assured of novel and fresh experiences in a wonderfully sociable land.

Read more about Cambodia and our other tours in Asia.