The only island in the world to be shared by three nations, Borneo absolutely meets your highest expectations.

Its vast rainforest – third largest in the world – hides a myriad of wildlife, much of it endemic and its sultry climate means that the lure of its idyllic coastline is irresistible. Within the forested interior over 300 different ethnic groups can be found, often dwelling in traditional longhouses, whilst the river lands abound still with stilted homes.

Our group tour and tailor-made trips focus on the beautiful reaches of the Malaysian part of the world’s third largest island. From the dazzling shores and coral flanked islands of the South China Sea to the lush green interior where rainforests dominate and small indigenous villages welcome you to experience their homes, fascinating cultures and cuisines, the pervading sense of warmth here is inescapable.

Along your way you cannot fail to be charmed by Borneo’s dramatically diverse wildlife, much of it critically endangered: close encounters with orang-utans and the protected proboscis monkey are tantalising treats whilst a cornucopia of birding opportunities await at every turn.

Less celebrated, but equally inspiring are the vast underground rivers which hold simply stunning karst formations and caves from which millions of bats blur across the dusky heavens. Borneo is simply enthralling.

One of my most favourite trips. The highlight for us was the Orang-utan sanctuary. We had looked forward to this and it did not disappoint. Thanks Jim.

Places to visit in Borneo and on our Borneo tours 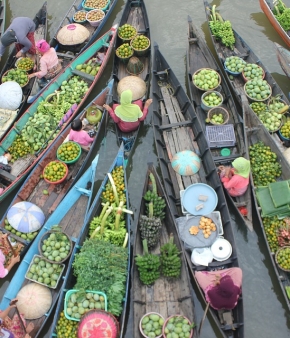 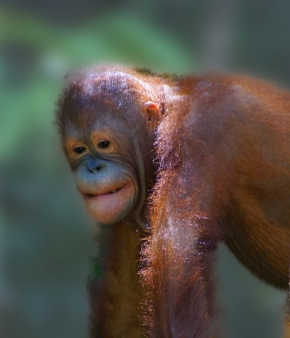 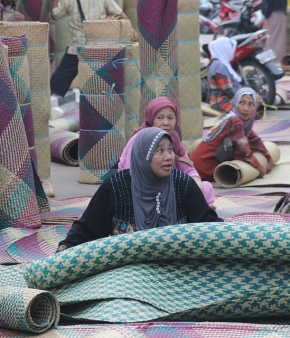 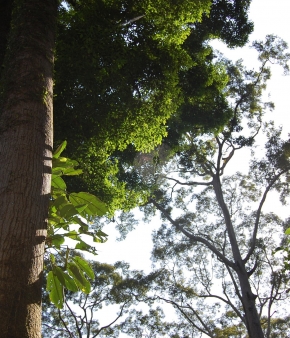 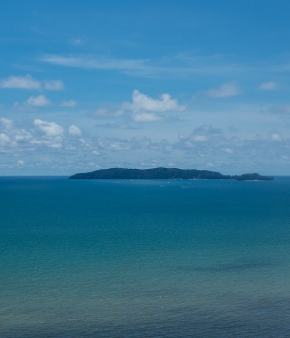 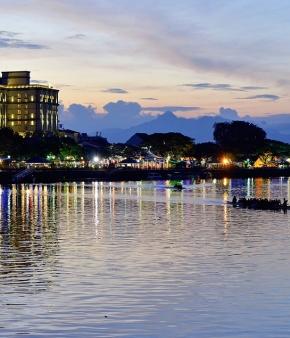 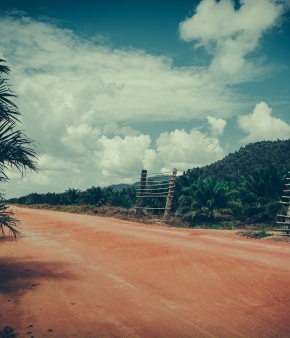 Off the Beaten Track 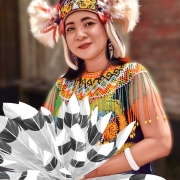 In a world where so much of nature teeters on the brink, there are times in Borneo when you feel it almost at tipping point: the opportunity to wonder at superb orang-utans or paddle the pristine-forested Kinabatangan River in search of Bornean pygmy elephants feels increasingly like a rare privilege. Beyond the heady joys of nature spotting are communities that seem timeless in their cultures, hidden away in shy, but deeply hospitable corners of the interior. Throw in a tranquil coast and the urban cultural hotspots and Borneo becomes simply unmissable.

On an island so vast – 743,330 km² in total – a hugely varied landscape is hardly surprising. Borneo does not disappoint.

Part of the Greater Sunda Islands, the island’s peak at Mount Kinabalu (4,095m) even contains some Alpine meadows, but the majority of the interior is montane and lowland rainforest, possibly over 140 million years old, with an extraordinary range of flora and fauna: 15,000 flowers, including the exceptional crimson monster flower, 3,000 species of tree, 221 mammal and 420 bird species. The rate of endemism is high since the island has been separated from Indochina since the end of the last ice age.

The island’s prolific natural resources in fact probably are linked to its name: ‘Buah Nyiur’ is a local word for coconut and likely the etymological origins of Borneo, adapted by European ears; the locals call their island ‘Kalimantan’ – ‘Burning Weather Island’ which points more readily to an island which straddles the equator and the lowlands and their humid heat, characterised by mangroves and peat swamps with poor soil. Hence early humans headed into the relative safety and fertility of the forests and the thousands of small indigenous villages in the interior speak of both this and of the retreat from Japanese occupation during World War II.

Whilst no active volcanoes are discernible on the island, crater lakes and hot mud and volcanic springs still can be found here and some of the smaller islets off the Malaysian coast are the results of very recent sub-marine eruptions, clad as they now are in an entrancing array of corals which draw snorkelers and divers to thrill at the myriad of small tropical fish. Another key feature of the region is its wealth of karst scenery. The Deer Caves near Mulu are the world’s longest inter-connected system and are merely one of a host of examples which contain stunning limestone formations of stalactites, stalagmites, rock corals and helitites.

Subterranean refuges for some of Borneo’s incredible number of bats are commonplace and to watch the dusk emergence of several million of these inimitable creatures at Gomantong Caves is a peerless experience. The human imprint on this land of diversity and natural spectacles has been increasingly impactful. For millennia here, humans lived subsistence lifestyles, entirely sustainable with the resources and landscape and this is still reflected in the village cultures of such as the Ulu Sarikei longhouse settlements, the Rungus tribe and the fruit farming Kiau people.

The earliest figurative cave art in the world produced 40,000 years ago was found in East Kalimantan and small-scale trading cultures certainly existed during Roman times. The fame of the island’s resources was enshrined in its nomenclatures: the Indians, who brought Hinduism here by the 4th century A.D. called it ‘The Land of Gold’ and the Javans called it ‘Diamond Island’.

Most influential of all were the Chinese who dominated market commerce here, taking tortoiseshell, ivory, horn, hardwood and even edible birds’ nests made from cave swiftlet saliva back to their homeland!

The Sarawak river deltas were thriving ports with the vibrant floating markets which still exist and settlements against flooded swamp and mangrove took on the distinctive ‘tallhouse’ appearance, still very much visible in such as the timeless Melanau villages. Islam probably arrived with Arab traders during the 10th century and had endured as the core religion of Borneo. By the 14th century, the external links had become bonds: the region’s towns paid tribute first to the Majapahit state and then to Ming China.

It was the latter link which probably led to the arrival of the first European – Franciscan friar Odoric of Pordenone – in 1330, heading from the Chinese court to India. The complexities of the next few centuries led to a series of separate power bases that fashioned the modern political partitioning of Borneo into three states – tiny Brunei’s sultanate, Malaysia’s ex-British colony in the north and Indonesia’s larger ex-Dutch powerbase in the south. Ironically, the first major state was that of the Sultan of Brunei.

Having conquered the vast majority of the coast, it broke from Majapahit and had its golden age through the 15th to the 17th centuries. Smaller rival sultanates brought European involvement, first from the Dutch, then the British, the Dutch, the Spanish and even the USA. By 1812 this resulted in the Sultanate of Brunei ushering in the British who also annexed Sabah and Sarawak, the latter in an extraordinary 100 year dynasty of ‘White Rajas’ begun by Brooke, an English adventurer who managed to secure the Sarawak region, ostensibly for the British, but ruled it autocratically and passed it on to his descendants.

Meanwhile, from 1815 the Dutch expanded their control of roughly modern-day Indonesian Borneo, a territory they were to hold until the arrival of the Japanese in 1941. The British protectorate, enshrined in law in 1888 was also taken and the subsequent brutality included the execution of most regional leaders, many intellectuals and hundreds of Chinese. P.O.W. camps were established here and resulted in thousands of deaths, notably during the Sandakan Death March when only 6 out of 2,500 British and Allied troops survived a series of forced treks around the island. The result was that thousands fled to the interior, impossible to follow and locate, and remained there until an Australian army liberated them in 1945.

Southern Borneo instantly declared independence and became part of the Indonesian superstate, whilst the north remained under British control until 1963 when Sabah and Sarawak joined Malaysia. Brunei chose autonomous independence. Through the 1960s border raids from south to north took place and indeed Moro pirates and Islamic groups still harbour designs on Sabah in particular. Democracy is well established in Malaysia and Indonesia and with this has come increasing world pressure to protect the environment from a burgeoning population and uncontrolled encroachment on the virgin forest for logging and palm oil plantations, both commodities in high demand from other countries. The result was the Forest Law of 1999 where a massive 27 million hectares were declared conservation areas, with limited effect.

Sites such as the Kinabatangan River and Bako Reserve show what abundance of wildlife can still exist here: the former still contains critically endangered species like Irrawaddy dolphins and the Borneo river shark and Borneo pygmy elephants and orang-utans, whilst in the hidden reaches of the interior clouded leopards and a plethora of avifauna. Indeed, recent wildlife expeditions constantly still uncover scores of new species of all types. Sustainable tourism is gradually coming to the fore and small-scale successful projects, such as fair-trade tea plantations, whilst clean energy sources have become a focus for environmentalist charities that put pressure on governments in opposing the devastating destruction of rainforest and indigenous communities to develop H.E.P. dams.

Clearly Borneo’s potential in eco-tourism is colossal, something that needs to increase rapidly to protect this incomparable land.

Read more about Borneo and our other tours in Asia.