Long off limits to foreigners, ‘The Land of the Thunder Dragon’ saw its first tourists in 1974, its first domestic TV broadcasts and internet access in 1999. No longer an absolute monarchy, Bhutan remains a conservative Buddhist country, hard pressed between India and Chinese-occupied Tibet, fiercely independent and proud of its cultural heritage.

Visiting Bhutan today is akin to discovering a forgotten kingdom, somewhere that operates in a different way to the rest of the world and is distinctly circumspect about entering the modern age, and let’s face it, who can blame it?

Tucked away in a remote corner of the Himalayas, Bhutan is a nation unlike any other, a tranquil idyll where people still wear national dress and gross national happiness is more important that gross national product.

Once closed to the outside world, Bhutan now allows a limited number of travellers to experience its charms. Our tours to this beautiful nation allows a glimpse of some of its most spectacular sights, from the amazing Taktsang (Tiger’s Nest) Monastery in its dramatic cliff face location to the imposing Punakha Dzong, an incredible fortress with a turbulent past.

Travel with Undiscovered Destinations through spectacular Himalayan scenery and have the opportunity to visit traditional Buddhist temples. One of the many highlights of travelling in Bhutan is the chance to celebrate the Tangbi Mani Festival including the fire blessing ceremony.

Our holidays in Bhutan offer you a marvellous insight into the scenery and the way of life in this remote mountain kingdom.

The guide we had, Dechen provided exemplary service and is a credit to her company as well as her country. As a representative of the people of Bhutan she could not have been better. She was delightful company, helpful and extremely knowledgeable about Buddhism in Bhutan. She went out of her way to accommodate all our wishes. Our driver Ram is also to be commended for his calm, competent driving and his cheerful demeanour. These two between them made our trip the success that it was. Bhutan is a wonderful country; I feel privileged to have been able to travel there.

Places to visit in Bhutan and on our Bhutan tours 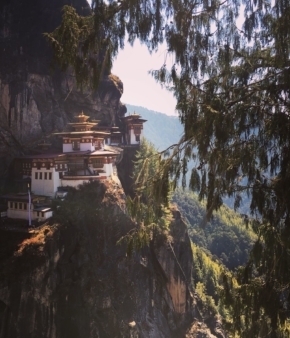 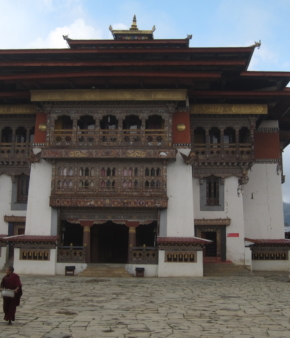 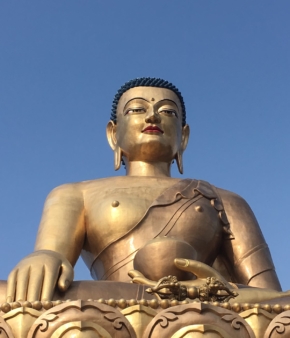 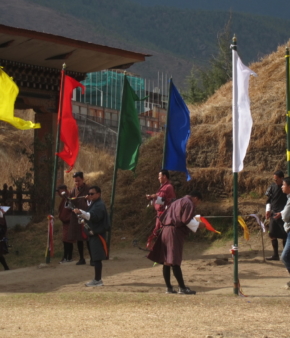 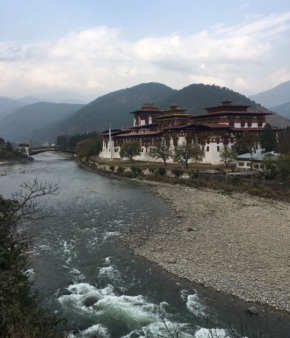 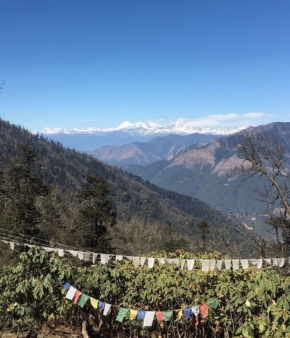 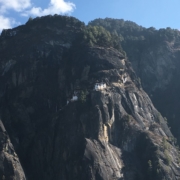 Bhutan, as small Kingdom hidden away in the Himalayas is probably best known as the country that invented and ranks ‘Gross National Happiness’ above Gross National Product. There really cannot be a lot wrong with a country with those priorities! In some ways the media attention on Gross National Happiness has taken away from the other attractions that the country has. One of the highlights of any visit to Bhutan is the trek to the Tiger’s Nest Monastery, the sacred Taktshang monastery which clings impossibly to the rock face 900 metres above the valley floor. An amazing sight and well worth the effort to reach.

A great answer to a pub quiz question, or for fans of ‘Pointless’ Thimphu is the capital of Bhutan. Thimphu has developed over recent years and now exhibits many of the recognisable features of other cities, although it still retains many of its traditional sites and attractions. While there are now vehicles, bars and restaurants, you will still mingle with local people in traditional dress and crimson clad monks, lending an enduring charm to the city.

Bhutan also offers great hiking and some spectacular wildlife viewing. If you are lucky enough to be on Undiscovered Destinations tour during the Black Necked Crane festival, you may get to witness these majestic birds set off on their annual migration.

Read more about Bhutan and our other  tours.