Best Things to do in Armenia

Home > Blog > Best Things to do in Armenia

Best Things to do in Armenia

Armenia has to be one of the most undiscovered destinations in a relatively undiscovered region. Situated in the Caucasus region between Asia and Europe, Armenia has plenty to keep the intrepid explorer interested. Here is our list of the best things to do in Armenia.

Armenia has some outstanding religious sites including the Greco-Roman Temple of Garni and the stunning 4th-century Etchmiadzin Cathedral which is the headquarters of the Armenian Church.

According to a Greek inscription, the Temple of Garni was founded by Tiridates I of Armenia. It was in 305AD when the Armenian King Tiridates III converted the country to Christianity that all of the pagan places of worship were destroyed. The Temple of Garni was the only Greco-Roman structure to have survived this purge. The temple you will observe today is a reconstruction made between 1969 and 1975, after several excavations in the area were accomplished. It is certainly worth the 30 minute trip from the Armenian capital Yerevan to visit the Temple of Garni.

For the seven million members of the Armenian Apostolic Church, Etchmiadzin, sometimes referred to by its old name of Vagharshapat, is the spiritual centre. Etchmiadzin Cathedral is one of the oldest churches in the world. Built in AD 301-303 by King Trdat III (Tiridates) and St Gregory the Illuminator, UNESCO states that ‘its cruciform plan with four apses and a central dome carried on four pillars is the outstanding contribution of Armenian ecclesiastical architecture to Christian architecture as a whole’. Apart from its architectural qualities, the cathedral is worth visiting to view the original interior painted frescoes. 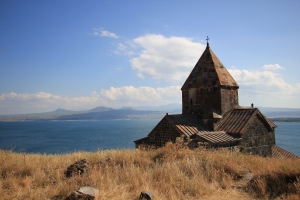 Best things to do in Armenia- Lake Sevan

The “pearl of Armenia”, Lake Sevan is one of the largest high-altitude freshwater lakes in the world and is a popular summer beach destination for Armenians. The lake is surrounded by numerous mineral springs, picturesque landscapes  and cultural monuments, attracting tourists from around the world.

There are a number of water based activities happening around Lake Sevan. You can swim in the cool blue waters of the lake, worship the sun on the public beaches or jet-ski and wind-surf along the lake. Boat rides on the lake are also available if you would like to experience the many different parts of the lakeside. The region round Lake Sevan is also rich in history. Roughly 900 intricately-carved medieval Armenian cross-stones called khachkars can be found in the Noratus Cemetery and on the lake’s southwestern shore, you’ll find the 9th-12th century Hayravank Monastery in the Gegharkunik Province.

It may be wrong to list the Genocide Museum as one of the ‘best’ things to do in Armenia, but it is certainly a must visit. Built in 1967 on the hill of Tsitsernakaberd in Yerevan, the Armenian Genocide memorial is Armenia’s official memorial dedicated to the victims of the Armenian Genocide.  The museum is dedicated to the memory of the 1.5 million Armenians who perished in the genocide.  Completed in 1967, the Genocide Monument has since become an integral part of Yerevan’s architecture and a pilgrimage site. 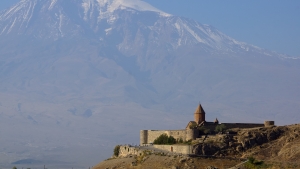 Best things to do in Armenia – Khor Virap

Located near to the border with Turkey on the plains of Mount Ararat is Khor Virap Monastery. The stunning location and the historical significance make this a definite must see for any keen photographers.

Yerevan is by far the largest city in Armenia and is a great place to start for anyone wishing to get a feel for the country. Spend you time exploring sites such as the Grand Republic Square or climb up the Cascade to see the city’s monument to Soviet victory in World War 2.

The best way to see the city is by walking. You can easily get a great feel for the city and its history, from the Persian times to the Soviet periods. There is also the chance to get to see some of Yerevan’s modern side. Discover the contemporary architecture, bustling coffee shops and trendy restaurants that are scattered around the city.

If it is a hot summers day, then head to Yerevan Water World for some cooling off. The three hectare water park is home to 12 waterslides, 7 outdoor pools, 3 indoor pools and 2 children areas.

Known as the Armenian Stonehenge, Zorats Karer is a prehistoric archaeological site near the town of Sisian in the Syunik Province of Armenia.  The site is believed to be around 3500 years older than than the English version and is a great stop on a tour of Armenia.

The name comes from the two Armenian words, one which means stone and one which means sound, therefore the name can be interpreted as “speaking stone”. This name is believed to be used because the stones can actually talk. If you visit the area on a windy day, when the wind blows through the holes in the stones you will hear the whistling sound that is made and which gave rise to the name.

The Wings of Tatev is a 5.7km cablecar route between Halidzor and the Tatev monastery in Armenia. It is the world’s longest reversible aerial tramway built in only one section. The full journey takes about 12 minutes as you travel over the ravine of the Vorotan River. It’s the shortest, fastest and most dramatic route to the Tatev Monastery and is gibes you truly unforgettable views from 320 meters above the ground. It is worth spending time at the monastery and trying to appreciate the effort required to build such a building in such a spectacular location.