The Best Places To Visit in Algeria

Best Places To Visit in Algeria

Stretching from the vast sandy desert climate of the Sahara all the way up to the Mediterranean sea, Algeria is Africa’s largest country. Algeria travel presents plenty of exciting opportunities and tourist attractions for visitors to the country, whether you’re a fan of history, UNESCO worlds heritage sites, architecture, art or food, making it a great unexpected destination for your next holiday.

If you are looking for a desert adventure then Algeria is the place to visit! 80% of Algeria is covered by the Sahara desert and in the Great Erg, you can climb sand dunes which are up to 150 feet high. There are also plenty of national parks if you want to explore a wider variety of landscapes, alongside plenty of interesting towns and cities across the country.

In this article, we share our top recommendations for the best places to visit in Algeria.

The largest hot desert on the planet (only the Arctic and Antarctica are larger) the Sahara desert crosses the whole of North Africa including Egypt, Tunisia, Algeria and Morocco. It really is difficult to comprehend the size of the Sahara. It is almost the size of the United States of America! When planning to visit the Sahara, you must take into account the desert climate.

The high average temperatures that you would expect in the Sahara along with a very low chance of precipitation mean that there is a very real threat to human life if travelling unprepared. With daily average temperatures often higher than 40°C,  exposure to this kind of heat in the sand dunes can lead to death or serious illness. Of course, being in the Sahara, access to healthcare in the Algerian desert may be a very long way off.  The hot season is far too warm for tourists or travellers so tourism to Algeria is seasonal.

When it is safe to visit Algeria and the Sahara region then there are plenty of activities to keep the adventure traveller occupied.  Sand-boarding and cross-desert treks are popular attractions. Tourism in Algeria and the Sahara remains on a small scale. Much of the travel to the Sahara occurs in the cities on the edge of the Sahara. There are some very popular locations within Algeria that have featured in a number of blockbuster films. These are particularly attractive to fans of the Star Wars films with the desert locations featured in a number of films. 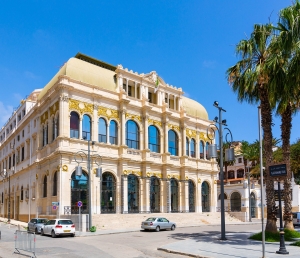 Algiers is the capital city of Algeria, with a population of 3.5m. There is plenty to keep the active traveller interested in this most unusual of capital cities. You can explore French and Arab architecture, visit the Ketchaoua mosque or Notre Dame d’Afrique, wander through museums, and experience the UNESCO World Heritage Kasbah and the Casbah of Algiers. Whether you are just having a short break or a long tour of Algeria, you cannot miss out on exploring Algiers.

A ‘must see’ area of Algiers is the Casbah. This is a very a historic part of the city and is crowded with almost 80,000 people. It is also a UNESCO World Heritage Site.  Twisting stone paths create a labyrinth-like maze and it is very easy to lose your bearings when walking around this old quarter.  Unfortunately, the Casbah is subject to a great deal of dilapidation but there has been a great amount of work recently to repair the area.  The outer walls and gates of the Casbah date to the early 16th century and it was this area where pirates were notorious for taking and keeping  European hostages.

Life in Algiers is bustling, and it’s easy to just sit back and watch life go by. There are plenty of options with regards to hotels and hostels as well as many fine restaurants serving local cuisine. There are a number of luxury hotels for those looking for top end accommodation. The capital of Algeria is one of those wonderful places that you can return to time after time and never see everything that the city has to offer.

Algeria is home to some of the most impressive Roman sites on the planet. Any travel to Algeria must include visits to Timgad and Djemila. When you visit these vast and almost perfectly preserved Roman towns, one of the most astounding things will be the almost complete lack of any other tourists around. Where else in the world can you walk around ancient sites and almost always have the entire place to yourself?

These are the ‘must visit in Algeria’ places!

Djemila, which is located 25 miles southeast of Sétif,  is undoubtedly the most impressive of the two Roman sites mentioned here, mainly due to its stunning mountain location. Timgad, which is to the east of Constantine, is certainly also worth visiting with the incredible architectural layout of the Roman ruins being lauded throughout the world.

If you want to escape the normal Mediterranean beach locations, then a holiday in the beautiful country of Algeria may be exactly what you need. From Béjaïa to Oran, you will find a vast range of different beaches spread along this largely undeveloped stretch of the North African coast.

The first Algerian beach location we would visit is Madagh Beach, which is just to the west of central Oran. This is a typical Mediterranean looking beach where you will be greeted by a multitude of bright tents and umbrellas that look over the Alborran trees. The crystal clear water is perfect for snorkelling or just floating in and soaking up the sun.

If you are staying in Algiers and want to escape the city for a day trip, then a visit to the town of Zéralda is ideal. Best described as a ‘simple town’ it is not too far away from the capital and has some famous local beaches. Spend your time exploring  Sables beach and Le Azur plage (The Blue Beach) as you get to know Algerian beach  culture. 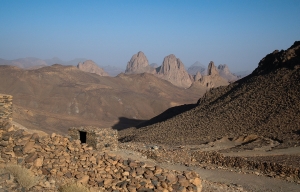 The Hoggar Mountains, also known as the Ahaggar Mountains are a volcanic mountain range in the southeast Sahara desert region of Algeria. The highest peak of the mountains climbs to a towering 3,003m above sea level, dominating the desert around. For photographers, mountain lovers and anyone with a love of the rugged outdoors, this region will take some beating.

Assekrem is probably the best known of the many sights of this region in southern Algeria. A must-visit is the lodge that sits on the saddle of the pass. Here tourists can spend the night and get to enjoy the stunning sunset and equally as impressive sunrise as it crosses the volcanic mountains and rock formations.

Not a ‘best place to visit’ as such, but any visit to Algeria would not be complete without hopefully meeting or learning more about the nomadic Tuareg people. The majority of the Tuareg are of Berber descent, but being a Tuareg is not linked to any specific race or family linage. As long as the lifestyle, traditions and language are accepted in north Africa, people are seen as Tuareg.

The modern day Tuareg inhabit a vast area in the Sahara, stretching from far south western Libya to southern Algeria, Niger, Mali and Burkina Faso. Their culture has now become synonymous with desert travel and the nomadic lifestyle.

GO TO BLOG
It was wonderful to travel through Japan

Festivals and Cranes on a holiday in Bhutan
Scroll to top