Where Are The Best Places To Visit in Georgia?

Home > Blog > Where Are The Best Places To Visit in Georgia?

Where Are The Best Places To Visit in Georgia?

From the Caucasus Mountain villages to the Black Sea beaches, there are plenty of attractions to keep the intrepid traveller interested when visiting Georgia. 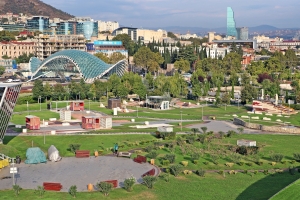 The capital of Georgia is definitely one of the highlights of any visit to Georgia. Surrounded on three sides by mountains, and as capital cities go, Tbilisi has to be in one of the most stunning locations. Legend says that in the mid-5th century, King Vakhtang I Gorgasali was hunting with his prized Falcon in this area of Georgia. The King’s falcon attempted to catch a pheasant during the hunt and during the ensuing fight, both birds fell into a nearby hot spring and died from their burns. King Vakhtang was so impressed with discovery of the hot springs that he decided to cut down the forest and build a city. This city became Tbilisi.

The Old Georgian word ‘tbili’ means warm and this is where the name of Georgia’s capital city comes from. Despite the legend, archaeological studies have shown signs of human settlement in the area from as long ago as six thousand years.

One of the best places to visit in Tbilisi is the Old town, with its winding streets, vast array of cafes and restaurants and laid back cosmopolitan atmosphere. You can easily spend a day wandering around and enjoying the views and food. Shardeni Street is the place to go for plenty of restaurants, open air café-bars, trendy night clubs and art galleries.

Apart from the old town of Tbilisi, places of interest include the Trinity Cathedral which is one of the tallest Eastern Orthodox cathedrals in the World, Narikala Fortress which dominates the city from its mountain location and the famous flea market, located on the Dry Bridge. Here you can find a great collection of art, antiques and even Soviet memorabilia for sale.

Located high in the Greater Caucasus mountains, Kazbegi National Park is a stunning area of mountains and small villages that should be on any travellers list of places to visit in Georgia.

Kazbegi National Park is names after Kazbegi Mountain, which rises to 5,047 metres above sea level and is the third largest mountain in Georgia. In Greek mythology it is said that this is where the Titan Prometheus was chained to a mountainside. When you visit you will understand why this region of Georgia is so surrounded by myth and legend. There is a magical and other worldly feel with hot springs, acidic and carbonated lakes surrounding the mountain, and earth tremors are not uncommon.

The town of Stepantsminda (also known as Kazbegi) is a great place to use as a base when exploring Kazbegi National Park. The town is a charming place to spend a few nights and to return to after trekking or hiking the mountain paths. The many good quality guesthouses in Stepantsminda will certainly give you a very warm welcome and they are renowned for treating their guests like family. Many of the hotels and guest houses will have beautiful views of the mountains and some even have views of the stunning Gergeti Trinity Church. The Gergeti Trinity Church is a must visit during a trip to Kazbegi National Park and with the opening of a new road, access is now easier than ever.

Gori is Georgia’s seventh-largest city and is the administrative capital for the Shida Kartli region. With a position that is almost halfway between Tbilisi and Kutaisi, Gori has served as an important point on the Silk Road trading routes for centuries.

The most prominent feature of Gori is the fortress. Standing on a rocky hill in the center of Gori, the fort is mentioned in chronicles as early as the VII century. Some Georgian historians believe that the fortress was built by Byzantine Caesar Heraclius as a place to store ammunition and weapons during the battles against the Persians.

Another prominent reason that travellers visit Gori is the Stalin Museum. Being the place of the dictators birth, there is a museum in the house where Joseph Stalin was born. An unusual tourist attraction, here you will find Stalin’s personal train car that he used to visit Tehran, Yalta, and Potsdam. The museum also includes some of his personal belongings and collections of Stalin’s paintings, as well as photos, films and other historical artefacts. 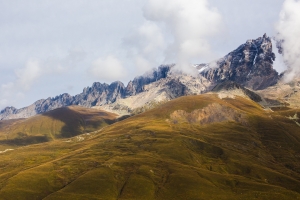 Mestia is a located in the upper Svaneti and is known as the regional capital of the area. With a population of just over 2600, the town is the main tourist centre for visitors to the Svaneti region. Preserved by its long-lasting geographical isolation, the mountain landscape of the Upper Svaneti region is an exceptional example of mountain scenery with medieval villages and tower houses.

Reminiscent of a Swiss alpine village, Mestia is a winter playground for skiers and a summer delight for trekkers and walkers. From a base in Mestia it is possible to explore the Svaneti region. Here you can hike up to the glaciers at the foot of mount Ushba, or take a horse and ride into the pristine alpine meadows. Newly built ski resorts at Hatsvali and Tetnuldi have begun to attract the attention of winter sports lovers from all over Europe and further afield.

For travellers on a tour of Georgia who are interested in the religious history of the Svaneti , there is plenty to stimulate the senses. Wonderful wall paintings, frescoes and icons can be found  in many of the churches around Mestia. The Church of Saint George contains well-preserved crosses and icons from the XII century and the Pusdi Church still contains fragments of XIII century wall paintings.

Preserved by its long-lasting geographical isolation, the mountain landscape of the Upper Svaneti region is an exceptional example of mountain scenery with medieval villages and tower houses.

One of the oldest cities in Europe, Kutaisi is the second city of Georgia. The elegant and tree lined streets combined with 19th century houses that stretch down to the banks of the Rioni River, make Kutaisi a delight to stroll around.

About 11km from Kutaisi you will find the UNESCO World Heritage site of Gelati Monastery. Described by UNESCO as ‘a masterpiece of the Golden Age of medieval Georgia’ the Gelati Monastery dates from 1106 and is certainly worth the trip from Kutaisi.

For a long time, the site at Gelati was one of the main cultural and learning centres in Georgia. The academy hosted the most celebrated Georgian scientists, theologians and philosophers. The Gelati Monastery contains many unique murals and manuscripts dating back to the 12th-17th centuries.

A bit further out from Kutaisi, but still easy to visit in a day is Prometheus Cave. It is a 40 minute drive to the village of Kumistavi and worthy of a day of your tour in Georgia. The Prometheus Cave is a labyrinth of stalactites, stalagmites, petrified waterfalls, underground rivers and lakes. The complex is neon-lit creating a spectacular sight. For some, playing Mozart as you travel around may be a bit touristy and over the top but for others it adds to the ambience.  The boat trip along the underwater river is a highlight.

One of the newly formed regions of Georgia, Kakheti is the place to visit for wine in Georgia. The small, pretty town of Kvareli is one of the best places to start if you wish to explore Georgian wine.  There are many vineyards in the Kakheti region and it is here that you will find the Kindzmarauli appellation where the Saperavi grape variety is used.

The wines from Kindzmarauli are slightly sweet with vivid berry fruit and hints of buttery toast. It is said to be a great combination with rich fruit cake, farmhouse cheeses or walnuts. We would suggest that you go and sample it for yourself!

GO TO BLOG
A tour of the Ivory Coast

Best Things to do in Algeria
Scroll to top